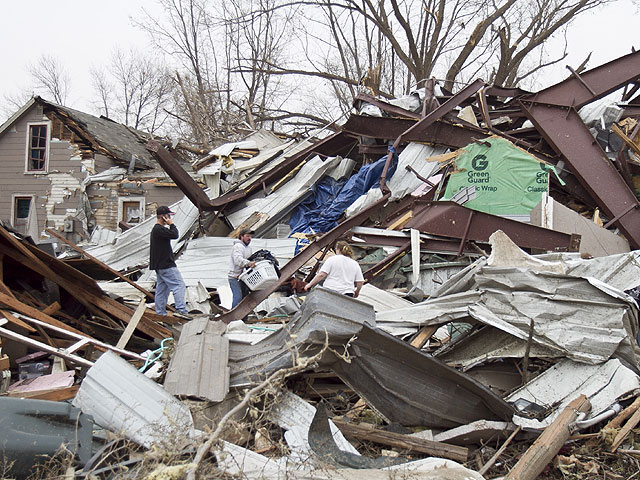 The Midwest is recovering from dozens of tornadoes that slammed the region over the weekend, and more violent weather could be on the way to millions, as storm warnings have been posted to nearly half the country.

The severe weather that plagued much of the Midwest this weekend continued Sunday evening, with tornados striking at least five counties in Wisconsin.

Elsewhere, residents in Norfolk, Neb., were dealing with hail as big as baseballs raining down, shattering windshields and denting hoods.

But hardest-hit over the weekend was the town of Mapleton in western Iowa. A category 3 tornado ripped through this city about 7:20 p.m. Saturday, packing winds of up to 165 miles per hour - the equivalent of a category five hurricane.

Officials say the unrelenting twister damaged more than half of the town, completely flattening 20 percent of it.

Sheriff Jeff Pratt said the tornado destroyed about 100 homes and displaced an estimated 500 to 600 residents, he said.

"We just saw debris flying around and then the tornado was coming down the road right here," said resident Jacob Zawodny.

No one was seriously injured. The weather service said it had received reports of 14 to 16 injuries, the most severe a broken leg.

In all, 27 tornadoes were reported in Iowa, and the governor has declared a state of emergency.

Emergency responders have not yet calculated an exact dollar amount for the losses in Saturday evening's storm that damaged or destroyed more than half of Mapleton. The Monona County sheriff said the recovery would likely cost millions of dollars, and Gov. Terry Branstad has promised state help.

Cleanup and rebuilding of this town of 1,200 is expected to take several months.

The huge, centuries-old trees the town was named for had been pulled out of the ground and wrapped around houses and tossed on top of cars. In one case, a huge motor home had been flipped on its side.

"It's not a pretty sight," Mayor Fred Standa said. "It's something nobody has seen in this town."

The tornado was on the ground for three-and-a-half miles and measured three-quarters of a mile wide at one point, according to the National Weather Service office in Valley, Neb. The twister was measured to be on the lower end of an EF3, which carries wind speeds of 136 to 165 mph.

More storms moved across the nation's midsection on Sunday evening and early Monday morning, with several homes damaged in Wisconsin amid reports of possible tornadoes.

In Mapleton on Sunday, Tamara Adams, 37, piled branches on the curb, next to the 30-foot-tall tree that rested on top of her house. She said she closed her outside basement door just as the tornado tore the roof off a store that sits diagonal from her house.

"That sound," she said. "I'll never get it out of my head. It had a life. You could hear it breathing and growling."

Terry Siebersma, who runs a downtown liquor store with his wife, was manning his shop when he heard the tornado sirens and saw the sky turn green. In the distance, he saw the twister swirl into view.

"It was almost like the movies," he said. "It was loud — really loud."

Siebersma, 53, said he rushed to the basement. Upstairs, he heard bottles breaking. He emerged several minutes later. He said he walked to a back storage room and discovered the roof missing and one wall on the verge of collapse.

"We were very, very lucky," he said. "I almost feel guilty."

Tom Sanford stepped carefully through his tornado ravaged home, his work shoes crunching on broken glass and wood splinters scattered across the floor. In the living room, next to his busted television, lay part of his neighbor's chimney.