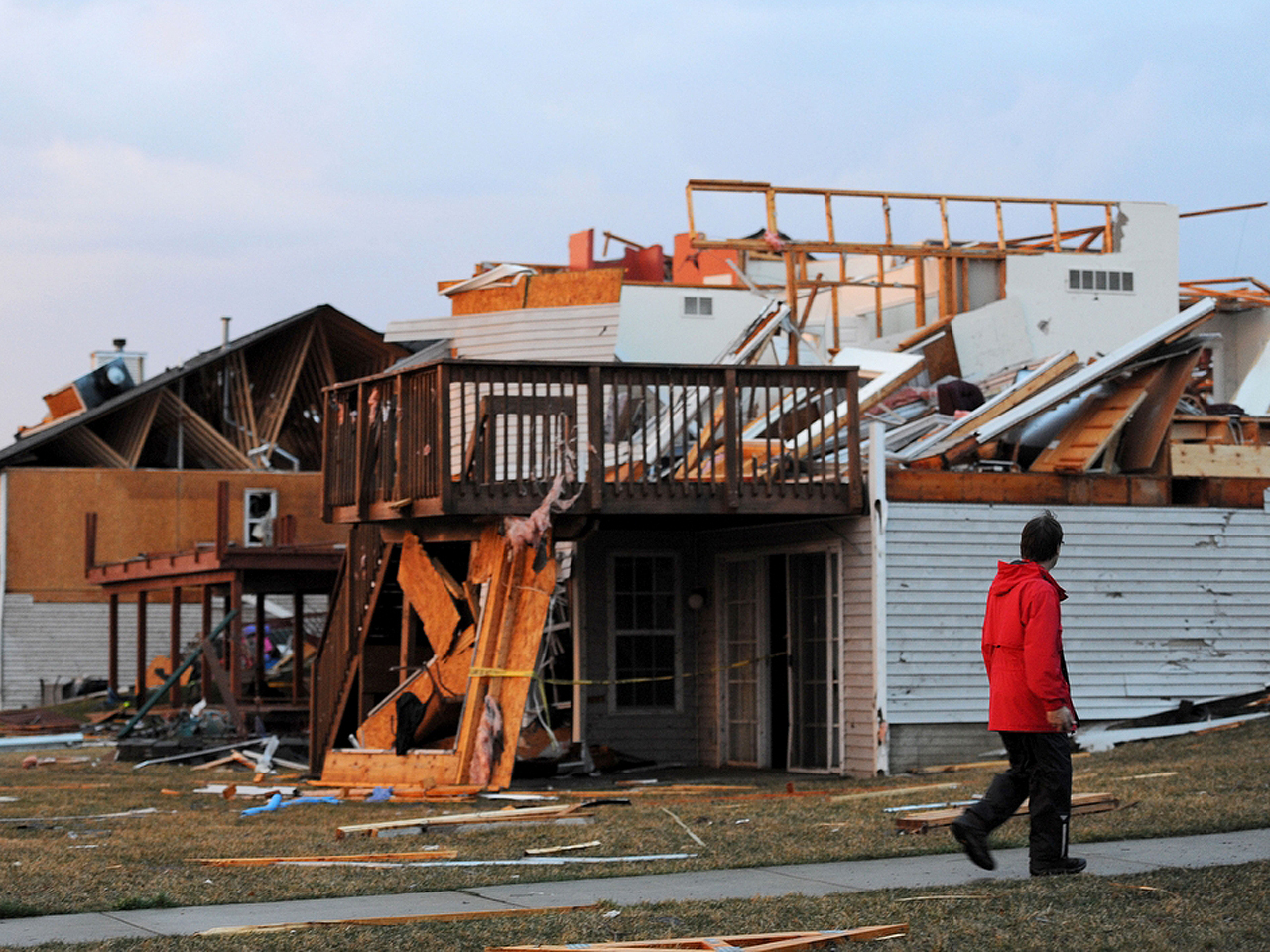 The slow-moving storm was part of a system packing large hail, heavy rain and high winds. The touchdown was reported in the Dexter and Pinckney areas northwest of Ann Arbor, said Marc Breckenridge, director of Emergency Management for Washtenaw County.

Crews were assessing damage, but in one neighborhood, a home appeared to be flattened while an adjacent home lost most of its roof and second floor. Houses across the street also sustained damage to their roofs and siding. There were no reports of serious injuries or fatalities, authorities said.

Sheriff's spokesman Derrick Jackson said 105 homes were significantly damaged in Dexter and the surrounding area, and 13 were destroyed.

Damage was concentrated in two subdivisions. About two dozen homes in Sharon Carty's Huron Farms neighborhood "are pretty much unlivable," she said. "And a significant number more than that are severely damaged. One house, the whole front of the house is gone. Folks whose houses were hit are pretty stunned. We don't get too many tornados around here."

She saw no evidence of any injuries.

Carty, 38, said she and her family heard the first weather siren about 5:15 p.m. and were in their basement when the tornado struck. Their house was untouched.

Jack Davidson, 63, said he was watching TV when he heard warning sirens go off twice near his home in Dexter, sending him and his wife to the basement.

When they emerged, Davidson said the couple at first didn't see much damage and thought the storm had spared the area. But one look across the street revealed a different reality: a flattened self-serve carwash was among the damaged structures.

"It's bad," Davidson said. "The pizza shop's bad. But the worst damage is to the carwash."

Two blocks away, the twister never touched down.

"I guess we were just lucky we were in the right spot," Davidson said.

Sheriff's Deputy Ray Yee was the first officer on the scene in one of the hard-hit subdivisions. He approached one destroyed home and saw a hand sticking out of the rubble. He pulled out an elderly man, who was shaken but walked away.

"That's the best part," Yee said. "Every place I went to, I would have thought I would have found somebody laying there — deceased or whatever. But, knock on wood, everybody was OK."

Still, destruction was a common sight in the village's business district.

A sign that declares Dexter a "Tree City USA" community was bent and affixed to a telephone pole. Nearby, trees lay on the ground, rendering surrounding roads closed or impassable.

There also were unconfirmed reports of tornados touching down in Monroe County's Ida Township and northwest Lapeer County, near Columbiaville, where trees and power lines had been downed, National Weather Service meteorologist Amos Dodson said. The storm packed wind gusts up to 70 mph in Lapeer County and 2-inch hail, he said.

Hemwall said a house in the town of Exeter was struck by lightning and debris swirled around another in Monroe County's Dundee.

No injuries were immediately reported, "but it's early," Hemwall said.

All roads into the village of Dexter were closed as darkness fell, with police diverting traffic. Area police and fire agencies were going door-to-door searching for any injured, Washtenaw County sheriff's spokesman Derrick Jackson said. People needing shelter for the night were directed to a local school.

Bill Marx, head baker at Dexter Bakery, said he was closing up shop when he noticed the change in the weather and heard storm sirens.

"I stepped outside and saw the clouds turning around," Marx said. "It was coming toward us. After it went by, it really started raining and hailing."

Eastern Michigan University in nearby Ypsilanti also was buckling down for the storm.

"We put out an all-campus notice to students to take cover, and a tornado warning is in effect," school spokesman Walter Kraft said.

The notices were sent out via text messages and emails, Kraft said.

Gavin said there have no reports of damage in or around the Ann Arbor hospitals.

"I'm sure a lot of people are pretty distraught," she said. "If you know people affected, encourage them to the shelter and get assistance."

Hawes said a second shelter opened nearby in Ann Arbor, where significant flooding forced the evacuation of an apartment complex.

Hawes said anyone wanting to donate can contribute through the Red Cross Disaster Relief Fund by calling (734) 971-5300 or online at www.wc-redcross.org.