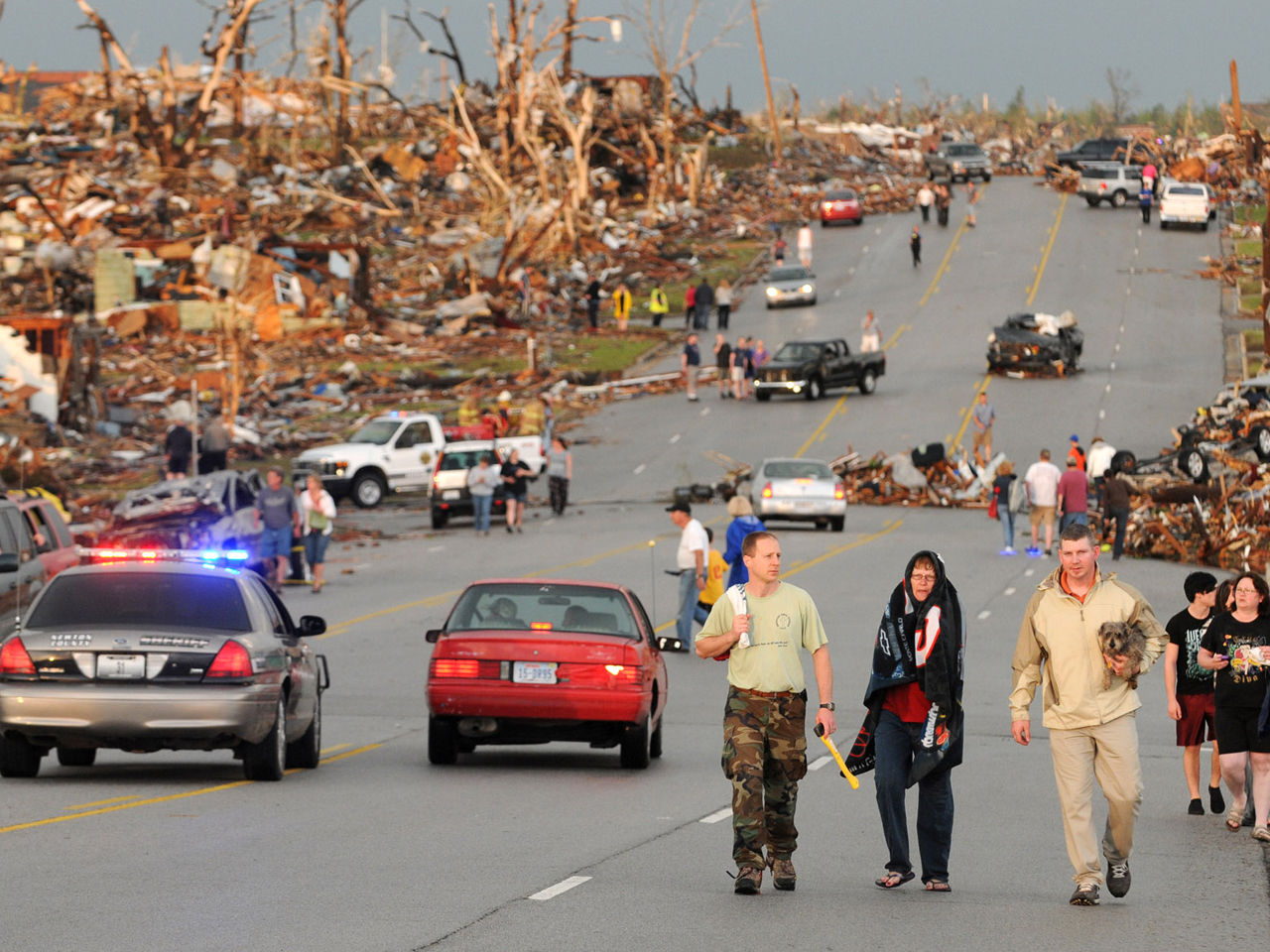 JOPLIN, Mo. — A massive tornado blasted its way across southwestern Missouri on Sunday, flattening several blocks of homes and businesses in Joplin and leaving residents frantically scrambling through the wreckage. A local official said as many as two dozen people may have been killed by the twister.

Hundreds of windows were blown out St. John's Regional Medical Center, where a few moments' notice gave staff time to hustle patients into hallways before the tornado struck the multistory building. All were quickly evacuated into the parking lot to be moved to other hospitals in the region.

The same storm system that produced the Joplin tornado spawned twisters along a broad swath of the Midwest, from Oklahoma to Wisconsin. At least one person was killed in Minneapolis.

A spokeswoman for the city of Joplin said the death toll could top two dozen, and there were fears that number was low.

Joplin spokeswoman Lynn Onstot was asked early Monday about an earlier report the storm had killed 24 people. She responded grimly that the city is "afraid it may be more. ... Our fear is that's a low number."

Officials struggling to communicate without power and cell phone service have been leery of putting a hard figure on a death toll. The Missouri National Guard is continuing its search for the injured throughout the night.

The storm that hit the city spread debris about 60 miles away, with medical records, X-rays, insulation and other items falling to the ground in Greene County, said Larry Woods, assistant director of the Springfield-Greene County Office of Emergency Management.

Emergency management officials rushed heavy equipment to Joplin to help lift debris and clear the way for search and recovery operations. Gov. Jay Nixon activated the National Guard and declared a state of emergency. Schools in the disaster zoned were flattened or severely damaged.

Phone communications in and out of the city of about 50,000 people about 160 miles south of Kansas City were largely cut off. Travel through and around Joplin was difficult, with Interstate 44 shut down and streets clogged with emergency vehicles and the wreckage of buildings.

On social networking sites, people with ties to Joplin and even those without were calling for prayers for the southwest Missouri city. Some people were quick to post that they and their families are OK, or to get the word out that loved ones are missing or homes were destroyed. Others found themselves without access to phones because of overburdened phone lines, but able to text and use social media.

Jeff Lehr, a reporter for the Joplin Globe, said he was upstairs in his home when the storm hit but was able to make his way to a basement closet.

"There was a loud huffing noise, my windows started popping. I had to get downstairs, glass was flying. I opened a closet and pulled myself into it," he told The Associated Press. "Then you could hear everything go. It tore the roof off my house, everybody's house. I came outside and there was nothing left."

He said people were walking around the streets outside trying to check on neighbors, but in many cases there were no homes to check.

"There were people wandering the streets, all mud covered," he said. "I'm talking to them, asking if they knew where their family is. Some of them didn't know, and weren't sure where they were. All the street markers were gone."

Resident Tom Rogers walked around viewing the damage with his daughter.

"Our house is gone. It's just gone," Rogers told The Joplin Globe. "We heard the tornado sirens for the second time. All of a sudden, everything came crashing down on us. We pulled our heads up and there was nothing. It was gone."

Tornado warnings were posted throughout the evening for other southwestern Missouri counties as the system powered its way east.

In Minneapolis, city spokeswoman Sara Dietrich said the death was confirmed by the Hennepin County medical examiner. She had no other immediate details. Only two of the 29 people injured there were hurt critically.

Though the damage covered several blocks in Minneapolis, it appeared few houses were totally demolished. Much of the damage was to roofs, front porches that had been sheared away, or smaller items such as fences and basketball goals.

In Wisconsin, the mayor of La Crosse declared a state of emergency Sunday after a severe storm hit, tearing roofs from homes and sending emergency responders. No one was seriously injured.

Sunday's storms followed a tornado Saturday night that swept through a small eastern Kansas town, killing one person and destroying at least 20 homes, as severe thunderstorms pelted the region with hail that some residents described as the size of baseballs, authorities said Sunday.

Kansas Division of Emergency Management spokeswoman Sharon Watson identified the victim as Don Chesmore, 53, of Reading. He was in a mobile home that flipped. He was taken to a hospital in Emporia, where he was pronounced dead.

Additional storms were predicted across the southern Plains through Thursday morning.

An advisory from the Storm Prediction Center in Norman, Okla., said warm weather Monday could fuel instability in advance of another weather system. A few tornadoes, some strong, could occur — starting in Oklahoma and southern Kansas in the afternoon and in North Texas in the late afternoon.