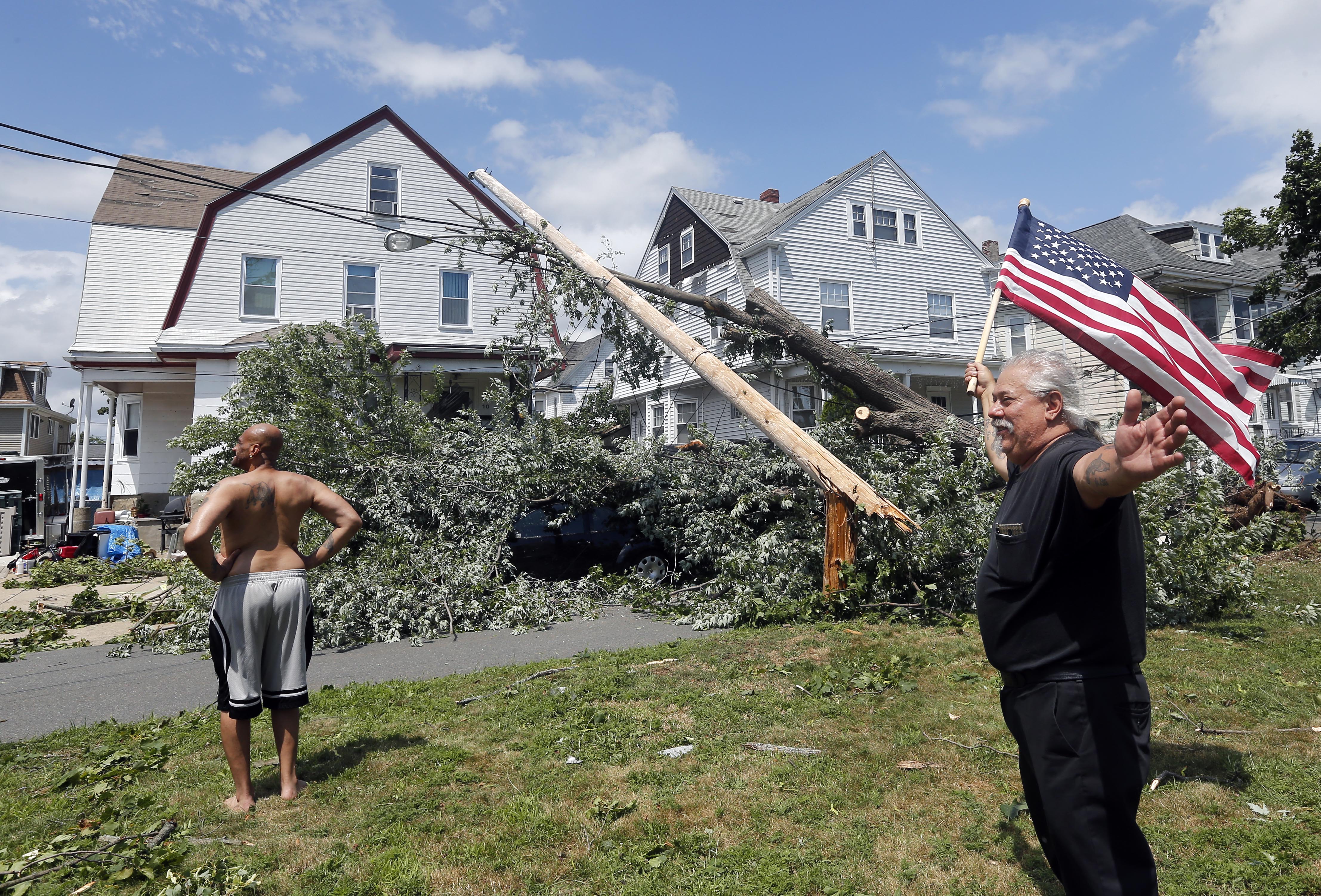 REVERE, Mass. -- A storm system that wreaked havoc across the eastern half of the U.S. spawned a tornado just north of Boston on Monday, causing extensive damage in Revere, where roofs were ripped off buildings and dozens of large trees were uprooted.

Officials in Revere, a coastal city of about 53,000, said there no immediate reports of serious injuries, but several people suffered minor injuries, including a baby who was in a car and hurt by flying glass and an elderly woman who suffered cuts.

"Given the magnitude of the storm, it's really a miracle that no one sustained more serious injuries," said Revere Mayor Dan Rizzo.

Revere Deputy Fire Chief Viviano told WBZ News Radio: "Never in my life have I seen anything like this, we are just getting inundated with hundreds of 911 calls."

Viviano said cars were crushed and windows were blown out.

Communities across the U.S. were cleaning up Monday after strong storms destroyed homes, knocked out power for thousands of people and toppled power lines and trees.

The tornado was spawned by a powerful storm that moved through the Boston area shortly after 9 a.m. Viviano said dozens of residents reported partial building and roof collapses, and downed trees and power lines.

Paul and Patty Carrabes said they were both at work when the wind tore the roof off their home.

"I probably would have died if I was in there," said Patty Carrabes said.

One Revere resident posted an Instagram video of the twister's aftermath:

Bob Cronin, the city's sealer of weights and measures, said he was in City Hall when the tornado hit.

Cronin said City Hall was damaged, as were a number of businesses. One auto body shop had its roof ripped clean off, Cronin said.

"This isn't something you expect to happen when you wake up in the morning," he said.

The National Weather Service's office in Massachusetts said it was the first tornado in Suffolk County, which includes the city of Boston and the northern communities of Revere, Chelsea and Winthrop, since the agency began keeping records on them in 1950.

Rizzo said City Hall was evacuated due to damage and will likely be closed for a couple of days. He said he expected the city to open a shelter for any residents who are unable to stay in their homes.

In eastern Tennessee, officials said there were no reports of any deaths or injuries from Sunday's storms, though at least 10 homes were destroyed. Claiborne County emergency management spokeswoman Gina Breeding told The Associated Press it wasn't clear whether the destruction was the result of a tornado, but noted there were strong winds, lightning and heavy thunderstorms.

Massive hail also was reported in Michigan, where winds toppled trees and ripped the roofs off buildings. And in Ohio, some roads had been blocked by flash flooding. In Pennsylvania, nighttime storms knocked out power to thousands.