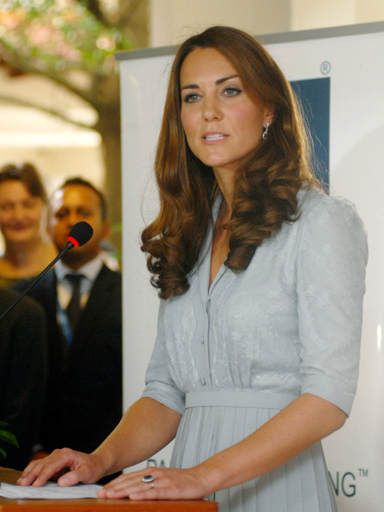 (AP) PARIS — Photos apparently of Prince William's wife, Kate, sunbathing topless in the south of France were published in a French magazine Friday, and an aide to the royal couple said they were "hugely saddened" to learn about the images.

The royal family said it was considering legal action for a "grotesque and totally unjustifiable" invasion of privacy in the same country where William's mother died while fleeing paparazzi.

The photos in Closer, a magazine that's among a newly popular French genre of gossip tabloids, were blurry and shot from a distance. The publication claimed they were taken on a guesthouse terrace in France where the couple vacationed this month.

They represent the first significant press challenge for Kate and William, whose mother Princess Diana died in a Paris car crash while being chased by photographers. Royal officials, who demanded anonymity in line with palace policy, condemned the decision to publish the images.

"The incident is reminiscent of the worst excesses of the press and paparazzi during the life of Diana, Princess of Wales, and all the more upsetting to the Duke and Duchess for being so," said a St. James's Palace official.

"We feel a line has been crossed with their publication," said another British royal official.

William and Kate, who is now known as the Duchess of Cambridge, were touring the Far East and South Pacific to mark Queen Elizabeth II's Diamond Jubilee, and a royal aide with them in Malaysia said the couple "are saddened to learn about the alleged photos."

The palace official in London said representatives of the couple were consulting with lawyers.

"Their Royal Highnesses had every expectation of privacy in the remote house. It is unthinkable that anyone should take such photographs, let alone publish them," the official said.

No major British publication carried the photos on Friday, including the top-selling U.K. tabloid The Sun, which last month ran photos of a naked Prince Harry cavorting in a Las Vegas hotel room.

A lawyer who is expert in French media law said the couple would have clear grounds for a case of invasion of privacy. Last week, French First Lady Valerie Trierweiler won a judgment of 2,000 euros after the publication of photos of her in a bikini.

"French magistrates take into account the victim's behavior, when the person is flaunting themselves on camera. Kate Middleton will get damages because she's not behaving in this way," said the lawyer, Anne Pigeon-Bormans.

She said Princess Diana's relationship with the press was more complicated.

"Diana and Kate are two very different people. Diana had an unhealthy relationship with the press, there was an ambiguity: she would flee them, then court them," she said. "I don't feel that with Kate Middleton, she is more balanced."