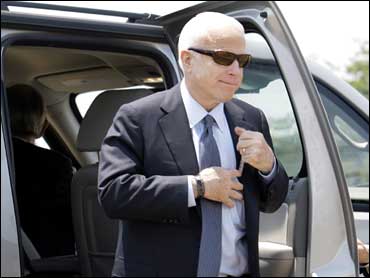 
Steve Schmidt is taking over the day-to-day operation of John McCain's campaign, according to multiple campaign sources.

At a staff meeting in the campaign's Arlington, Va., headquarters this morning, campaign manager Rick Davis made the announcement about Schmidt's new role.

Schmidt, a bald and barrel-chested operative known for his aggressive brand of political combat, responded by exhorting campaign aides with a speech that one staffer likened to a locker room pep talk out of the football movie "Rudy."

After the meeting, on a regularly scheduled conference call with McCain's 11 regional campaign managers, senior staff briefed the field aides about the move, explaining Davis would focus more on long-range tasks while Schmidt was taking an enhanced daily role, said an indivdual on the call.

McCain sources say Schmidt, who ran Gov. Arnold Schwarzenegger's reelection campaign and was a top communications aide in Bush-Cheney '04, will coordinate the campaign's daily pro-McCain and anti-Obama message but also will have an increased role in shaping most every facet of the organization including scheduling, policy, coalitions and surrogates.

Davis will focus more on big-picture issues such as general strategy, helping to plan the convention, picking a vice president and tending to the needs of major donors.

Schmidt has been serving as a senior McCain adviser for months and had recently returned to headquarters to help bolster the Republican nominee's message operation.

The move comes a year to the day after McCain laid off dozens of staffers as part of a cost-cutting measure that what would ultimately spur a major overhaul of his campaign.

Now, accounts diverge on the exact nature of the new chain of command. One top McCain source said that Schmidt "assumed full operational control of the campaign today" and described Davis as "a general manager."

But Charlie Black, another top adviser, said Davis was still in charge.

"Steve is going to function under Rick as a [chief operating officer]," Black said. "Rick still has authority over all things. Steve works for Rick."

But Black made sure to not diminish Schmidt's elevated role in the campaign.

"He'll be the maestro who conducts the symphony," Black said of Schmidt's position in driving McCain's message.

Yet McCain sources say Schmidt's imprint will be felt beyond a campaign message that, until recently, had not been clearly defined.

A handful of his fellow Bushworld veterans are also taking on more high-profile roles.

Mike DuHaime, the former Rudy Giuliani campaign manager and RNC political director who had been split between the RNC and McCain, is likely to take an enhanced role in the campaign.

Further, there is likely to be more structure brought to a political operation that has largely been delegated to the Regional Campaign Managers. The campaign currently has no political or field director.

Helping Schmidt drive the new daily message will be Matt McDonald, also a veteran of the Schwarzenegger campaign and Bush-Cheney reelection effort, who just started at the campaign a few weeks ago.

McDonald is working with McCain's press shop in trying to get on offense, sharpening attacks on Obama and pushing a more consistent narrative against the Democrat.

Also coming on board is Taylor Griffin, a former White House and Treasury spokesman, to work closely with reporters and push the campaign's economic message.

Perhaps most important for the campaign's image is the addition of Greg Jenkins, a veteran advanceman who ran presidential advance in the Bush White House. Jenkins, also an aide on Bush's 2000 campaign, is working to ensure better stagecraft of McCain's events and to avoid a reprisal of the much-mocked green background behind McCain at a high-profile speech last month.

One source familiar with the inner workings of McCain's campaign said that the move came after a sluggish ramp-up to the general and number of unforced errors had left the candidate, senior staff and elected officials unhappy with the state of the campaign.

"This will help reassure the chattering class in D.C.," said the source.
By Jonathan Martin