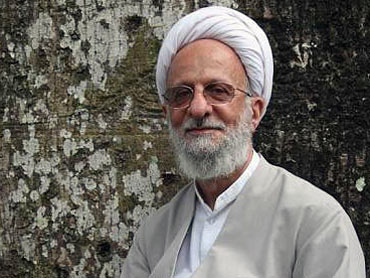 The hardline spiritual mentor of Iran's president has made a rare public call for producing the "special weapons" that are a monopoly of a few nations - a veiled reference to nuclear arms.

The Associated Press on Monday obtained a copy of a book written by Ayatollah Mohammad Taqi Mesbah Yazdi in which he wrote Iran should not deprive itself of the right to produce these "special weapons."

Iran's government, as well as its clerical hierarchy, have repeatedly denied the country is seeking nuclear weapons, as alleged by the U.S. and its allies.

The Security Council last week imposed a fourth round of sanctions in response to Tehran's refusal to halt uranium enrichment, which Iran maintains is only for its nuclear energy program, but could conceivably be used to produce material for weapons.

The new U.N. sanctions call for an asset freeze of another 40 additional companies and organizations, including 22 involved in nuclear or ballistic missile activities.

Yazdi's hardline views, including devotion to the Mahdi, a messiah-like figure to reappear ahead of judgement day, have had a strong impact on Ahmadinejad, who shows him more respect than any other senior cleric.

Yazdi's book, "The Islamic Revolution, a Surge in Political Changes in History," was written in 2005 and then reprinted last year, but would have only had a very limited circulation among senior clerics and would not have been widely known.

"The most advanced weapons must be produced inside our country even if our enemies don't like it. There is no reason that they have the right to produce a special type of weapons, while other countries are deprived of it," Yazdi said.

Yazdi is a member of the Assembly of Experts, a conservative body of 86 senior clerics that monitors Iran's supreme leader and chooses his successor. He also heads the Imam Khomeini Educational and Research Institute, an Islamic think tank, in the holy city of Qom, 80 miles (130 kilometers) south of the capital.

In his book, Yazdi said Iran must acquire the necessary deterrent weapons in order to be able to stand up to its enemies.

"Under Islamic teachings, all common tools and materialistic instruments must be employed against the enemy and prevent enemy's military superiority," he said.

He also said Muslims must not allow a few powers to monopolize certain weapons in their arsenal.

"From Islam's point of view, Muslims must make efforts to benefit from the most sophisticated military equipment and get specific weapons out of the monopoly of powerful countries," he said.

The last time a high ranking official made such remarks was in 2005 when Mohammad Javad Larijani, now a senior judiciary official, said Islam has not tied Iran's hands in producing nuclear weapons.

But Iran's Supreme Leader Ayatollah Ali Khamenei, who has the final say on all state matters, has repeatedly denied that Tehran was seeking nuclear weapons because Islam forbids weapons of mass destruction.

Khamenei has reportedly issued a fatwa, or religious decree, saying the production, stockpiling and use of nuclear weapons was forbidden under Islam.

In May, a senior reformist cleric warned about the increasing power of Yazdi and his loyalists within the ruling system, calling them "a very dangerous and harsh current who won't show mercy to anybody."

Earlier this month, a hardline website called Yazdi an "Imam", a title given only to Shiite Islam's saints and the founder of the Islamic Republic, the late Ayatollah Ruhollah Khomeini. Such a title has not been awarded to Khamenei, Iran's current leader.