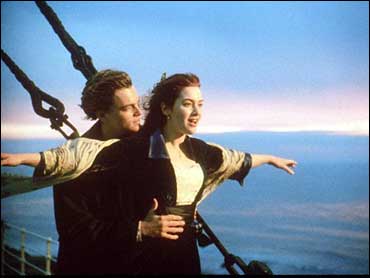 Although "Titanic" soared at the box office in 1997, according to a recent survey, its most memorable line -- "I'm the king of the world!" - sunk.

British baker Warburtons posed the question "What are your top three cheesiest moments in film?" to 2,000 U.K. moviegoers in celebration of the launch of their new cheese-flavored crumpets.

The line uttered by Leonardo DiCaprio was followed by Patrick Swayze's "Nobody puts baby in the corner" from 1987's "Dirty Dancing" and Andie McDowell's "Is it still raining? I hadn't noticed," from the end of 1994's "Four Weddings and a Funeral."

Warburtons reports that surveyed women opted for romantic comedy moments from films such as "Notting Hill" and "Jerry Maguire" while men preferred silly scenes from action flicks like "Top Gun" and "Braveheart." Despite the gender divide, 33 percent of the overall vote unanimously agreed on the "Titanic" yell as the cheesiest moment.

2. "Dirty Dancing": Patrick Swayze's "Nobody puts Baby in the corner."

3. "Four Weddings And A Funeral": Andie McDowell's "Is it still raining? I hadn't noticed."

5. "Top Gun": Val Kilmer to Tom Cruise: "You can be my wingman anytime"

8. "Braveheart": Mel Gibson's "They may take our lives, but they will not take our freedom!"

9. "Jerry Maguire": Renee Zellweger to Tom Cruise: "You had me at hello."