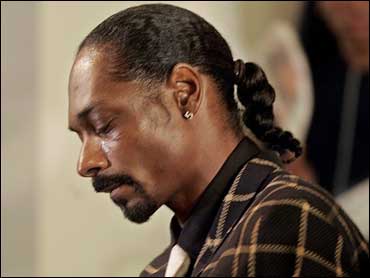 Celebrities from hip-hop star Snoop Dogg to motivational speaker Tony Robbins lamented the execution of Stanley Tookie Williams at a funeral Tuesday that drew hundreds to the violence-wracked area where Williams founded the murderous Crips gang three decades ago.

Under heavy police presence, mourners including gang members flashing hand signs waited in line to enter the 1,500-seat Bethel AME Church for a ceremony that stretched more than four hours.

After the service, many of those outside the church dropped to the ground after hearing what sounded like three gunshots about a block away, but there were no injuries and no arrests.

Vendors sold T-shirts with Williams' picture, and a large TV set up in the parking lot allowed the overflow crowd to watch the service. Williams was executed Dec. 13 despite clemency pleas from celebrities and others who said he had rededicated his life to peace.

"It's nine-fifteen on twelve-thirteen and another black king will be taken from the scene," Snoop Dogg told mourners, reciting a poem about the execution. The line "I don't believe Stan did it" drew wild applause in the parking lot.

Williams, 51, was put to death by injection at San Quentin Prison for the 1979 shotgun murders of a 7-Eleven clerk and three motel owners.

"The war within me is over. I battled my demons and I was triumphant," Williams said in a recording played to mourners, whom he asked to spread a message to loved ones.

"Teach them how to avoid our destructive footsteps. Teach them to strive for higher education. Teach them to promote peace and teach them to focus on rebuilding the neighborhoods that you, others and I helped to destroy."

The Rev. Jesse Jackson decried the execution of Williams, who Jackson said saw himself in the end as a "healer, not a predator."

Robbins told the mourners he knew Williams only a short time but said he had "so much rage and so much anger" after his execution.

While on death row, Williams wrote children's books warning against gang life. Those efforts attracted supporters who lobbied for clemency, arguing Williams had redeemed himself. But Gov. Arnold Schwarzenegger was unconvinced, and refused to spare his life.

Several dozen gang members wearing blue attire associated with Crips gangs watched the funeral in the parking lot. One who identified himself as "Killowatt the Third," age 33, estimated there were 20 to 30 Crips-affiliated gangs there to honor Williams.

Al Birdsong, 54, a school security officer who waited for hours to get into the funeral, said Williams did not deserve to be executed after more than two decades in prison.

"I'm here to pay my respects to humanity, and that goes to Tookie and everyone else they do in. ... What if it was your son?" Birdsong said. "He's no different from any other human being. We all made mistakes."

Keelonnie Roberts, 23, of Torrance, said her father was a Crip who used to tell her tales of gang life. Although Roberts never met Williams, she said, "He seemed like a sweet man to me."

Mourner Rick Hayes, 36, of Compton, wore a T-shirt with the slogan, "What does redemption mean ...," which he had made. If Williams was unable to earn clemency from the governor, "what can a black man do, what can he do in society, to get another chance at life?" Hayes asked.

In his will, Williams asked that his remains be cremated and the ashes scattered over South Africa.

Tuesday's ceremony was not the first public funeral for an executed inmate.

About 300 people attended a San Francisco service for Robert Alton Harris, a murderer whose 1992 execution was the first in 25 years after a death penalty ban and became a rallying point for opponents of capital punishment.