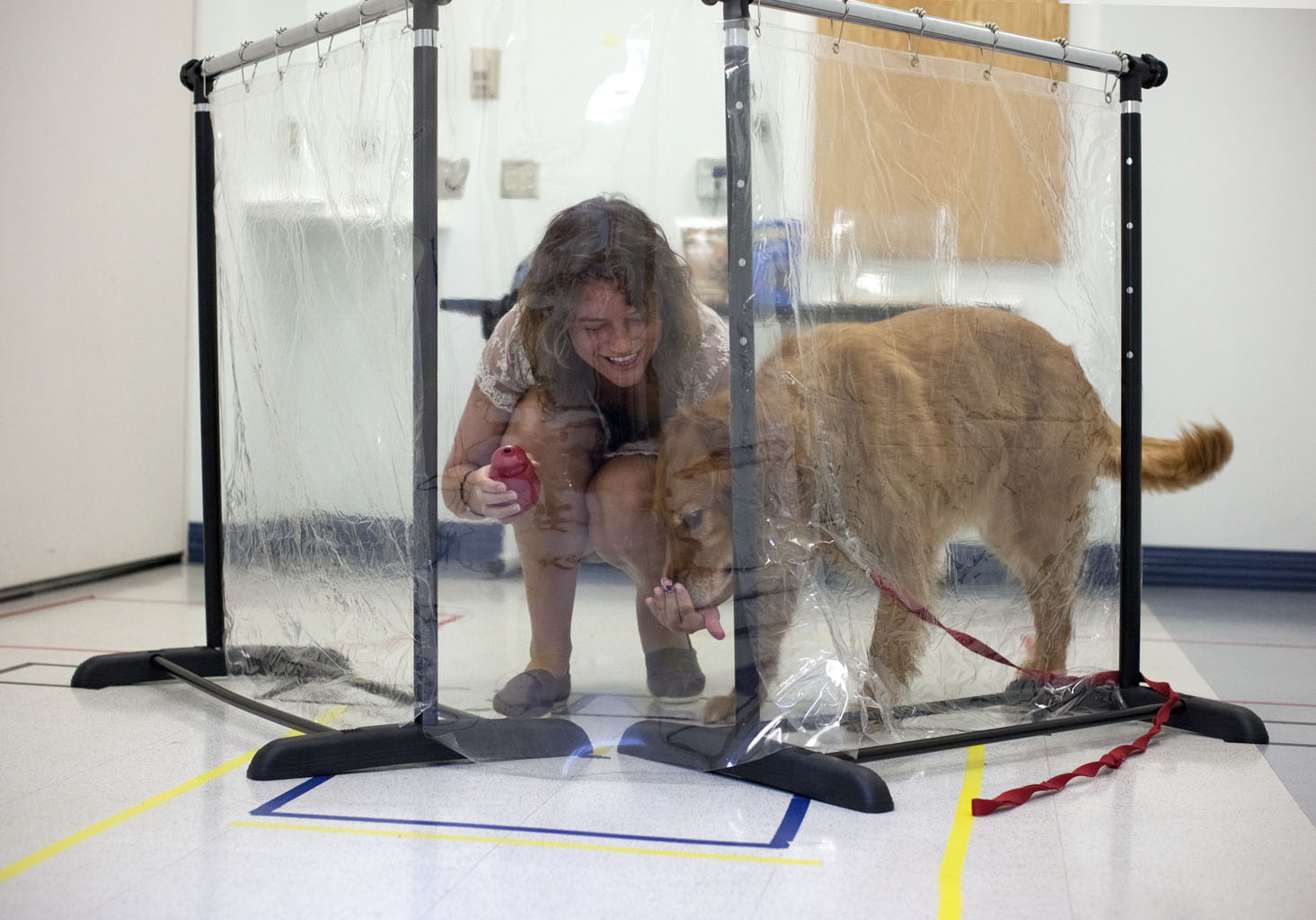 People tend to perform better when they are a little bit anxious and they sense a lot is at stake - whether that be at a job interview or a big speech.

Well, it turns out dogs do, too.

But much like people, a new study in the journal Animal Cognition found too much stress can send dogs into a tizzy. Researchers at Duke found that a little extra stress and stimulation makes hyper dogs crack under pressure but gives mellow dogs an edge.

"When you're taking a test, for example, it helps to be a little bit anxious so you don't just blow it off," said study co-author Emily Bray, who was an undergraduate at Duke at the time of the study. "But if you're too nervous, even if you study and you really know the material, you aren't going to perform at your best."

Researchers first observed this pattern known in psychology as Yerkes-Dodson law more than a hundred years ago in lab rats. It has since been demonstrated in chickens, cats and humans.

In the new study, Bray and evolutionary anthropologists Evan MacLean and Brian Hare of Duke's Canine Cognition Center wanted to find out if the conditions that enable certain animals to do their best are dependent on the animal's underlying temperament.

In a series of experiments, the researchers challenged dogs to retrieve a meat jerky treat from a person standing behind a clear plastic barrier. To get it right, the dogs couldn't take the shortest path to reach the treat - which would only cause them to bump into the barrier and hit their heads. Instead, they had walk around the barrier to one of the open sides.

In one set of trials, an experimenter stood behind the barrier holding a treat and called the dog's name in a calm, flat voice. In another set of trials, the experimenter enthusiastically waved the treat in the air and used an urgent, excited voice.

The researchers studied video recordings of 30 pet dogs from a variety of breeds, ranging in age from an eight-month-old Jack Russell terrier named Enzo to an 11-year-old Vizsla named Sienna, to estimate their baseline temperament in terms of tail wags per minute. They also tested 76 assistance dogs at Canine Companions for Independence in Santa Rosa, California, a non-profit organization that breeds and trains assistance dogs for people with disabilities.

Pet dogs typically receive nothing more than obedience training, while the service dogs get intensive training and are often required to control themselves in the face of arousal or distraction. The service dogs, in contrast to pets, also go through a selective vetting process and often are known for their "placid temperament."

"The service dogs were generally more cool in the face of stress or distraction, whereas the pet dogs tended to be more excitable and high-strung," Bray said, adding that both groups of dogs were able to solve the puzzle in most cases.

The study found that while the service dogs had better success staying on task when things were a little more lively, more excitable pet dogs did better when arousal levels were low.

For those excitable dogs, that extra stimulation only made things worse. In one high-arousal trial, a two-year-old spaniel named Charlie Brown fell apart, barking and zipping around crazily until she almost ran out of time.

"In the first five trials she did fine and solved the puzzle quickly with no problems," Bray said of Charlie Brown.

"Then when the high-arousal trials started, she choked. She just couldn't figure it out," she said. "Adding more excitement pushed the pet dogs over the edge and impaired their ability to perform at their peak."

To rule out age and the size of dogs as a factor, the researchers removed the smallest third and the oldest third from the final results.

Researchers said the findings could offer ways for pet owners to better manage their dogs.

"It shows one size doesn't fit all," Bray said. "Using an excited tone of voice will probably give you optimal results if you're working with your low energy pet, but it's best to keep your voice neutral when working with your dog that's always bouncing off the walls."

Bray said the results could also lead to improved tests to determine which dogs are likely to graduate from service dog training programs and which will perform better once they are out in the field.

"This principle applies when training working dogs as well. For example, IED detection dogs need high levels of energy to perform at their best, whereas service dogs, who often need to sit quietly under a desk or chair while their handler is at work, tend to be more docile," she said. "These two different types of working dogs will be more successful at learning and solving problems when they are exposed to very different energy levels, respectively."