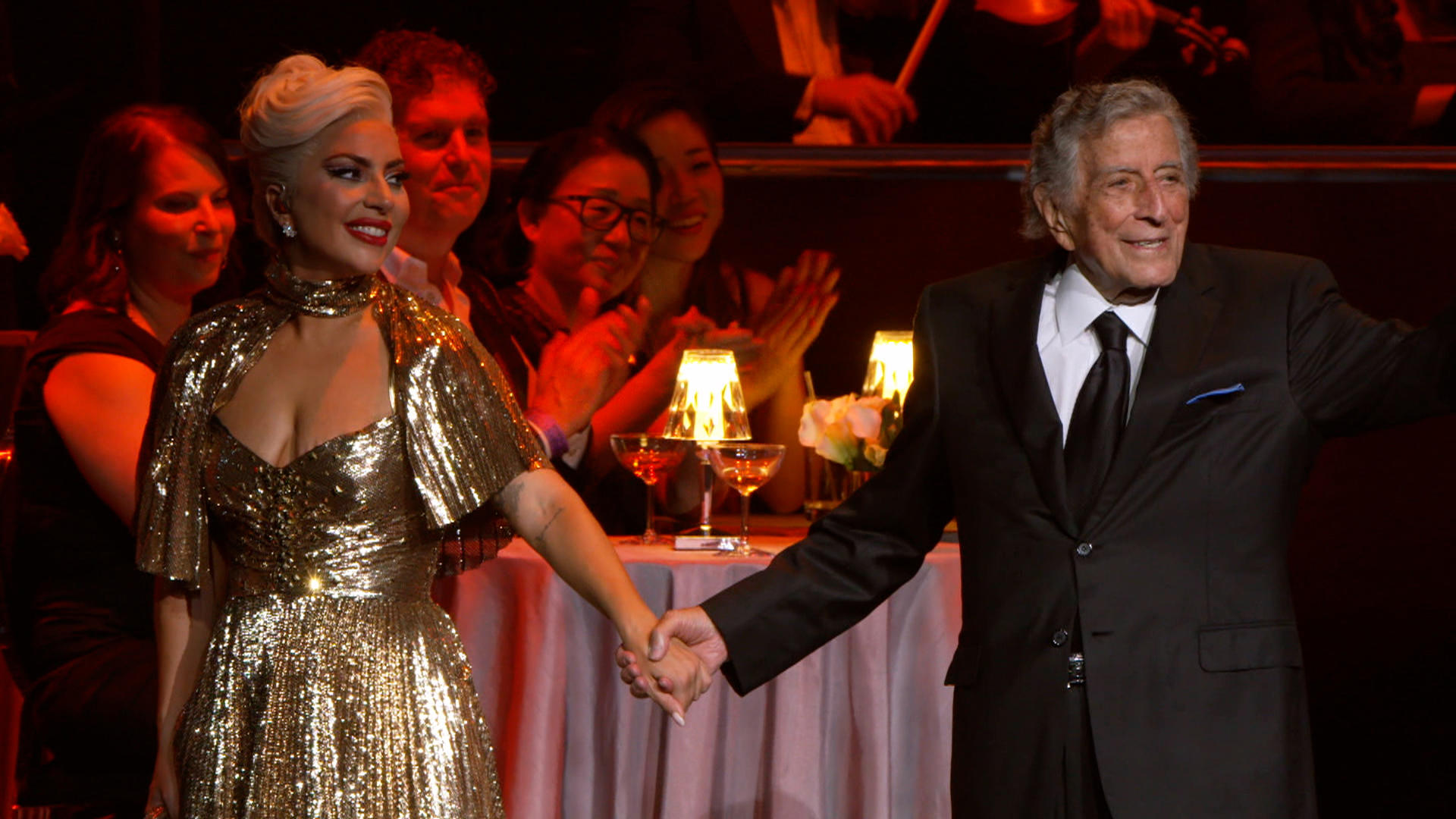 When Tony Bennett's family announced he had Alzheimer's Disease in February of 2021, few of the then 94-year-old singer's fans imagined they'd ever see him on stage again. But last summer, with his family's help, he began rehearsing for two concerts at Radio City Music Hall, with his friend Lady Gaga. No one knew for sure if Tony would be able to pull it off, but his family believed that Tony's story could give hope to others struggling with Alzheimer's. And they invited us to follow him preparing for, what would likely be, his final act.

Tony Bennett has been singing hits and swinging jazz for seven decades.

But for Tony, now, those years are a dim memory, lost in the fog of dementia from Alzheimer's. He spends much of his time in his New York apartment looking through books and old photos.

We met Tony and his wife, Susan, last June, a few weeks before his 95th birthday.

Anderson Cooper: Is that Bob Hope?

Susan Benedetto: They sent that for your 75th birthday. And in a month and a half, you're gonna be 95. (LAUGH) How about that?

Anderson Cooper: Do you feel 95? You don't look it.

Susan Benedetto: How old do you feel, Tone?

Tony has his good moments, but Susan has to do most of the talking. She says he first grew concerned about his memory six years ago.

Susan Benedetto: We came home one night, and he said, "Susan," he said, "I'm having a hard time remembering the names of the musicians." And--

Anderson Cooper: The musicians he was playing with?

Susan Benedetto: Yeah, on s-- who he works with all the time. And so it was unusual. And I said, "Well, do you wanna go see a doctor about it?" And he said, "I do."

Anderson Cooper: Did you know right away that it was Alzheimer's?

Dr. Gayatri Devi is Tony's neurologist. She diagnosed him in 2017.

Anderson Cooper: Do you know what is happening in-- in Tony's brain?

Dr. Gayatri Devi: No one really knows. But I know that his hippocampus, which is the Grand Central Station of memories-- and the conduit through which we retrieve memories as well as lay down memories is not working very well.

Susan and Tony have been together for more than 30 years, she's now his full-time caregiver.

Anderson Cooper: How much does Tony understand about what's going on around him at any given time?

Anderson Cooper:  I mean, he recognizes you.

Susan Benedetto: He recognizes me, thank goodness, his children you know, we are blessed in a lotta ways. He's very sweet. He doesn't know he has it.

Anderson Cooper: He doesn't know he has Alzheimer's.

What he does know is that he's at home, not performing on stage. He'd continued to sing after his diagnosis, but the pandemic took him off the road. Susan says it's been hard on him.

Susan Benedetto: It was Gayatri Devi, our doctor, who said, "If he wants to sing let him sing, because that's the best thing for him." You know, all the meds and all the treatments they do to stimulate your brain, for him, there's nothing more stimulating than performing.

Tony's oldest son and manager, Danny Bennett, came up with the idea of the Radio City concerts last August with Lady Gaga. It was broadcast on CBS this past fall.

Danny Bennett: The pandemic was a big-- (SIGH) it was a big thing for me. Like, an-- ending his career on-- on that note--

Danny Bennett: Couldn't end that way. After all that he'd-- he did.

Tony and Lady Gaga released their first album together in 2014.

In 2018, he was able to record another album with her, which was released this past fall.

By last June, however, his disease had progressed and Susan told us she wasn't sure exactly what would happen at the planned Radio City concert.

But when it was time to rehearse, something incredible happened. Tony's accompanist, Lee Musiker, began playing, and suddenly the legendary showman was back.

He had no notes, no cue cards.

We were amazed, all his old songs were somehow still there. He sang an hour-long set from memory.

Anderson Cooper: You just start playin' something and it's all there?

Lee Musiker: When I start playing, Tony is completely engaged, and this is a whole new performance and new phrases, new nuance. Nothing short of a miracle.

Dr. Gayatri Devi explained how a transformation like that was possible.

Dr. Gayatri Devi:  People respond differently depending on their strengths. In Tony's case, it's his musical memory, his ability to be a performer. Those are an innate and hard-wired part of his brain. So even though he doesn't know what the day might be or where his apartment is, he still can sing the whole repertoire of the American Songbook and move people.

Anderson Cooper: How does music stimulate the brain?

Dr. Gayatri Devi: It engages multiple different parts of the brain, right? So there's the auditory cortex for hearing. There is the part of the brain that deals with movement and dance. There is the visual system that gets engaged So it's kind of like a whole-brain-- activator.

Tony could remember the songs, but could he remember how to perform them in front of thousands of people? Lady Gaga knew it wasn't going to be easy.

Lady Gaga: And you know, Anderson, for the first couple of weeks that I saw Tony since COVID, he called me, "Sweetheart." But I wasn't sure he knew who I was.

In rehearsals last July, she found new ways to connect and communicate with her old friend - when asking him questions she'd keep it simple.

Lady Gaga: When that music comes on (SNAP), it's-- something happens to him. He knows exactly what he's doing. And what's important for me, actually, just to make sure that I don't get in the way of that.

On opening night last August, Radio City's 6,000 seats were sold out. It was Tony's 95th birthday and his fans were waiting.

Lady Gaga opened the show. Backstage, Susan did her best to remind Tony what was happening.

Susan Benedetto: And then you're gonna sing. OK?

Tony Bennett: How many songs am I singing?

Susan Benedetto: I'll tell you what you're gonna sing.

When it was time, they walked toward the stage together. Then, the lights went out and the curtain went up.

Susan Benedetto: Well once he saw the audience, and, you know, and he raises his hands, he's-- I knew we were alright because he became himself. He just turned on. You know, it was like a light switch.

There may have been a few missteps, but the crowd didn't care - it was Tony's night and the old crooner was in command.

He sang more than a dozen songs and got at least 20 standing ovations.

When it came time for Lady Gaga to join him for some final duets, listen to what Tony said as she appeared on stage…

Lady Gaga: That's the first time that Tony said my name in a long time.

Anderson Cooper: Really in all the weeks leading up to it, he hadn't said your name… wow.

Lady Gaga: I had to keep it together, because we had a sold out show, and I have a job to do. But I'll tell you, when I walked out on that stage, and he said, "It's Lady Gaga," my friend saw me. And it was very special.

And at the end of the night, Lady Gaga was there to walk Tony Bennett off the stage one last time.

Lady Gaga: It's the last thing that I-- said to Tony on stage was-- "Mr. Bennett, it would be my honor if I could escort you off the stage." And he said, "Okay." And I did. And, just simply being the woman that got to walk him off stage, that's enough for me.

Lady Gaga: You were so amazing.

Tony Bennett: The public loved it.

Lady Gaga: They did, you were, you were spectacular… Everybody Mr. Tony Bennett!

Susan Benedetto: I thought it was a triumph really. It's, like-- you know, climbing Mt. Olympus, and he made it.

A few days after that triumph, we met Tony and Susan on their daily walk in Central Park.

Anderson Cooper: How did you feel about the concert the other night?

Tony Bennett: I don't know what you mean.

Anderson Cooper: I saw you at Radio City. You did a great job.

Tony had no memory of playing Radio City at all.

Lady Gaga: No. It's not a sad story. It's emotional. It's hard to watch somebody change. I think what's been beautiful about this, and what's been challenging, is to see how it affects him in some ways, but to see how it doesn't affect his talent. I think he really pushed through something to give the world the gift of knowing that things can change and you can still be magnificent.

Tony Bennett's album with Lady Gaga, released this past fall, won two Grammy awards. He turns 96 in August and his wife, Susan, tells us Tony is still singing all his old songs every week at home.

Eurovision: Inside the European song contest