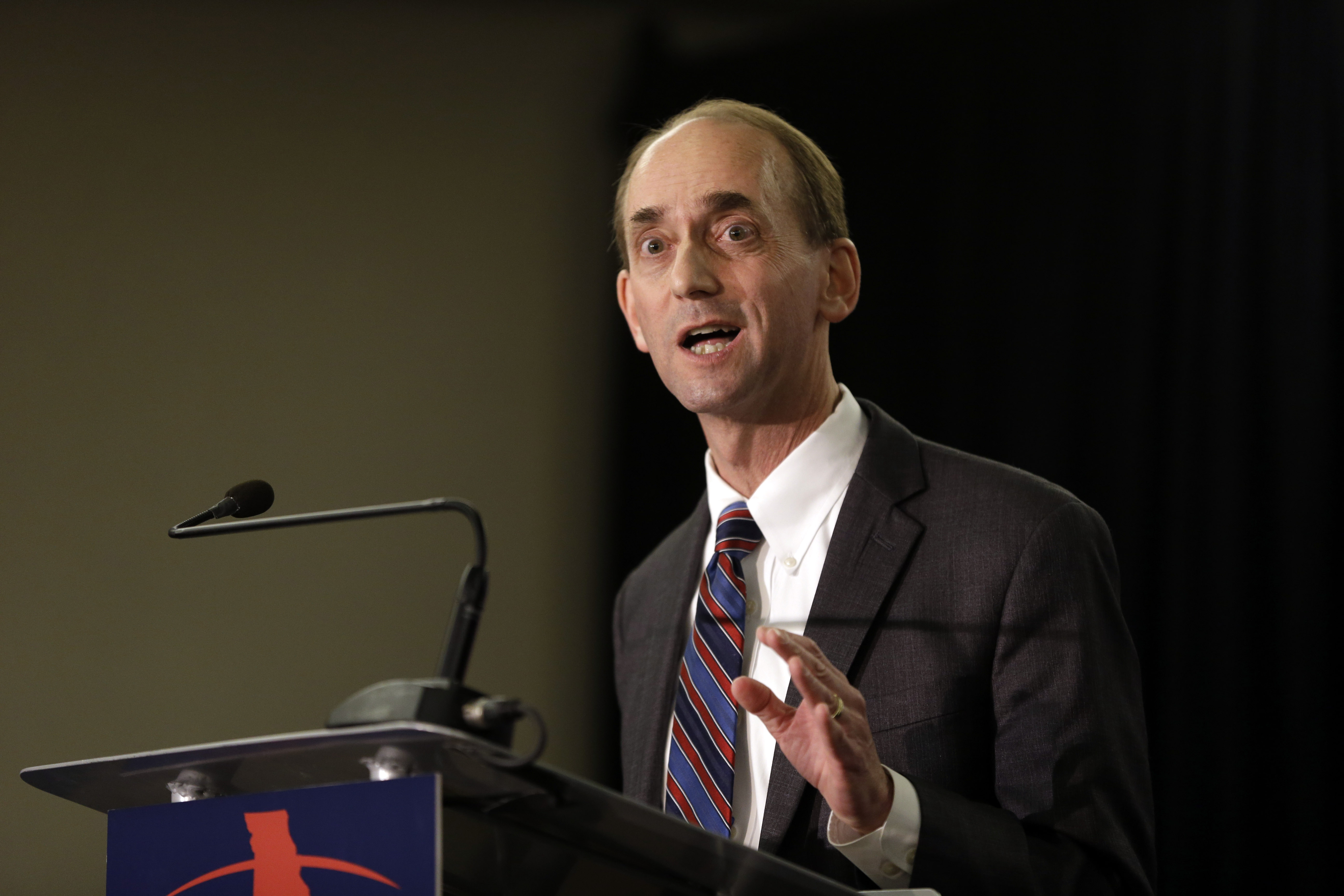 JEFFERSON CITY, Mo. - Missouri Auditor Tom Schweich, who had recently launched a Republican campaign for governor, fatally shot himself Thursday in what police described as an "apparent suicide," minutes after inviting reporters to his suburban St. Louis home for an interview.

Schweich's death stunned many of Missouri's top elected officials, who described him as a "brilliant" and "devoted" public servant with an "unblemished record" in office. Just 13 minutes before police got an emergency call from his home, Schweich had a phone conversation with The Associated Press about his plans to go public that afternoon with allegations that the head of the Missouri Republican Party had made anti-Semitic comments about him.

The state GOP chairman denied doing so in an interview later Thursday.

Schweich spokesman Spence Jackson said his boss had recently appeared upset about the comments people were supposedly making about his religious faith, as well as about a recent radio ad describing Schweich as "a weak candidate for governor" who "could be easily confused for the deputy sheriff of Mayberry" and could "be manipulated."

"The campaign had been difficult, as all campaigns are," Jackson said. "There were a lot of things that were on his mind."

But Jackson said Schweich had been diligently going about his work, with another audit scheduled to be released next week.

Clayton Police Chief Kevin Murphy said Schweich was pronounced dead at a hospital from a single gunshot after paramedics responded to the emergency call.

"Everything at this point does suggest that it is an apparent suicide," Murphy said, adding that an autopsy would be conducted Friday.

He said he did not know whether Schweich left a note.

Schweich was 54. He had been in office since January 2011 and had easily won election in November to a second, four-year term. He announced a month ago that he was seeking the Republican nomination for governor in 2016, and was gearing up for an expected primary fight against Catherine Hanaway, a former U.S. attorney and Missouri House speaker.

Naturally high-strung, Schweich seemed unusually agitated - his voice sometimes quivering and his legs and hands shaking - when he told an AP reporter on Monday that he wanted to hold a press conference to allege that Missouri Republican Party Chairman John Hancock had made anti-Semitic remarks about him.

Schweich said he is a Christian but has Jewish ancestry on his father's side of the family. He postponed a planned press conference Tuesday. But Schweich called the AP at 9:16 a.m. Thursday inviting an AP reporter to his home for a 2:30 p.m. interview and noting that a reporter from the St. Louis Post-Dispatch also had been invited. An AP reporter spoke with Schweich by phone again at 9:35 a.m. to confirm the upcoming interview.

Police say the emergency call to Schweich's house was received at 9:48 a.m.

In conversations with the AP, Schweich said he had heard that Hancock had been making phone calls last fall in which he mentioned in an off-handed way that Schweich was Jewish. Schweich said he felt the comments were anti-Semitic and wanted Hancock to resign the party chairmanship to which he had been elected last Saturday.

Hancock told the AP on Thursday that Schweich had talked to him about the alleged comments last November, but not since then. Hancock, who is a political consultant, said he had made phone calls last fall on behalf of a project to register Catholic voters. Hancock said that if he had mentioned that Schweich was Jewish, it would have been in the context that Hanaway was Catholic but that was no indication of how Catholics were likely to vote.

"I don't have a specific recollection of having said that, but it's plausible that I would have told somebody that Tom was Jewish because I thought he was, but I wouldn't have said it in a derogatory or demeaning fashion," Hancock said.

Hanaway said in a statement that she was "deeply saddened" by Schweich's death and described him as "an extraordinary man with an extraordinary record of service to our state and nation. "

"From his courageous work to combat the illegal drug trade abroad in Afghanistan to his tireless efforts to protect the interests of taxpayers here in Missouri, Tom Schweich's exceptional intellect and unwavering dedication to public service left a legacy that will endure for many years to come," read the statement.

Schweich made his political debut in 2009. He had initially considered running for the seat being vacated in 2010 by Republican U.S. Sen. Kit Bond, and he had the encouragement of his mentor, former U.S. Sen. John Danforth. But Schweich defered to Rep. Roy Blunt to avoid a divisive GOP Senate primary and instead challenged and defeated Democratic State Auditor Susan Montee in the 2010 election.

But he also emphasized charity, citing his Christian beliefs as a source of compassion and promising to cut back on government spending and misuse without hurting the poor.

"Part of being a Christian is you gotta help people," Schweich said while speaking to about a dozen members of the Missouri Republican Assembly on Saturday, his wife watching from the back of a small conference room in the Kansas City Marriott Downtown.

Later that day he scooped dollops of ice cream for supporters until his hands hurt.