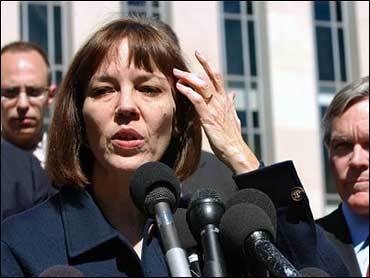 New York Times reporter Judith Miller testified before a grand jury Friday, ending her silence in the investigation into whether White House officials leaked the name of a covert CIA operative, Valerie Plame.

Miller, free after 85 days in jail, said she was

"happy to be free and finally able to talk to all of you." (video)

Escorted by her lawyers and New York Times Publisher Arthur O. Sulzberger Jr., Miller met with reporters for several minutes after spending more than four hours inside the courthouse, most of it behind closed doors with a grand jury.

Miller said she agreed to meet with the grand jury after hearing "directly from my source" by telephone and in a letter that she should cooperate with the investigation by Special Counsel Patrick Fitzgerald.

"I concluded from this that my source genuinely wanted me to testify," she told reporters.

"I served 85 days in jail because of my belief in the importance of upholding the confidential relationship journalists have with their sources," Miller said. "Believe me, I did not want to be in jail. But I would have stayed even longer."

Miller's testimony has been characterized by Fitzgerald as key to his investigation into the White House role in the disclosure of Plame's identity.

Although Miller declined to identify her source, The New York Times identified him as Lewis I. "Scooter" Libby, chief of staff to Vice President Dick Cheney.

But Libby's lawyer said Friday he and his client had released Miller long ago to testify, and were surprised when Miller's lawyers again asked for a release in the last few weeks.

"We had signed a waiver more than a year ago," Attorney Joseph Tate said. "We didn't think this had anything to do with Scooter. I was under the impression from talking to (Miller attorney Floyd) Abrams that she was protecting a number of other sources."

Tate said Miller's lawyers called recently and said there was "a misunderstanding and Judy wanted to hear it straight from the horse's mouth" that Libby was releasing her to talk to the grand jury about their conversation.

Tate said his client did not know or hear about Plame's identity until it appeared in a newspaper column by Robert Novak. "Scooter did not know the name until he saw it in the Novak article," he said.

Until a few months ago, the White House had maintained for nearly two years that Libby and presidential adviser Karl Rove had no role in leaking the identity of Plame, whose husband had publicly suggested that the Bush administration twisted intelligence in the runup to the war in Iraq.

On Friday, the White House again refused additional comment on Libby and Rove's involvement. Spokesman Scott McClellan said he won't comment on an "ongoing investigation." He again said the president wants the investigation to come to a "successful conclusion."

CBS News correspondent Peter Maer reports McClellan would not directly respond when asked if he felt "burned" because he previously told reporters "Those individuals (Libby and Rove) have assured me they were not involved in this."

The timing of the criticism by former Ambassador Joseph Wilson was devastating for the White House, which was already on the defensive because no weapons of mass destruction had been found in Iraq. The president's claims of such weapons were the main justification for going to war.

Time magazine reporter Matthew Cooper has testified recently that Rove and Libby had spoken to him about Wilson's wife that same week in July 2003 when Miller spoke to Libby.

Miller, released from jail Thursday night, had been in custody in Alexandria, Va., since July 6. A federal judge ordered her jailed for civil contempt of court when she refused to testify.

The disclosure of Plame's identity by syndicated columnist Robert Novak on July 14, 2003, triggered a criminal investigation that could still result in charges against government officials.

"My source has now voluntarily and personally released me from my promise of confidentiality regarding our conversations relating to the Wilson-Plame matter," Miller said in a statement Thursday. Her newspaper identified Libby as the source, saying that Miller and Libby spoke in person on July 8, 2003, then talked by phone later that week.

Times publisher Sulzberger said that "as we have throughout this ordeal, we continue to support Judy Miller in the decision she has made. We are very pleased that she has finally received a direct and uncoerced waiver, both by phone and in writing, releasing her from any claim of confidentiality and enabling her to testify."

White House aides signed waivers earlier in the probe, but Miller wanted personal assurances that her source's waiver was voluntary.