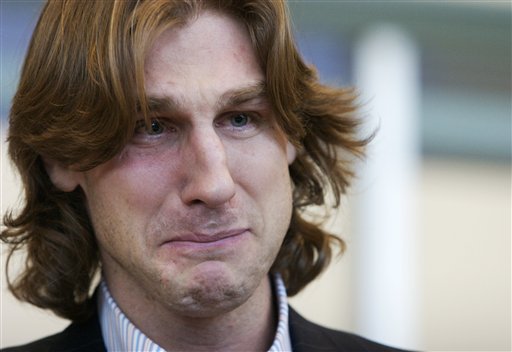 Now that the traded players are in place, NHL coaches must quickly make them fit.

Swaps for the playoff push are only as good as the wins they produce. After a furious day of wheeling and dealing Tuesday, the time has come to bring old and new players together into a cohesive mix for a run toward the Stanley Cup.

"What we were trying to identify was we needed a little bit more leadership in the room," San Jose Sharks coach Ron Wilson said after the acquisition of top forward Bill Guerin from St. Louis. "We actually don't have anybody on our team, outside of Billy now, who's played on a Stanley Cup champion."

Entering play Wednesday, only seven of the 30 NHL clubs were more than 10 points below the playoff cutoff. Some, such as Edmonton and Florida, fall into that range but used deadline day to work toward the future.

The rest hope to catch a spark in the final five weeks of the regular season.

"It sends a clear message to our players that we believe in our team," Wilson said. "We think that by adding Bill it makes us even stronger in our push to try and win a Stanley Cup this year."

Only defending champion Carolina, Montreal and Vancouver were inactive in the final six hours before the swapping stopped. Each made deals, however, in the days leading up to the deadline. There were a record-tying 25 trades Tuesday involving 44 players.

Edmonton created the biggest stir by sending favorite forward Ryan Smyth to the New York Islanders 20 minutes before the deadline. Smyth became the face of the franchise during his 11-plus seasons with the Oilers.

But his pending unrestricted free agency and the inability for the left winger and the team to reach a new contract in time forced general manager Kevin Lowe to move him.

Smyth had a tearful goodbye at the Edmonton airport before boarding a flight to Long Island on Wednesday. Dubbed "Captain Canada," the 31-year-old Smyth has gone from being the most-popular Canadian on a Canadian team to a newcomer in New York.

"Any time you're with one organization for as long as Ryan has, there's certainly going to be a little bit of sadness leaving an organization that he grew up with," coach Ted Nolan said. "To fly him overnight and get him down here and put a New York Islanders jersey on him, that's not going to make him an Islander right away.

"It's going to take some time to adjust, to adapt and all the things of a normal learning curve."

New York paid an expensive price to land Smyth, the Oilers' leading scorer who could walk away at season's end. But by giving up two prospects and this year's first-round draft choice, the deal brought in an impact player without causing a roster ripple.

"That's one of the things we looked at," Nolan said. "Usually you have to give up one or two players from your roster to make a trade. Sometimes that can have an effect in the dressing room. One thing I have to say about our team, we've got some real good character-type of guys.

"To make a move like this with no disruption in the room, I think that's as important as getting Ryan here."

The Islanders faced a similar dilemma as the Oilers. Top scorer Jason Blake was on the block because of his impending free-agent status and for recently going public with contract demands.

But New York held onto him, and Blake responded with a hat trick hours after the deadline in a 6-5 victory over Philadelphia. He has a career-high 32 goals and will be a key factor in determining whether the Islanders hang onto eighth place in the Eastern Conference and get into the playoffs after a one-year absence.

"It's been a tough week on him," Nolan said. "He just recently had a baby and is staying up all night. Once that 3 o'clock deadline was over, he knew he was here. His baby was safe and sound at home, he walked with a whole different step."

Once Islanders captain Alexei Yashin returns from a knee injury, Nolaplans to play him with Smyth and Blake.

Wilson already has line combinations figured out, too. Guerin will join the high-powered duo of Joe Thornton and Jonathan Cheechoo _ the guys who captured the scoring and goal titles last season after Thornton was acquired from Boston.

"I think there will be an instant chemistry because they have a past," Wilson said of former Bruins teammates Thornton and Guerin. "I think anybody can jump in and play with Joe. He's managed to make a lot of guys better.

"It should be a pretty smooth transition."