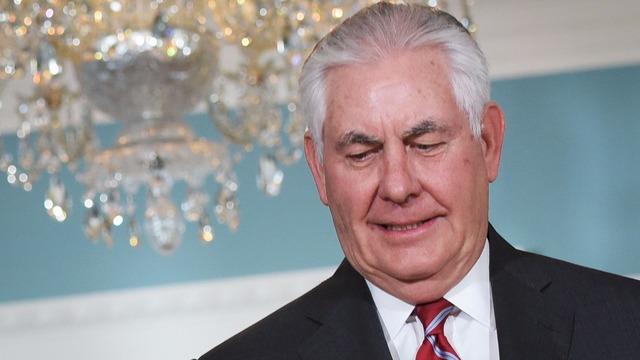 Secretary of State Rex Tillerson on Tuesday said Americans should be "sober" and "clear-eyed" about the situation in North Korea. Tillerson spoke alongside Canadian Foreign Minister Chrystia Freeland while the U.S. and Canada are hosting a summit in Vancouver with ally nations on how to handle the nuclear threat North Korea poses.

A reporter asked Tillerson whether the U.S. should be concerned about the possibility of war.

"I think we all need to be very sober and clear-eyed about the current situation, as North Korea has continued to make significant advances in both its nuclear weapons, the lethality of those weapons, as demonstrated by their last thermonuclear test, as well as the continued progress they've made in their intercontinental ballistic missile systems," Tillerson said. "We have to recognize that that threat is growing. And if North Korea does not choose the path of engagement, discussion, negotiation, then they themselves will trigger an option."

Tillerson declined to comment on a question of whether the U.S. is considering military strikes in North Korea.

The secretary of state also noted the world is at a "tenuous stage," considering how much North Korea's nuclear efforts have advanced recently. Tillerson said the U.S. and other nations are "resolute" that North Korea will never become a nuclear power.

At the summit, ally countries discussed the importance of stepping up efforts to intercept illegal smuggling to North Korea, and the value of fully implementing sanctions already in existence.

"We also issued a call to action to strengthen global maritime interdiction operations to foil illicit ship-to-ship transfers," Tillerson said. "In doing so, let me be clear. We do not seek to interfere with legitimate maritime activities."

President Trump has said he would be open to speaking with North Korean leader Kim Jong-un, even as South Korea has opened lines of communication with North Korea ahead of the Winter Olympics in South Korea next month. North Korea this week called Mr. Trump a "lunatic," as the U.S. sends B-52 bombers to Guam.

Canada's Freeland opened her remarks by saying Canada harbors no hostility towards North Korea or its people, still emphasizing the importance of addressing the North Korean threat. Freeland said the summit had addressed the importance of fully implementing sanctions already in existence.

"We seek neither regime change nor a collapse," she said.

Tillerson also addressed comments Mr. Trump made last week, when in a meeting on immigration with key congressional leaders, the president referred to African and other nations as "sh*thole countries." African ambassadors to the United Nations have called the president's comments "outrageous" and "racist."

"We have a very positive relationship with African nations," said Tillerson, who said the U.S. is generous in providing defense and other aid to that continent.