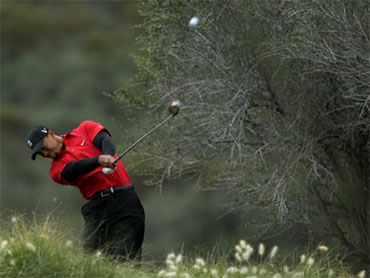 U.S. Open champion Graeme McDowell capped off his greatest year with two clutch putts that gave him the greatest comeback ever against Tiger Woods.

McDowell holed a 20-foot birdie putt on the final hole to force a playoff Sunday in the Chevron World Challenge, then made another birdie putt from a little longer away to deny Woods a victory in his final tournament of the year.

Woods, despite losing a four-shot lead, was poised to end a turbulent year with a victory in his final event of the year. Tied for the lead playing the 18th hole at Sherwood Country Club, he stuffed an 8-iron inside 3 feet for a sure birdie. It was vintage Woods, the kind of magic he has he delivered so often in his career.

But it wasn't the same old outcome.

McDowell, with his own reputation as a tough closer, stayed in the game on the 17th by taking a penalty drop on the 18th tee and escaping with bogey. Then after Woods' great shot, McDowell answered with an all-or-nothing birdie putt.

In the playoff on the same hole, McDowell coaxed in another birdie putt from about 25 feet. Woods had about 15 feet to extend the playoff, but it missed just right of the cup.

"Probably two of the great putts I've made," McDowell said.

But he three-putted twice for bogey early in his round, lost the lead with a double bogey on the par-5 13th, then rallied to give himself a chance to win when McDowell paid for a few bad shots.

Ultimately, it was great theater. And for the first time all year, it included Woods.

"He will be back to winning tournaments very soon," McDowell said.