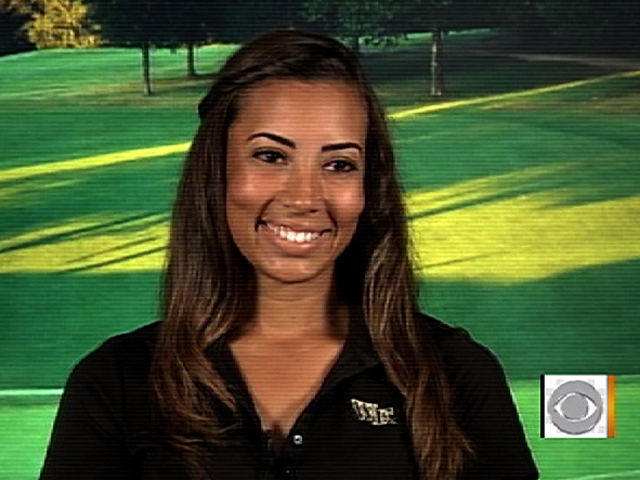 Tiger Woods may be having a tough year on the golf course, but at least there is one winner in the family. His niece, Cheyenne Woods, just won the Atlantic Coast Conference Women's Golf Championship in Greensboro, N.C.

On "The Early Show" Thursday from the Wake Forest University campus in Winston-Salem, N.C., Cheyenne Woods described her recent win as the biggest in her career.

"It was very exciting the whole weekend, being out there with my team and representing Wake Forest," said Cheyenne, who's a junior. "So it was a really good win for me."

Co-anchor Chris Wragge observed, "You've got this really smooth, effortless swing, where Uncle Tiger, he just fires at the ball. How is your game different than Tiger's?"

"Tiger is definitely a lot more powerful and aggressive, I think. I'm a lot more calm and steady throughout my whole round," she said. "But if I have to make those clutch shots, then I think I can. So I guess if I have to pull a little bit of Tiger Woods-type play out, I can."

But has her famous connection been an obstacle?

"A little bit," she said, "because I've had to deal with it since I was about 10 years old. But growing up, playing golf with the last name, I've gotten used to it. So now, it doesn't really faze me at all. I'm used to it and I can play my own game and not worry about the expectations or what people are saying."

Wragge said Tiger was on "The Merv Griffin Show" when he was 2 or 3 years old, swinging a golf club with his dad. When did Cheyenne realize she could play?

"Probably not until I was about 10 or 11 and I started playing national tournaments," she said. "And I won my very first national tournament when I was 10 years old. Then I knew I could compete with all these other people and, I guess, try to make my way to be like Tiger."

Following Cheyenne's win, Tiger Woods responded with a tweet to his fans.

"He just said that he was very proud of me, and told everybody that I had won by seven shots," Cheyenne said. "... And I was really surprised by that. And my whole team and I were looking on Twitter and really excited."

Cheyenne Woods said she'd love to have the success Tiger has enjoyed.

"Who wouldn't want to have the success of Tiger?" She added, "But I definitely can't compare myself to him, because he is a very elite athlete. And there's only one Tiger Woods. So, I'll just try and do my own thing, and try and succeed as much as I can, and play my own game."

Wragge said, "You know, you talk about there being only one Tiger Woods. That goes without saying. But you know, Tiger hasn't won in 17 months. And you've won two titles in that period of time. Who's giving who the advice now?"

Cheyenne Woods replied, "You know, when I was texting him, I tried to tell him, you know, I did win the ACC title. He didn't, and then I also told him that I am about to get my degree -- which he didn't. But then, you know, he came back at me and told me he still has four Masters. So in the end he, you know, trumps me in everything."