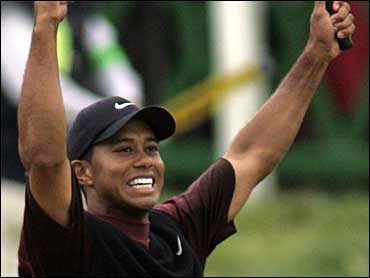 Sunday brought yet another grand crossing over the Swilcan Bridge. The defiant return of Tiger Woods.

Two days after Jack Nicklaus bade an emotional farewell to the majors, Woods took another step toward the Golden Bear's record with another ruthless performance at St. Andrews, closing with a 2-under 70 to win the British Open for his 10th career major.

He won by five shots, the largest margin in any major since Woods won by eight at St. Andrews five years ago. This one had a sense of inevitability, as Woods took the lead on the ninth hole of the first round, and no one caught him over the final 63.

He joined Nicklaus as the only players to win the career Grand Slam twice, and Woods' second major of the year restored a dominance that had been missing over the past couple of years.

Even after he won the Masters in a playoff, there were questions about whether Woods could blow away the competition the way he did five years ago, when he captured seven out of 11 majors.

But that's exactly what happened on the Old Course.

Woods was challenged briefly by Colin Montgomerie and his flag-waving gallery, but pulled away on the back nine with one perfect shot after another to finish at 14-under 274.

Montgomerie closed with a 72 to finish second at 279, his highest finish at a major since he was runner-up at the 1997 U.S Open at Congressional. Jose Maria Olazabal lost his way in gorse and pot bunkers and shot 74, making birdie on the last hole that gave him a tie for third at 280 with Fred Couples (68).

Woods didn't stop and pose atop the Swilcan Bridge as Nicklaus did on Friday. Instead, he walked swiftly over the stone arch, removed his cap as he walked up the 18th fairway and sent a powerful message to the world of golf: He's back.

Maybe those swing changes weren't such a bad idea.

"This is one of the reasons I made the changes," Woods said, "so I could be back here again and be at this level."

He held the silver claret jug aloft under the clouds that gathered over the gray old town. He and Nicklaus are the only Americans to win the Open twice at the home of golf, but that's not the record Woods wants.

Nicklaus won the 10th of his record 18 majors when he was 32, so Woods is ahead of pace in his pursuit of a standard that few expected ever would be touched.

"He knows as well as everyone else does that he's on his way to Jack Nicklaus' record of 18 and a record that we said would never ever come close, never mind be broken," Montgomerie said. "And he's over halfway now. Who knows? It will be very interesting over the next few years to see what happens."

The final round was hardly a nail-biter. Woods twice turned away threats by making two-putt birdies, then marched along as a strong cast of contenders, either major champions or players who have been ranked in the top 10, collapsed around him.

He played so well on another windswept afternoon along St. Andrews Bay that he was the only one to break par among the final 14 players.

After his Masters win in April, Woods' eyes welled with tears as he told reporters he missed having his ailing father with him on the course.

"I was surprised, yes ... because I never let my emotions get out of control," he told co-anchor Hannah Storm the next day. "You know, it felt different. It felt really different. I'm not normally like that, I don't cry. It kind of shocked me."

Woods last month was named second in this year's Forbes Celebrity 100 list of famous people who make the most money and attract the most attention.