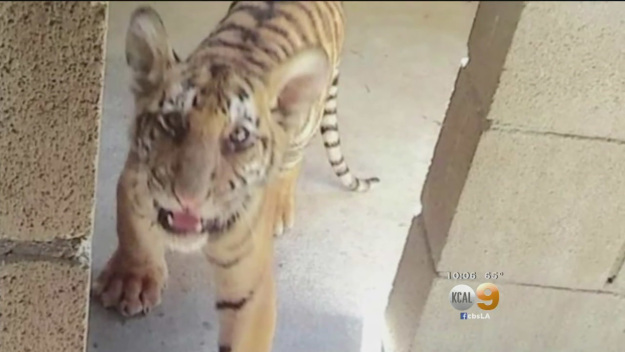 PHELAN, Calif. -- A three-month-old tiger cub was found roaming neighborhoods in the Inland Empire on Thursday and has been taken to an animal shelter, CBS Los Angeles reports.

The two-foot-long tiger was turned into the Ramona Humane Society in San Jacinto by a woman who found it in her neighborhood in Hemet. It was not immediately clear where the tiger had come from.

The group posted a clip of the cub, which could be seen roaming, and drinking water from a plastic bin.

The tiger was driven 70 miles to Phelan, where it's being held at Forever Wild Exotic Animal Sanctuary.

The animal sanctuary has several tigers, including a white tiger. According to the sanctuary owner, a person must have a special permit or license to own a tiger.

One social media user posted online: "Glad he will be properly taken care of," while another said: "Why is a tiger cub roaming around in the US? When are we going to outlaw these animals as pets?"

The owner of the sanctuary says the baby tiger is in good condition, but is a little feisty from all the attention. Thursday night, staffers planned on bottle feeding it and putting him to bed.