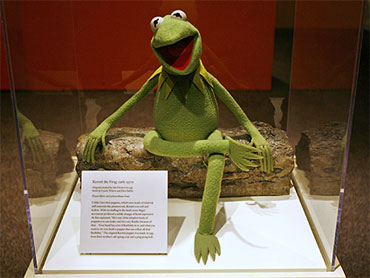 Michael Jackson's "Thriller" video, with that unforgettable graveyard dance, will rest among the nation's treasures in the world's largest archive of film, TV and sound recordings.

The 1983 music video directed by John Landis, though still the subject of lawsuits over profits, was one of 25 films to be inducted Wednesday for preservation in the 2009 National Film Registry of the Library of Congress.

It's the first music video named to the registry. It had been considered in past years, but following Jackson's death, the time was right, said Steve Leggett, coordinator of the National Film Preservation Board.

Joining the King of Pop in the 2009 class will be the Muppets from 1979's "The Muppet Movie" - the first time on the big screen for Kermit the Frog and Miss Piggy - and the 1957 sci-fi classic "The Incredible Shrinking Man," among other titles.

The library works with film archives and movie studios to ensure original copies are kept safe. It also acquires a copy for preservation in its own vaults among millions of other recordings at the Packard Campus of the National Audio-Visual Conservation Center in the hills near Culpeper, Va.

"By preserving the nation's films, we safeguard a significant element of our cultural patrimony and history," said Librarian of Congress James H. Billington.

Congress established the registry in 1989, which now totals 525 films. They are selected not as the "best" American films but instead for their enduring importance to U.S. culture.

The library selects films that are "culturally, historically or aesthetically" significant after reviewing hundreds of titles nominated by the public and consulting with the National Film Preservation Board.

In "The Muppet Movie," Kermit leads his fellow TV characters on a road trip to Hollywood where they meet Steve Martin, Mel Brooks and other actors with the magic of creators Jim Henson and Frank Oz.

Other notable titles include "Once Upon a Time in the West" (1968), directed by Sergio Leone, representing the "spaghetti western" genre that helped propel such rising stars as Clint Eastwood. The list also includes Bette Davis' Oscar-winning performance in "Jezebel" from 1938.

The oldest film inducted was "Little Nemo" from 1911, a mix of live action and animation adapted from Winsor McCay's comic strip "Little Nemo in Slumberland." The film, highly advanced for its time, influenced future animators, including Walt Disney.

Regardless of ongoing legal disputes over rights to Jackson's "Thriller," the library holds a copy submitted in 1984 for copyright purposes and will seek to acquire another for preservation.