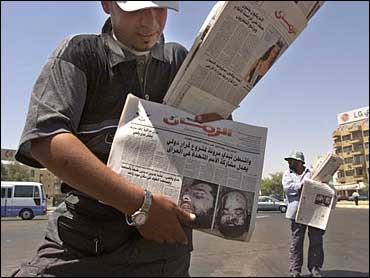 In Mosul, engineers with the 101st Airborne Division tore down the badly damaged villa where Odai and Qusai Hussein were killed Tuesday in a four-hour gun battle with U.S. forces.

The home belonged to Sheik Nawaf al-Zaydan Muhhamad, a regional tribal leader and Saddam cousin who neighbors said tipped American troops that the Hussein brothers were at his house.

The U.S. occupation administration had offered $15 million each for information leading to Saddam's wanted sons and $25 million for Saddam. It was believed, although not confirmed by occupation military commanders, that Muhhamad was in protective custody.

State Department spokesman Richard Boucher said an investigation was under way with military officials in Iraq to determine who gets the reward money. The State Department said the money could be issued within the next few weeks.

The U.S. military said more Iraqi informants have been coming forward with tips since the killings of Odai and Qusai. And with the arrest Friday of some of Saddam's bodyguards in Tikrit, his hometown and power base, American forces say they are closing in on the deposed dictator.

The soldiers killed Saturday were part of the 4th Infantry Division, which came under grenade attack in Baqouba, 45 miles northeast of Baghdad. Witnesses told an Associated Press photographer that the soldiers were guarding the hospital because some of their wounded comrades were being treated there.