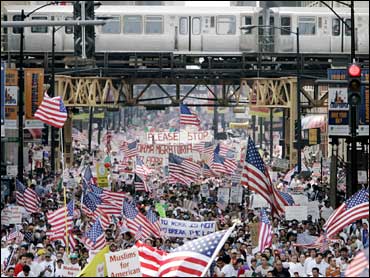 Angry over recent raids and frustrated with the U.S. Congress, thousands of people protested across the United States on Tuesday to demand a path to citizenship for an estimated 12 million illegal immigrants.

Ten thousand rallied in Los Angeles; in Chicago, 150,000 turned out. In Orlando, Denver, Houston and dozens of cities across the country, tens of thousands of demonstrators took to the streets, like last year, reports CBS News correspondent Bill Whitaker.

Organizers say immigrants feel a sense of urgency to keep immigration reform from getting pushed to the back burner by the 2008 presidential elections.

Though this year's turnout was lower, organizers say immigrants feel a sense of urgency to keep immigration reform from getting pushed to the back burner by the 2008 presidential elections.

"If we don't act, then both the Democratic and Republican parties can go back to their comfort zones and do nothing," said Angelica Salas, director of the Coalition for Humane Immigrant Rights of Los Angeles. "They won't have the courage to resolve a major situation for millions of people."

It's at the top of President Bush's domestic agenda again this year: tougher border security, a guest-worker program, and a pathway to citizenship for the millions here illegally already, adds Whitaker.

But the chance of real immigration reform seems slim again this year. So marchers plan to keep up the pressure to change the laws and stop deportations, which they say are destroying families.

In Chicago, thousands of demonstrators carried American flags, signs and placards, including one that read, "We may not have it all together, but together we can have it all."

Melissa Woo, a 22-year-old American citizen who immigrated from South Korea, carried a Korean flag over her shoulder as she criticized politicians for "buckling at the knees."

"Us immigrants aren't pieces of trash, we're human beings," she said. "To be treated as less than human is a travesty."

Thomas Rodriguez, stood in Union Park wearing a shirt that said: "We are hard workers. We're not criminals."

The 38-year-old has had no legal status since he came to the United States from Mexico in 1989 and is an employee at a Japanese restaurant in Chicago.

"Recent raids have worried me," he said. "We worry deportations are leaving too many young people without parents."

In southwest Detroit, hundreds of people wore red and white and carried American flags to a rally.

"Most of the undocumented people come here as a necessity of survival," said Rosendo Delgado, of Latinos United, one of the groups organizing the march. "For them, it's the only choice."

A mariachi band played in Phoenix as marchers walked from the fairgrounds toward the state Capitol.

"We want just reform," said Mayela Ruiz, another illegal immigrant. "I've been here 15 years. I've worked hard, paid my taxes. I've had no problems with the law and I'm afraid to leave my house. I want a law that would allow me to work and live in freedom but not like a slave."

A few dozen counter-protesters across the street from the Capitol got in a shouting match with some at the rally.

"I want to send them back," said Phoenix resident George Propheter, who held up a large handwritten sign that read "Hell No." "I've been in the city for 40 years. They've completely destroyed our city."

No rallies were planned in Atlanta, where 50,000 marched last year, because many immigrants were afraid of the raids and of a new state law set to take effect in July. The law requires verification that adults seeking non-emergency state-administered benefits are in the country legally, sanctions employers who knowingly hire illegal immigrants, and requires police to check the immigration status of people they arrest.

"There's a lot of anxiety and fear in the immigrant community," said Jerry Gonzalez of the Georgia Association of Latino Elected Officials.

In Oakland, Calif., about 2,000 people marched to City Hall.

"Nothing has happened since last year," said Gloria Ramos, 51, a social worker at a children's nonprofit who left her native Mexico for Oakland 32 years ago. "Things are getting worse for our people — more discrimination, less benefits."

In Los Angeles County, home to about 1 million illegal immigrants, by far the largest concentration in America, marches were set to include demands for a legalization program, a stop to the raids and an anti-Iraq war message. City and transportation officials were planning for as many as 500,000 people in downtown Los Angeles, believing it could be the largest in the city so far this year.

Los Angeles public school teacher David Cid said he came to support his students, many of whom are suffering because of recent raids that have impacted their families.

"They feel terrorized," he said.

Despite divisions over tactics and other issues, immigration groups and supporters said the diverse events will show the movement is stronger than ever.

"Just because the 12 million people who don't have legal residency don't attend a march doesn't mean they don't want it," said Eduardo "Piolin" Sotelo, a popular Spanish-language disc jockey. "I tell my listeners that no matter what they do, just don't stop doing something."

This year, about 400 members of Asian groups from across the United States are set to make a lobbying push with lawmakers in Washington.

Organizers said Tuesday's turnout will be lower than the 1 million who took to the streets last year. Stepped-up raids in recent months have left many immigrants afraid to speak out in public, a major change over rallies in 2006 when some illegal immigrants wore T-shirts saying "I'm illegal. So what?"

"These raids have torn apart families," said John Crockford, a member of the Central California Coalition for Immigrant Rights.

In Fresno, Calif., organizers planned a rally focusing on children whose parents had been deported. The San Joaquin Valley is home to thousands of seasonal workers who work illegally each year in the fields and construction industry.