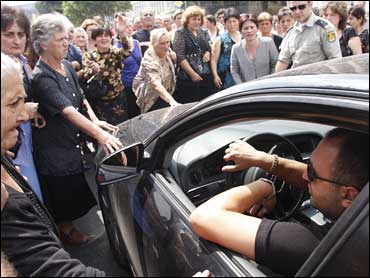 They described being shelled and shot at and forced to run for their lives - leaving homes, family members and most of what they had behind.

Hundreds of refugees from the fighting in the Georgian breakaway region of South Ossetia sought shelter in Russia on Sunday. They are among thousands who fled the region, and in particular the capital city of Tskhinvali, in recent days as Georgian forces battled for control.

They talked of hiking for hours to escape the fighting, hiding in the woods, being mocked by Georgian soldiers and passing the dead on the roadside.

Marina Dudayeva, a woman in her early 20s, fled from Tskhinvali wearing only her bed clothes and a pair of plastic slippers. On Sunday she found herself at a leafy, run-down summer camp near Alagir in the Russian region of North Ossetia, just across the border from South Ossetia. The residents of both regions are ethnic Ossetians, and have close family and cultural ties.

Dudayeva said she doesn't know what happened to relatives she left behind, including her 19-year-old brother.

"We can't contact them," she said, standing with her arms folded across her chest.

Many who fled still appeared to be in shock.

"The Georgians burned all of our homes," said one elderly woman, as she sat on a bench under a tree with three other white-haired survivors of the fighting.

She seemed confused by the conflict. "The Georgians say it is their land," she said. "Where is our land, then? We don't know."

Before the woman could give her name, police at the camp interrupted the interview. Two foreign reporters were later fined for working without special permission in a restricted border zone.

Russian authorities have detained and questioned a number of journalists working in the region. They have focused on those working for the Western news media - an apparent sign of rising tensions over the conflict in South Ossetia, a region that broke away from Georgian rule in the early 1990s and developed close ties to Russia.

Hundreds of other refugees gathered Sunday at a central square in Vladikavkaz, the North Ossetian capital, waiting to be sent to Anapa, a resort city on the Black Sea.

Zema Kulumbegova, a 43-year-old part-time English teacher, said when the shooting started last week, she, her husband and two children took shelter in the wine cellar of their two-story home in Tskhinvali.

At first, the skirmishes lasted a few hours and the Kulumbegov family would venture out. But by early Friday morning, the fighting became intense.

Kulumbegova said a rocket hit their neighbor's house and started a fire. "It's amazing that we weren't all killed," she said.

Her husband, a teacher and craftsman, refused to leave. So did her 90-year-old father, who said he wanted to spend the last days of his life at home.

So she gathered her three girls - Ina, 14, Lina, 12, and Marina, 11 - and called a relative to pick them up in his car. They spent the day in a nearby village, watching the fighting grow closer with friends and family. Finally, she said, Georgian tanks started firing into nearby houses.

Those huddled in the house climbed into two cars and started off along a road through a stretch of woods. As they passed through the forest, they came under fire.

Kulumbegova said she and her daughters ran among the trees and lay on the ground until the firing stopped.

When they returned to the road, they found their vehicles crippled. So she and her girls hiked up the road to the next settlement.

At one point, she said, they ran from the sound of gunfire and a group of Georgian soldiers laughed at them.

At last they reached a village where buses were waiting to take refugees north across the steep Caucasus Mountains and into Russia.

They arrived in Vladikavkaz on Friday, and at first moved in with a distant relative. But there were five other refugees already living in the apartment, a total of 12 people in four small rooms.

Kulumbegova said her father survived, but like many other South Ossetians has become embittered toward the Georgians.

"He always talked of the Georgians as 'our brothers,"' she said. "But now he doesn't say that any more."

Many Ossetians say they believe the United States supported Georgia's use of military force to try to restore Georgian rule in South Ossetia.

Following the Georgian assault on Tskhinvali, Kulumbegova said she expects many South Ossetians who once might have agreed to reunification with Georgia to oppose the idea. More, she predicted, will support unification with Russia.

"If you beat a dog, it will run away," she said, bitterly. "If we become part of Russia, I think that the way we live will in many ways be better than it is now."