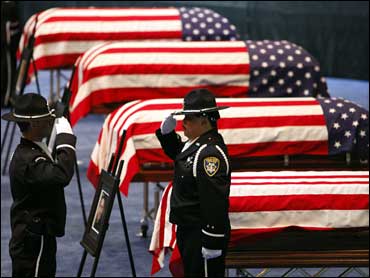 Thousands of mourners gathered with the families of four slain Oakland police officers for a joint funeral Friday that drew law enforcement officers from around the world.

Officers Mark Dunakin, John Hege, Ervin Romans and Daniel Sakai were remembered for their dedication to their families, friends and a gritty job they loved despite the dangers.

Police said Hege and Dunakin were gunned down March 21 when the two motorcycle officers pulled over a 26-year-old parolee during a traffic stop. Romans, Sakai and the parolee died later in a shootout when the city's SWAT team stormed an apartment where the man was hiding.

The violent confrontation was the biggest single day, gun-related loss of life for law enforcement since four federal agents died 16 years ago during a raid on the Branch Davidian cult in Waco, Texas.

The officers' caskets were draped in American flags and shepherded to the Oracle Arena that passed under a giant U.S. flag held up by two fire truck ladders as they entered the parking lot. Among those speaking at the service Friday were Gov. Arnold Schwarzenegger, U.S. Sens. Dianne Feinstein and Barbara Boxer, and state Attorney General Jerry Brown, a former Oakland mayor.

A spokesman for Oakland Mayor Ron Dellums said the mayor was attending the service, but was asked not to speak by at least one family of the victims. Paul Rose said he did not know which family made the request or the reason.

Acting Oakland Police Chief Howard Jordan said at the start of the service that the officers were "our brothers."

"They rest in peace, because they were men of peace," he said.

President Barack Obama and first lady Michelle Obama thanked the officers in a letter read by Oakland police chaplain Jayson Landeza, saying: "Our nation is grateful for the men and women who work in law enforcement. Their commitment to their fellow man will never be forgotten."

New York City Police Lt. Tommy Ng, who attended the ceremony, said the tragedy brought back memories of Sept. 11. He said he was not surprised by the outpouring of support for his colleagues in Oakland.

"When one of us is hurt, all of us are hurt," Ng said before the service. "We're all brothers."

Minneapolis Police Sgt. Steve Blackwell said he and three other officers drove from Minnesota to the service in Oakland, even though they didn't know the slain policemen.

"It's a national tragedy, so it cuts pretty deep," Blackwell said. "We want to let the people of Oakland see that we care. I hope that this city finds strength from this tragedy to move ahead."

Oakland streets were being patrolled by other law enforcement agencies to allow the city's officers to attend funeral services, reports CBS Station KPIX. All 815 members of the Oakland department have been given permission to go to the ceremony.

Oakland police officer John Wilson, a 25-year veteran of the force, said he knew the four slain officers and promised that their memories would live on.

"They made the ultimate sacrifice," Wilson said. "They will never be forgotten."