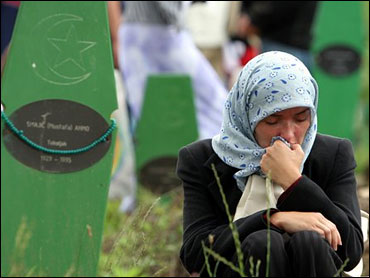 World leaders joined 50,000 people Monday to remember the victims of Europe's worst massacre since World War II — the death of nearly 8,000 Muslims 10 years ago when Serbs overran the U.N.-protected enclave of Srebrenica.

The sound of Muslim prayer echoed through a loudspeaker as relatives wandered among 610 caskets containing newly identified remains. The remains were buried alongside other victims in the cemetery that is part of the Memorial Center in Srebrenica.

Fatima Budic huddled over the coffin of her son, alone in her grief.

"They killed my entire life and the only thing I want now is to see the guilty ones pay for it," sobbed Budic, next to the coffin of her 14-year-old son, Velija. Budic's husband and Velija's 16-year-old brother have never been found.

Government leaders and dignitaries were among the crowd gathered to commemorate the 10th anniversary of the killings that began July 11, 2005, when Bosnian Serb soldiers overran Srebrenica — a U.N. "safe zone." Outmanned and outgunned Dutch U.N. troops watched. The males were led off and slaughtered, and their bodies dumped in mass graves throughout eastern Bosnia.

Forensics experts have exhumed more than 5,000 bodies, and identified 2,032 through DNA analysis and other techniques. More than 1,300 Srebrenica victims are already buried at the cemetery that is part of the memorial center. In all, nearly 8,000 were killed.

While the slaughter spurred the NATO bombings of Serb positions across Bosnia that forced the Serbs to seek peace, government leaders and their representatives on Monday acknowledged the world's failure to stop the killing — and expressed regrets in deeply personal terms.

"It is to the shame of the international community that this evil took place under our noses and we did nothing," said British Foreign Secretary Jack Straw. "I bitterly regret this and I'm deeply sorry for it."

British Prime Minister Tony Blair expressed "solidarity" with the relatives in a message read out at the ceremonies and drew parallels between the ethnic intolerance that spurred the Bosnian war and the terrorist bombings in London on Thursday.

"The bombers seek to provoke hatred between religions and cultures," he said. "It is our duty to humanity to ensure they never succeed."

Paddy Ashdown, Bosnia's international administrator, described Srebrenica as the "worst crime to take place in Europe in the latter part of the 20th century" — and the international community's failure to stop as "our greatest shame."

He and other officials viewed a nearby mass grave containing the jumbled bones of some 30 victims.

Outside, families of the dead hoisted a huge banner that read: "Europe's shame — genocide."

The Srebrenica victims were among some 250,000 people killed in the 1992-95 war among Bosnian Muslims, Catholic Croats and Orthodox Serbs. About 16,500 bodies have been exhumed from more than 300 mass graves.

The alleged masterminds of the July 11, 1995, massacre — Bosnian Serb wartime leader Radovan Karadzic and his military commander, Gen. Ratko Mladic — have been indicted by the U.N. tribunal in The Hague, Netherlands, for genocide and crimes against humanity. Both are still at large.

Serbian President Boris Tadic attended the service — a significant gesture given Serbia's backing of the Bosnian Serbs during the war under former Yugoslav President Slobodan Milosevic.

Ahead of Monday's ceremony, Tadic said he would come to "pay tribute to the innocent victims of the crime committed there."

"It is necessary to establish full trust and cooperation in the region," he said. "We have to break the circle of evil on the Balkans."