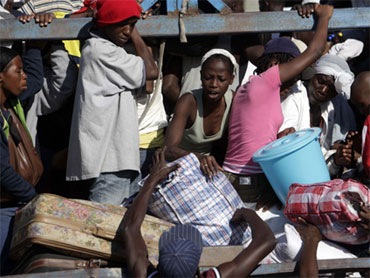 Thousands of Haiti quake victims are struggling to board buses to flee hunger and violence in the shattered capital, hoping that food will be easier to find in the countryside.

But both gasoline and food are scarce in Port-au-Prince, and bus drivers have hiked fares, forcing some to pay more than three days' wages for a seat.

"Thousands and thousands are leaving, I've never seen such a rush, even at Christmas," said driver Garette Saint-Julien, who was trying to manage the crowd Monday in front of his bus at the Portail Leogane, a suburb where buses gather for trips to Haiti's southern peninsula.

"Early Show" co-anchor Harry Smith reports from downtown Port-au-Prince that some people are still heading in to the capital city - but only in small numbers and primarily to loot any merchandise they can get their hands on and then leave again.

On the edges of the capital, Smith reports, many survivors have set up sprawling shantytowns, even opening restaurant stalls and de-facto shops. In these areas, for those who chose not to seek refuge in the countryside, life is going on relatively peacefully.

Most of those fleeing said they were heading to small farms run by their relatives, pressed on by the specter of starvation because foreign aid has failed to reach much of the population.

"We've got no more food and no more house, so leaving is the only thing to do," said Livena Livel, a 22-year-old street vendor who was traveling to her father's house near the town of Les Cayes four hours south of Port-au-Prince.

"At least over there we can farm for food," she said, carrying her 1-year-old daughter, Othmeline.

Livel and the six relatives leaving with her said they'd scraped together the last of their money to pay for the trip.

"It's become insanely expensive," she shouted amid the animated crowd, saying the one-way fare had nearly doubled to the equivalent of US$7.70 - more than three days' income for most Haitians.

Saint-Julien, the driver of a bus he'd named "Saint Yves" in bright, painted lettering, said he had no choice but to jack up his prices.

"It's not my fault, gas has doubled" because of shortages, said Saint-Julien, who is now paying US$50 to fill his tank.

"I can't continue sleeping outside with the children," said Rose-Marie Dedieu, 20, a mother of three who was holding an infant in her arms. She couldn't remember exactly when the baby was born. "But it was a day or two before the earthquake" last Tuesday, she said.

Most people said they hope they'll return to Port-au-Prince, a rundown city packed with slums and shanties where life already was exceedingly difficult for most people before the quake. Some officials estimate 200,000 people perished and 1.5 million are homeless.

Some Haitians sent only their children to the countryside while they stay behind to try to resume their jobs and find decent housing.

Fearing an outbreak of disease or violence, Charlemagne Ulrick had put his three children ages 4 to 11 on an overloaded truck for an all-day journey to Mole Saint Nicolas, at the far tip of Haiti's northwestern peninsula.

"They have to go and save themselves," said Ulrick, a dentist. "I don't know when they're coming back."