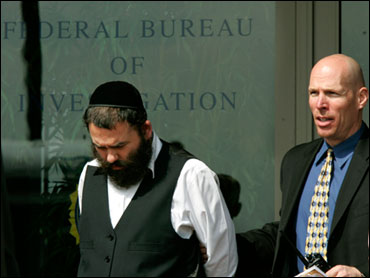 (AP Photo/Mel Evans)
An unidentified man is walked to a waiting bus after being taken into custody Thursday, July 23, 2009, in Newark, N.J., outside FBI offices.

All five rabbis have been charged with money laundering of proceeds derived from criminal activity, with synagogues allegedly "cleaning up" dirty money in exchange for fees. The rabbis' case is connected to the allegedly corrupt politicians because both sets of cases relied, in part, on the same secret informant, according to investigators.

Investigators are currently searching for cash and other evidence at approximately 20 locations in New York and New Jersey, according to a Department of Justice press release. The document also says federal investigators are in the process of seizing 28 bank accounts controlled by the money laundering defendants.

The money laundering operation involved high-ranking religious figures who sometimes, but not always, worked together, to wash millions of dollars of ill gotten funds, according to the Department of Justice. Participating rabbis could take as much as a 10 percent fee for using charitable, tax exempt organizations associated with themselves or their synagogues as pass-throughs. Dirty money would go in. Clean cash would come out, and the rabbis would take their cut, according to the DOJ's press release.

In one case, investigators say Eliahu Ben Haim, the principal rabbi of Congregation Ohel Yaacob in Deal, N.J., received checks ranging from tens of thousands to $160,000. In order to handle the heavy flow of money, prosecutors say Haim farmed out the money laundering to a network of rabbis in New York and New Jersey, who would also use accounts associated with their synagogues to disguise the transactions. 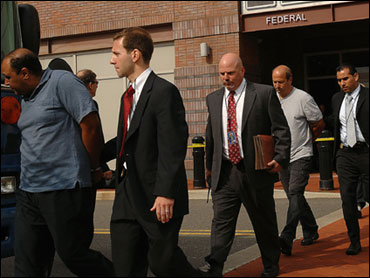 The political corruption cases focus on a group of N.J. politicians, who allegedly took bribes and campaign contributions in exchange for promised favors.

The DOJ press release outlines a who's who of alleged N.J. payola.

• Peter Cammarano III, the newly elected mayor of Hoboken and an attorney, charged with accepting $25,000 in cash bribes.

• L. Harvey Smith, a New Jersey Assemblyman and recent mayoral candidate in Jersey City, charged along with an aide of taking $15,000 in bribes to help get approvals from high-level state agency officials for building projects.

• Anthony Suarez, mayor of Ridgefield and an attorney, charged with agreeing to accept a $10,000 corrupt cash payment for his legal defense fund.

• Louis Manzo, the recent unsuccessful challenger in the Jersey City mayoral election and former state Assemblyman, and his brother and political advisor Robert Manzo, both with taking $27,500 in corrupt cash payments for use in Louis Manzo's campaign.

• Leona Beldini, the Jersey City deputy mayor and a campaign treasurer, charged with taking $20,000 in conduit campaign contributions and other self-dealing in her official capacity.

Defendants in both the political corruption and money laundering investigations are scheduled to begin making appearances in a federal court in Newark Thursday afternoon.