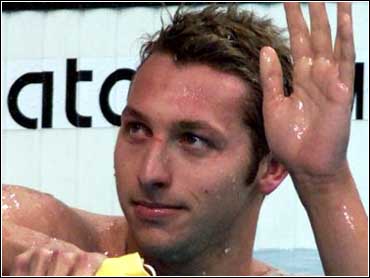 Australian Ian Thorpe, the swimming star of the Sydney Olympics, won the most anticipated race of this year's sessions in the pool. He won the gold medal in the men's 200-meter freestyle race in Olympic-record time.

The bronze medal is the third medal of the games for Phelps, but it means he will not tie Mark Spitz' record of seven gold medals in a single Olympics.

Phelps, a gangly 19-year-old from Baltimore with the longest-ever swimmer's arms to reach for the gold, has one gold medal and a world record already as well as a bronze with the relay team.

Australia's Thorpe took Sydney by storm four years ago and has gold and bronze, too. In the semis, Phelps came in second to Thorpe.

The Early Show national correspondent Thalia Assuras talked to some fans before the race.

Joannie Bronander said, "Michael Phelps is gonna win because he's from the United States and we're going for the gold."

But another swim fan said, "Phelps is a good swimmer, but I don't think he's got it on Thorpe."

Phelps said earlier, "As a team, we're here to do a job and the job is to get in the water and swim as fast as we can."

Thorpe added, "He's an exceptional athlete and I think he'll have a very successful Olympic games."

Still, this is the Olympics, after all, and the spirit of sportsmanship reigns over all.

So far, in two days of competition, Americans are tied for the medal lead with China and Australia. All have eight. But the U.S. has just that one gold medal, won by Phelps.

Another big event Monday night is the finals in men's gymnastics. The U.S. could take the team gold for the first time since the boycotted games in 1984. But the U.S. men are currently second, behind Japan. The women compete Wednesday.

As for the reaction to the U.S. basketball stunner, many in Greece were rooting for Puerto Rico, not because they were anti-U.S., but as a small country, they love the underdog. The next game for the U.S. men's team is Wednesday night, against Greece.

The hottest tickets are all the swimming and beach volleyball events. On Sunday, there was a sea of empty seats. In fact, ticket sales for these entire Olympics are disappointing.

As for the weather, a couple of days ago it was the heat that was hurting the cyclists. Now it is the wind, with gusts of more than 35 miles an hour, causing the postponement of the rowing competition.