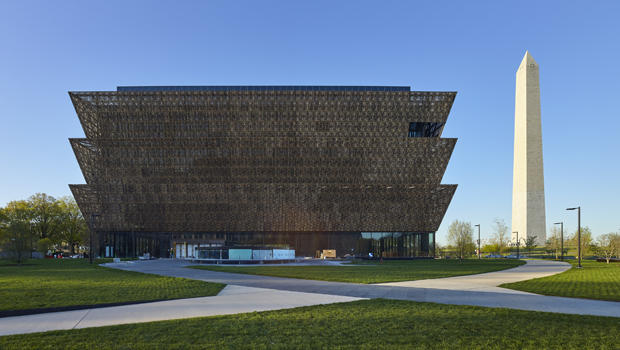 COVER STORY: A dream come true | Watch Video
After years of planning and construction, the new Smithsonian National Museum of African American History and Culture will soon open its doors in Washington, D.C. The tales recounted in its massive collection of artifacts of African-Americans’ experience over the last four centuries reflects a “belief in an America that often didn’t believe in them.”

Music legend Quincy Jones, who sits on the board of directors, gives Lee Cowan a sneak preview of the astonishing collection.

ALMANAC: Henry Hudson | Watch Video
On September 11, 1609, the English explorer’s ship anchored in New York harbor, near the mouth of the river that now bears his name. Charles Osgood reports.

AUTOMOBILES: Italian beauties on four wheels | Watch Video
Anthony Mason shows us some of the most exotic cars ever designed.

MUSIC: Demi Lovato: Fighting back | Watch Video
After beating addiction and other demons, the singer (who tells Tracy Smith she “kind of made a pact with God”) is raising her voice to speak out about mental illness.

PASSAGE: A World War II icon (Video)​
It happened this past week: the death of Greta Zimmer Friedman, who claimed to be the young woman captured in the famous Alfred Eisenstaedt photo, published in Life Magazine, of a sailor and a nurse kissing in Times Square to celebrate the end of World War II. Charles Osgood reports.

STEVE HARTMAN: Man and goose forge unusual friendship (Video)​
A lifesaving act on an Oregon lake has led to an unlikely connection between a goose and her hero. Steve Hartman goes “On The Road” to meet the inseparable pair.

TV: Wendy Williams: Talk of the town (Video)​
Wendy Williams started out in radio, building the foundation of her brand in New York’s hip hop industry. Known for getting the goods on the who’s-who in the Big Apple’s celeb circles, Williams took her career to a new level when she launched a daily talk show. She tells “Sunday Morning”’s Michelle Miller how she became a media mogul all while being a mom and wife.

REMEMBRANCE: 9/11: Sorrow and healing coexist at ground zero site​ | Watch Video​
In memorials and witness’ testimony, life and death share in the rebirth of the World Trade Center, 15 years after the 2001 terror attacks.

Martha Teichner, who reported from ground zero in the days that followed, returns to tell the story of those who died, the memorial erected in their honor, and the people who made it happen.

GALLERY: Images from “One World Trade Center: Biography of a Building”​

ELECTION 2016: What do Trump supporters see in their candidate?​ | Watch Video​
The polls are tightening for Donald Trump and Hillary Clinton in their race for the White House.  While many political pundits and party leaders have written off Trump’s chances from the beginning, and despite the controversies that continue to swirl around the real estate tycoon and reality TV star-turned-politician, his campaign continues to show remarkable resilience. CBS White House correspondent Major Garrett talks with some of Trump’s supporters, to ask why their faith in the political neophyte is unshakable.

CALENDAR: Week of September 12​ | Watch Video​
“Sunday Morning” takes a look at some notable events of the week ahead.

NATURE: Vortex Spring (Extended Video)​
We leave you this Sunday below the surface of Vortex Spring in Florida ... a home to fish and the occasional eel. Videography: Tom Cosgrove