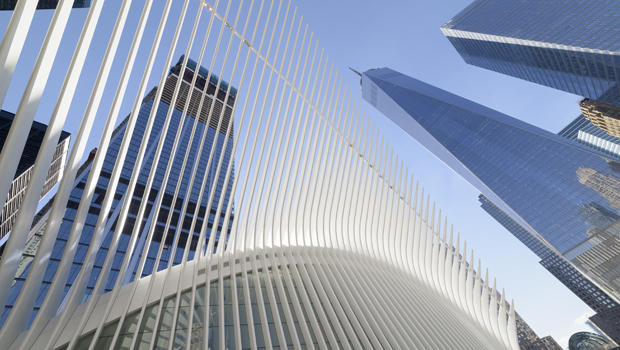 Today, of course, is a day of remembrance for the 9/11 attacks on America. Fifteen years later, the wreckage of the Twin Towers has long since been cleared, and a new tower has risen in their place. Even so, sorrow and healing share the site in equal measure. With Martha Teichner, now, we pay our respects:

Are the cascades of water at the site of ground zero the tears of a nation weeping, or a soothing rain forever trying to wash away the horror of what happened here?

This is where the Twin Towers stood. Looking down, you cannot see the bottom ...

And you cannot come here and forget for a moment that achingly perfect blue-sky morning -- September 11, 2001, when the planes hit … when the towers fell ... when nearly three thousand people died on this spot.  It is hallowed ground.

“This project is as much a part of 9/11 as the falling towers were,” she said. “It’s all on a continuum. Life is for the living.  People need to live.  It’s a way of honoring the dead.”

Since this memorial opened in 2011, more than 28 million people have gazed at the names of the 9/11 dead -- those killed at the World Trade Center, and also the 40 who died at Shanksville, Pa., and 184 others at the Pentagon.

Lee Ielpi’s son, Jonathan, was 29 -- a fireman killed in the South Tower. Lee says having his son’s name here means “hopefully, they’re not gonna forget him.”

He recalled how he brought the first lady of Japan to the site, where she performed a ritual with the water. “I didn’t realize -- huh, it’s like holy water,” he told Teichner.

Ielpi was one of the so-called “band of dads” -- retired firefighters who raced to the Trade Center site to help and then spent months digging through the rubble for the bodies of their sons. Of them all, only his son was found.

Fifteen years on, Ielpi is still here, an advocate for Sept. 11th families and co-founder of the 9/11 Tribute Center, where his son’s coat and helmet are now on display.

“9/11 is a day that thousands of people were murdered. Jonathan and my buddies were doin’ what they loved to do. The birthday and my son’s gear … difficult.”

On May 30, 2002, nine months after the World Trade Center attacks, the site had been cleared except for one nearly-60-ton beam, by then covered with the names and photos and jottings of the people who had done the clearing. And just as it had each time human remains were found, activity at ground zero stopped when that last column was removed and reverently borne away.

But twelve years later, when the 9/11 Memorial Museum opened in 2014, there it was, the beam -- the building built around it.

When you go there, it all comes back … the feeling you had that day if you lived in New York City … a sickness, almost.

You’re haunted again by the faces of the lost … all the smiling people whose stories have to be told for them here.

On Friday mornings, Greg Carafello is a volunteer docent. He’s been here since it opened. “I’m a survivor of Two World Trade,” he said. “I was here that day, and I owned a business inside the building.”

The owner of a digital printing business in the South Tower, he nearly died on 9/11. His office was destroyed.

And yet here he is, week after week, right where it happened.

Teichner asked what he gets out of volunteering at the site.

“I get a freedom from that day,” Carafello replied. “There’s a certain luggage that you carry since that day, and for me, it’s a freedom to speak to the people and to share the experience. But also, it’s just cathartic. It lets me feel better in sharing my story with them.”

He’s with another printing company now, and could work anywhere. But his office is on the 85th floor of the new 1 World Trade Center.

Carafello is the only Twin Towers businessman willing to take a chance on the site again.

“It’s an act of pride. Coming back to one of the greatest buildings that I’ve ever been involved with, as far as looking at the way it’s built and the beauty of it, I think it is a salute to what we do in America.”

It is 1776 feet high, counting its spire. And like practically everything else on the 16-acre site, it didn’t happen without fights over its design, over its name (One World Trade Center instead of the original “Freedom Tower”), over what if, God forbid, there were another attack.

“One World Trade Center is built around a concrete core,” said Dupré. “That core is made of the strongest concrete ever used anywhere on a skyscraper. And so should anything happen, all of the occupants, as well as all the communication systems, everything you might need, it’s all protected inside of the core.”

There are ghostly nods to the Twin Towers. But what is new here at what used to be called ground zero has been built to be beautiful. The Oculus is a train station and a shopping mall.

“When I came in here the first time, it was almost heavenly, in a way,” said photographer Daniel Jones.

“Sunday Morning” commissioned Jones to take pictures of the Oculus.

Fifteen years after 9/11, the World Trade Center is still a work in progress, with as many as three buildings not yet even begun. The cost: $15 billion and counting.

Too much? Or a necessary down payment on healing?

Dupré said, “26,000 people worked on this site. They gave it their all, and in the process of giving it their all, of doing backbreaking work, they also were the beneficiaries of the redemption that comes with that. They were after completion. They were after wholeness, and there isn’t a single person that did not say they worked on this project on behalf of all those who died.”