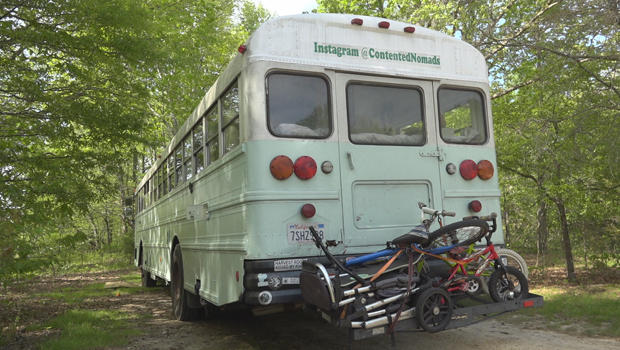 WATCH THE FULL MAY 26 EPISODE!

COVER STORY: Van life: Making one's home on the open road | Watch Video
From baby boomers to millennials, some people have found a roadmap to happiness by living their lives on the open road, in RVs or converted vans. Tony Dokoupil meets a family of six who live in a converted school bus, and with Bob Wells, an oracle of online information about living on the road.

Images featured in the story were generously provided by the following folks:

ALMANAC: The rise of Dracula | Watch Video
The immortal vampire first saw the light of day when Bram Stoker's horror novel was published on May 26, 1897. Jane Pauley reports.

ART: Monumental women: Breaking the bronze ceiling | Watch Video
New York City's Central Park is filled with statues honoring noted historical figures, even a famous dog – and all of them are male. Nationwide, there are more than 5,000 outdoor statues of people of all sorts, but less than 8% of them are of women.  Faith Salie reports on the Monumental Women Campaign, and Equal Visibility Everywhere, two groups that say it's time to put more and more women up on a pedestal.

MUSIC: Teddy Abrams, the Louisville Orchestra's rock star | Watch Video
At 32, Teddy Abrams is the youngest conductor of a major orchestra in the United States, and he's done what most orchestras are desperate to do: increased the audience, young and old. Martha Teichner reports.

OF NOTE: "Sunday Morning" colleagues (Video)
What goes on behind the scenes to make "Sunday Morning" happen is anything but simple, and so we pay tribute to those who have worked for us - and many other CBS News colleagues - who are retiring. Behind every name is a story, a memory, and good reason to offer our thanks and best wishes.

ON BROADWAY:  Annette Bening on "All My Sons" | Watch Video
Serena Altschul talks with the actress, now a Tony nominee for her performance in the Broadway revival of Arthur Miller's "All My Sons."

MUSIC: The War and Treaty | Watch Video
As the duo The War and Treaty, Michael Trotter Jr. and Tanya Trotter sing some of the songs Michael wrote, while serving in the Army in Iraq, as tributes to fallen comrades – songs they now perform in concerts across the country and in their debut album, "Healing Tide." Conor Knighton reports.

OPINION: Scott Pelley on the American flag, and Americans' common purpose | Watch Video
The "60 Minutes" correspondent says "We the people" can only sustain a democracy when divisions do not recklessly tug at the threads holding us together.

CALENDAR: Week of May 27 | Watch Video
"Sunday Morning" takes a look at some notable events of the week ahead. Jane Pauley reports.

NATURE UP CLOSE: Our javelina scare
A trip through the Amazon brought "Sunday Morning" videographer Judy Lehmberg up-close-and-personal with a herd of peccaries.

Universal basic income: Will it work?