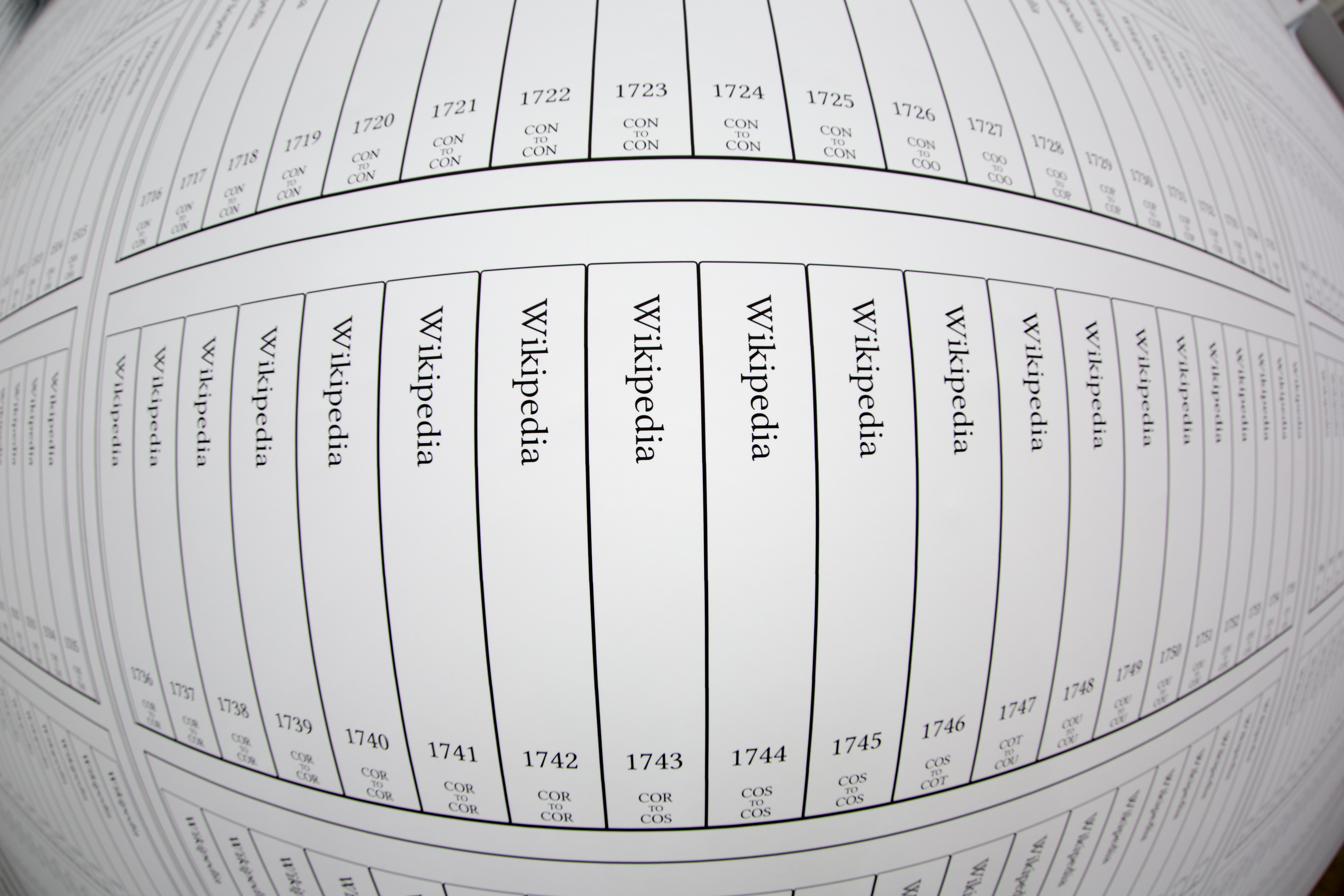 "Do you know what a petabyte is?"

New York artist Michael Mandiberg posed the question knowing full well what the answer would be. The he answered it himself: "I don't really."

His point? You can understand academically what a petabyte is (it's 1,000,000 gigabytes -- 10,000 times the memory storage of the biggest iPhone 6) but for most of us, it's really, really hard, nearly impossible, to truly grasp what that means.

With this in mind, Mandiberg looked at the seemingly bottomless wealth of information on Wikipedia and wondered how a mere mortal could possibly appreciate how much data that really is.

The solution was deceptively simple: Print it out.

So Mandiberg turned Wikipedia into a book. Well, many books. Seven thousand, four hundred and seventy-three books, to be exact.

Using some programming knowhow, he wrote software that downloaded all the articles in the English edition of Wikipedia -- about 50 gigabytes' worth -- and dropped it into a database he created. From there, he cleaned up the data a bit, and wrote another program that organized all 11,594,743 downloaded entries into distinct PDFs, complete with covers.

He then ran a final piece of software that uploaded all 7,473 volumes, along with a 91-volume table of contents and a contributor index of 7.5 million volunteer authors, to a print-on-demand site called Lulu.com.

The upload process was the center of an exhibition at a New York City gallery in June. It took 25 days.

For the show -- called "From Aaaaa! To ZZZap!" -- Mandiberg printed and bound 106 volumes and represented the rest with walls of painted bookshelves.

The names of the volumes often speak -- well, you know. Volume 3030 starts at "Hulk (Aqua Teen Hunger Force)," referring to an edgy cartoon for adults, and runs through "Humanitarianism in Africa." Volume 4291 goes from "List of serial killers by country" to "List of Shakespearean characters L-Z." And number 4409: "List of Vegetable Varieties - List of veterans of World War I who died in 2001."

The whole "Print Wikipedia" set, comprising 5,244,111 pages, can be purchased on Lulu.com for $500,000, a figure that covers production costs and sounds appropriately impressive. ("Half a million gets people's attention," said Mandiberg. "Not 450,000.")

And though Mandiberg doesn't necessarily expect the collection to sell, he does hope people will buy individual volumes for $80 apiece.

He also hopes his work will help people begin to truly understand the vast universe of data swirling around us at all times.

"We have no idea how much data is sitting in NSA's server farm, no idea how big Facebook's database is. We understand it's big, but we don't have a sense of it. It's almost impossible for us to have as sense of it," he said. "This is a way of really understanding how big things are."

Jeffrey Kluger, Time Magazine editor-at-large, joins “CBS This Morning: Saturday” to discuss an astonishing breakthrough in nuclear fusion at California's Lawrence Livermore National Laboratory and why some might call it energy's holy grail