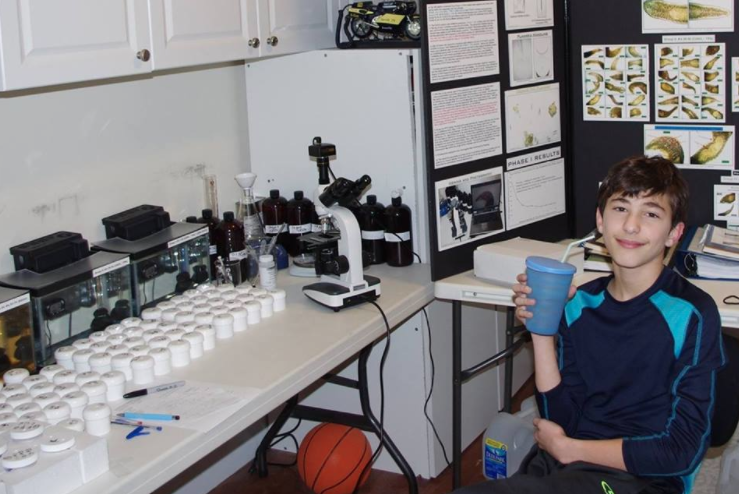 Stephen Litt has been conducting science experiments since he was in first grade. Every year, the projects became more and more complicated — until finally, as a 7th grader, he came across something that gained national attention.

The 12-year-old boy from Marietta, Georgia, discovered evidence that chemicals in green tea may have cancer-fighting potential.

For this year’s science fair project, he tested epigallocatechin-3-gallate (EGCG), an antioxidant in green tea, to determine whether it could prevent breast cancer tumors in planaria, a type of flatworms.

The research, which was part of his award-winning project for the Georgia Science and Engineering Fair, earned the boy praise from scientists across the country. He was even invited to go on a private tour of the Allen Discovery Center at Tufts University while on spring break in Boston two weeks ago.

“It’s not a cure for cancer,” his father, Lesley Litt, who trained as a chemist and assisted with the project, told CBS News. “What he found is a way to prevent cancer in these worms from those specific carcinogens. Their DNA is not the same as humans, but a professor at Tufts and a few others, they want to know what’s going on — they want to help.”

Stephen was originally interested in researching the malaria virus after reading about it in class back in October.

Around that time, two close family friends were diagnosed with breast cancer. That’s when Stephen shifted his focus.

“He started reading about cancer, specifically breast cancer,” Litt explained. “He found an article about how the Japanese might have lower cancer rates because of green tea. He then read an article in Live Science about green tea’s anti-cancer secrets.”

The article noted that in Japan, where green tea consumption is high, prostate and breast cancer rates are about three times lower when compared with the United States, according to the World Health Organization, although many other factors may play a role.

Is there really a connection between green tea and fighting cancer? Stephen had to find out.

So the boy, with help from his father, set up a lab in his house. Stephen ordered 100 planaria, which he divided into 4 groups. Each group was exposed to a different substance over the course of four weeks.

Carefully, Stephen studied the changes the worms experienced, documenting every tumor grown over the month-long period. By the end of the experiment, Stephen determined that the worms exposed to EGCG and carcinogens didn’t grow any tumors, proving the antioxidant may actually help fight cancer growth in worm cells.

“We’re very far off from finding a cure for humans,” Litt clarified. “But this really does advance the research and give us more insight into what’s going on with human cancer cells.”

While it’s a good start, Litt says his son’s study is just beginning.

Next year, he’s hoping to get a better microscope and hopes to transplant real breast cancer tissue into these worms.

“He could use another year or two, hopefully at a university lab,” said Litt, explaining that his future research will become more complicated.

In the mean time, Stephen has plenty to keep him busy. Not only is he a straight-A student, he’s a Boy Scout, working on becoming a black belt in karate, he plays tennis, and he’s one of the top oboe players in the state.

“Sometimes he even has time to play on his computer,” Litt said.

His parents couldn’t be more proud of the aspiring chemical engineer, especially with his most recent science experiment.

“He got results, which you don’t always get,” Litt said.