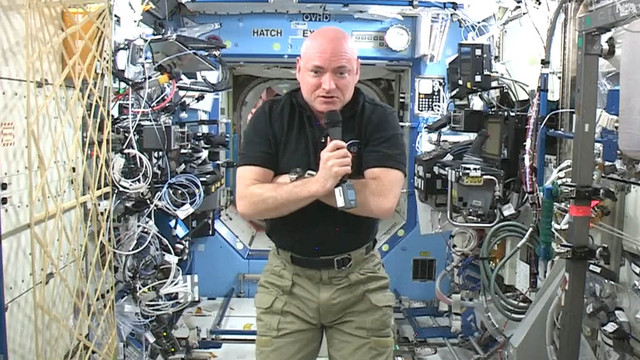 When NASA Commander Scott Kelly joined "Face the Nation" back in December 2015, the country was in the midst of an historic -- and divisive  presidential campaign. Although Kelly was aboard the International Space Station, suspended hundreds of miles above the earth's surface, he and the other astronauts onboard still followed the election as avidly as their counterparts back home.

"We have the news on pretty much all the time unless we're watching something specific," he said. "And we have coverage about 50 minutes every hour; so I do follow it very closely."

Asked whether he had any thoughts on the election, Kelly was tight-lipped. "I have to say it's been very interesting," he said with a smile.

Needless to say, things have changed quite a bit since Commander Kelly was in space. The celebrated astronaut, who holds the U.S. record for most time spent in orbit, will be back on "Face the Nation" this Sunday (this time from Earth, from our studio in Washington).

Kelly will offer his unique and invaluable perspective on life in space. It's the subject of his new memoir, "Endeavor," a blunt, honest portrait of the highs and the lows of life on the space station.

Make sure to check your local listings and tune into "Face the Nation" this Sunday morning.