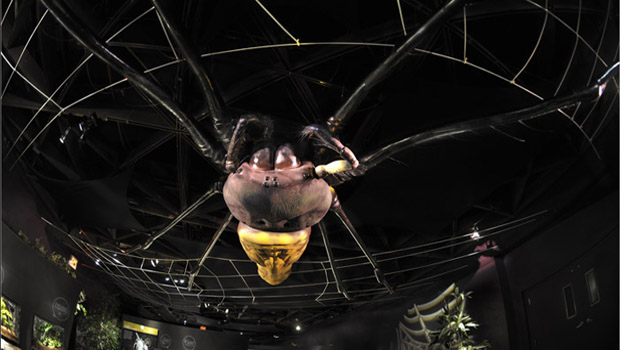 A fishing spider waiting by a small puddle for prey, a golden-web-spinning spider and some of the world's largest tarantulas -- including the massive Goliath bird-eater -- are among the cast of arachnids on display for those adventurous humans hoping for a close encounter with these smart, eight-legged creepy-crawlies.

Starting July 4, the "Spiders Alive" exhibition returns for a second time to the American Museum of Natural History (AMNH) in New York City, offering visitors the opportunity to see a select group of spiders, including tarantulas, and scorpions up close, as well as learn little-known facts about their venom and silk, their diversity and their behavior.

The exhibition features 20 species of live arachnids, including 16 spider species and two scorpion species. Museum visitors can also see 100-million-year-old spider fossils, examine the anatomy of large tarantulas and glimpse at the world's largest research collection of spiders, which includes more than a million specimens. [See Creepy Images of the Spiders on Display]

"Some of our visitors are likely to arrive with some fear of spiders," said Norman Platnick, AMNH curator emeritus. But the reality is that, in most cases, spiders pose no threat to people, Platnick added.

"Many are so small that even if they tried to bite you, they couldn't break your skin," Platnick told reporters on July 1 at a viewing of the exhibition. "And their instinct is to get as far as possible from anything as loud, large, noisy and obnoxious as a human being."

Instead, Platnick said, spiders are handsome, fascinating creatures that are actually beneficial to humans. They are the major regulators of pesky insects. It is estimated that spiders crawling on just one acre of woodland consume more than 80 lbs. (36 kilograms) of insects a year. If spiders were to vanish from Earth, the human population would likely be much smaller, if not nonexistent, as insects would have devoured the crops, Platnick said.

Exhibition visitors will also learn about the amazing properties of spider's silk, which is stronger than high-grade steel of the same diameter. Some companies, and even the military, are looking into synthesizing and producing spider silk to use in products that have to be flexible, yet very strong. Only 50 percent of spiders use their silk to build webs. Others hunt their prey on foot, using their silk for other purposes, such as to make egg casings or cocoons.

Among the live spiders in the exhibition is the Goliath bird-eater tarantula (Theraphosa blondi), one of the largest spiders in the world, which measures about 12 inches (30 centimeters) across. Other arachnids on display include the Chilean rose hair tarantula (Grammostola rosea) from the deserts of Chile, the emperor scorpion (Pandinus imperator) native to rainforests of West Africa, African whip spiders (Damon variegatus) with whiplike antennas measuring up to 10 inches (25 cm) long, and a giant vinegaroon (Mastigoproctus giganteus), which can spray a vinegarlike chemical when it is bothered.

A number of live brown recluses and black widows -- the only two spider species in the United States that spit out venom that's harmful to humans -- are also on display. Visitors will learn to recognize these two spider species by their distinctive violin shape or hourglass patterns, so they can steer clear of them.

Spiders inhabit a diverse array of habitats, ranging from deserts to rainforests to crowded cities, and are found on every continent but Antarctica. Over 250 years of spider research, scientists have identified more than 44,500 species of spiders, but they estimate there are at least as many yet to be discovered.