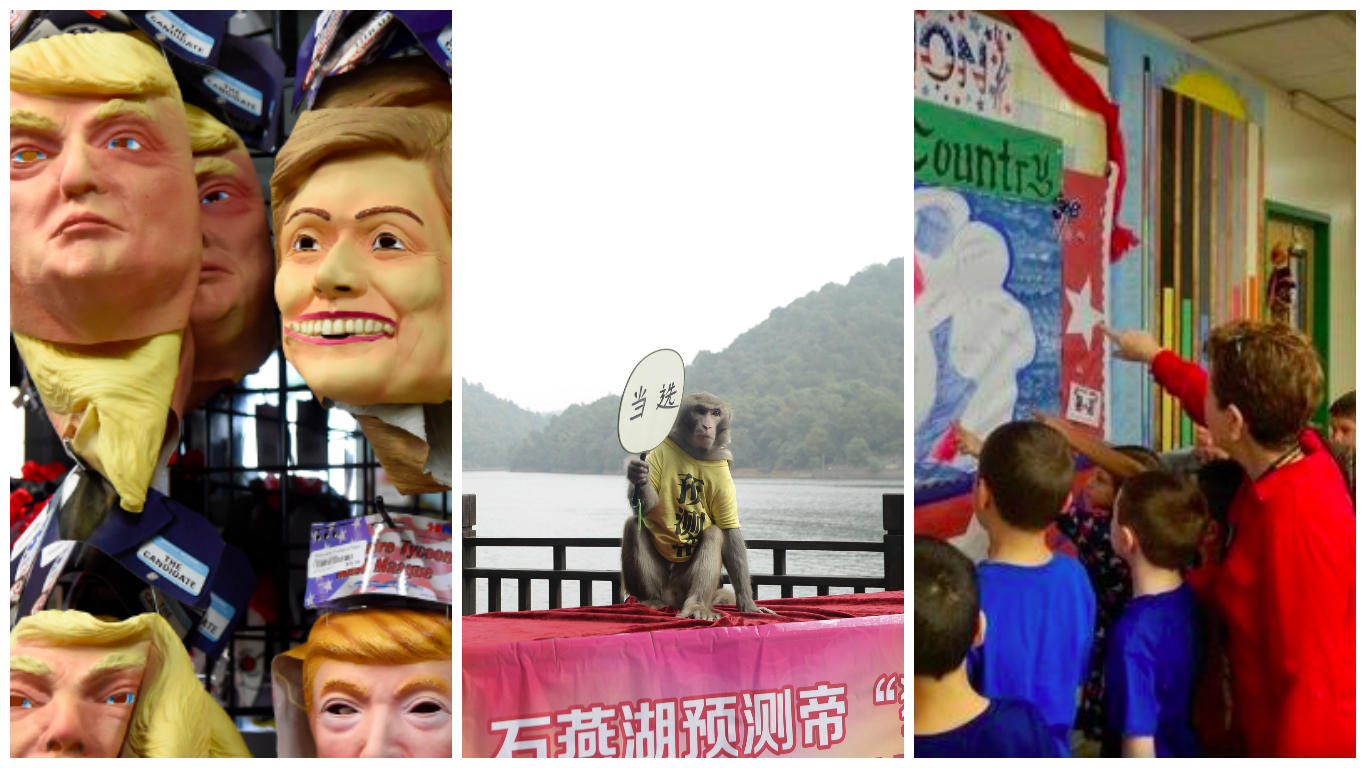 In such a tumultuous election year, it’s hard to know what to expect on November 8th. There are, however, a few tried and true predictors of U.S. presidential elections that have weighed in yet again. Sure, one’s a monkey and another’s based on the sales of Halloween masks. But combined, they have an estimated 112 years of successful predictions to their names. And currently, these five offbeat predictors are skewing 3-2 in favor of Donald Trump.

For the past 48 years, students at Benjamin Franklin Elementary School in Yorktown Heights, New York, have been casting their “votes” to determine the winner of the U.S. presidential election. They spend months learning about the candidates. They debate the facts. Then, in small groups of around five students, every class from kindergarten through fifth grade heads into the mock polling booth.

And for the past 48 years, the school has never been wrong.

“We have minority groups, students that speak English as a second language, white collar, blue collar,” Benjamin Franklin Elementary School principal Patricia Moore told CBS News. “It could be representative of the nation.”

Clearly, it is. For nearly half a century, the little melting pot has correctly predicted the outcome of the election based on the popular vote. And this year, after all the votes were tallied, Hillary Clinton won with 52 percent (277 votes) compared to Republican rival Donald Trump with 43 percent (230 votes). Now, the students just have to wait and see if they’re right... again.

Every four years, the retail chain Spirit Halloween puts out a survey of which presidential candidate’s mask people plan to dress up in for Halloween. And for the past two decades, this poll has correctly predicted every presidential election winner. This year, the “mask index” has Donald Trump ahead of Hillary Clinton, 55 to 45 percent.

A mystic monkey in Changsha, China also got in on the action this year. Shiyanhu Ecological Tourism Park in China’s Hunan province regularly utilizes the animal, named Geda, to predict the results of European soccer matches. In fact, this year, Geda correctly predicted that Cristiano Ronaldo’s Portugal would win the European football championship, which they did... in overtime.

So, fresh off his sports success, Geda’s handlers figured, why not try the monkey’s luck at politics as well? The 5-year-old monkey, whose name means “goose bumps,” is believed to have the gift of prophecy, after all.

Consequently, last Thursday, Geda stood on a red table between two life-size cardboard cutouts of Republican nominee Donald Trump and Democratic nominee Hillary Clinton, as eager reporters looked on. He wore a yellow t-shirt which read “king of prophets” in Chinese. And after a thoughtful process of sampling bananas next to each cutout, the clairvoyant monkey chose Donald Trump as the clear winner. The animal even thrilled nearby cameramen by planting a celebratory kiss on the Republican candidate’s face.

American University professor Allan Lichtman has correctly predicted the results of every presidential election since 1984. Interestingly, though, his method does not rely on polls, demographics or an analysis of swing states. Rather, Lichtman has developed 13 keys to predicting the election based on the performance of the party currently in the White House.

“There’s a real theory behind this. And the theory is presidential elections don’t work the way we think they do,” Lichtman told CBSN anchor Josh Elliott in June. “They’re not decided by the turns of the campaigns, the speeches, the debates, the fundraising. Rather, presidential elections are fundamentally referenda on the performance of the party holding the White House. If that performance is good enough, they get four more years. If it’s not, they’re turned out and the challenging part wins.”

The history professor says he came across this method “totally by accident in 1981,” when he met a Russian geophysicist who wanted to collaborate using the methods of earthquake prediction to predict elections. Lichtman insists that’s not nearly as far-fetched as it sounds because both prediction formulas gauge stability vs. upheaval.

As for the results of this election, Lichtman says 2016 has been the hardest race he’s ever attempted to predict. When the author of “The Keys to the White House” appeared on CBSN in June, he had yet to make his call. However, since then, he has doubled down on a Trump win on November 8th.

Every election season since 2004, The Monogram Shop in East Hampton, New York has correctly predicted the winner of the U.S. presidential election based on its sales of reusable plastic cups. The cups — which are emblazoned with the names and logos of the Democratic and Republican presidential tickets — are sold for $3 a piece, and a tally of the cup sales is then kept updated in the store’s window.

The Monogram Shop’s presidential cup sales begin just after Super Tuesday. And for the past three elections, the candidate that has sold more cups has gone on to win the election. So, local residents are anxiously keeping an eye on this year’s tally.

As of this weekend, Hillary Clinton has a strong lead over her Republican opponent, with 4,946 cups to Trump’s 3,388. It’s important to note, however, that the sampling of the electorate this contest measures is far from representative of the entire U.S. population. Residents and visitors in East Hampton are overwhelmingly white and very wealthy, with many houses in the town serving as vacation homes for the New York City set.