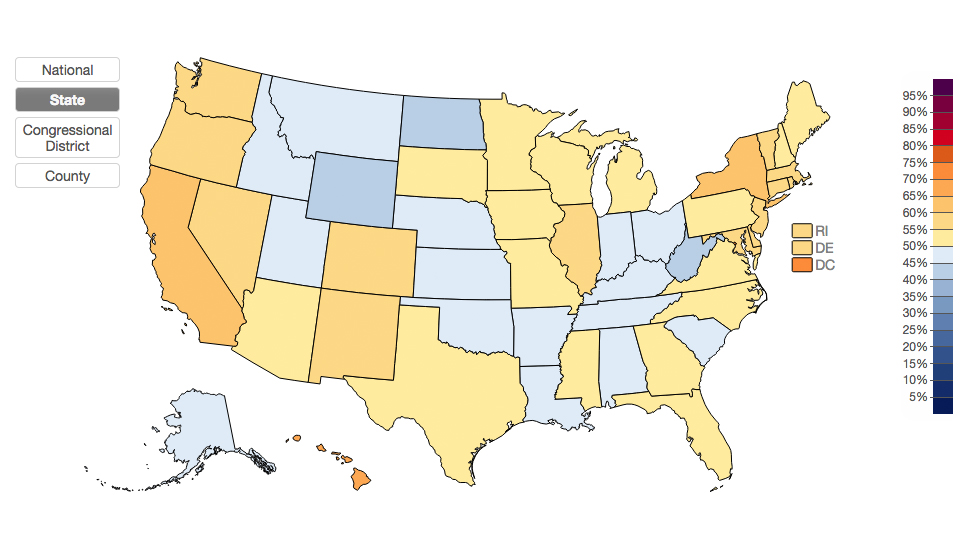 It seems that most American aren't listening to all the cynics who have called climate change a hoax or some kind of grand conspiracy.

In the one of the most detailed surveys of its kind, researchers writing Monday in Nature Climate Change found that an overwhelming majority of Americans believe climate change is real and that something should be done about carbon emissions.

The study by Yale and Utah State University researchers tallied opinions in 2013 on whether global warming was real and what should be done about it from survey participants in all 50 states, including 435 Congressional districts, 3,000 counties, and 381 cities across the nation. The researchers compiled their data into a set of interactive maps, which can be found at the bottom of this article.

Collectively, 63 percent of Americans were found to believe global warming but those numbers ranged from a low of 54 percent in coal-friendly West Virginia to 81 percent in Washington, D.C. From there, citizens in Hawaii, New York and California and are the next biggest believers at 75 percent, 72 percent and 70 percent respectively. Lowest numbers generally were found in Middle America and in parts of the Southeast.

The findings would appear to show public attitudes are becoming closer in line with the science, which has found "there is no ambiguity" on climate change. It also suggests the thinking of some skeptical politicians, like Sen. Jim Inofe from Oklahoma, who has called global warming a hoax and has denied its existence, could be out of line with the national mood on the issue.

"The results show that most Americans everywhere think that global warming is happening. That becomes pretty clear," Yale University's Anthony Leiserowitz, a co-author on the study, told CBS News.

"That is the context in which every national leader whether in the House or Senate is operating," he said. "You will often hear comments from people more dismissive of climate change that the American people don't believe in climate change. In fact, we find overwhelmingly they do think it's happening."

Fifty-two percent said they were worried about global warming, though that differed quite a bit by state, with just over 40 percent of respondents in Wyoming, North Dakota and West Virginia showing concern. Nationwide, only 42 percent said it was already harming people in the United States and only 34 percent felt they had been harmed personally by rising levels of greenhouse gas emissions that have caused temperatures to rise - and led to record highs in 2014, especially in places like Florida, which has been hit by rising sea levels, and California, which is enduring a four-year drought.

While only 48 percent of respondents believe humans cause climate change, a clear majority think something should be done about it. Eight-three percent nationally think more research should go into renewable energy sources while a surprising 81 percent support regulating CO2 as a pollutant and 76 percent want strict CO2 limits on existing coal-fired power plants.

The last finding is significant, since it would imply most Americans back President Obama's Clean Power Plan. The rule for coal-fired power plants calls for a 30 percent reduction in CO2 emissions by 2030. Power plants represent the largest source of emissions in the United States.

Drilling down to state, county and city level, the study found strong belief in climate change in New York City, Chicago and Los Angeles while "proportions in most rural counties are significantly lower." The presence of colleges and universities also "was a factor associated with high levels of belief," while counties with oil drilling or fracking operations tended to be home to fewer believers.

Leiserowitz said many of the demographics where belief was strongest have much in common. They are typically pro-government with a liberal bias that includes support for legalizing marijuana and gay marriage.

"They are more trusting of environmental science and they are also more supportive of government action to deal with it," Leiserowitz said.

"It is helpful to compare and contrast them with those who are dismissive and who don't think its real," he said. "These people by contrast have very strong individualistic world views so it's all about individual freedom, individual autonomy ... These people are most hostile to the issue of climate change. What is fascinating is that a major motivation of their hostility isn't the science or the reality of climate change but they are afraid of the policy solutions to climate change."

One of the more interesting findings is that Latinos were big believers in climate change, with Latino-dominated Southwestern Texas showing rates 10 percent higher than in other parts of Texas. That builds on earlier research, which found they are the most concerned of any racial or ethnic group in the United States about global warming.

Leiserowitz said scientists are still trying to understand why that is, but a few theories have been put forth. Among are their Catholic faith, Latino's connection to the land and the fact that many have come from South and Central America, where the impacts of global warming are more apparent.

"When a weather disaster hits like drought or flood or storms, it does far more damage down there than it does here," he said. "They understand vulnerability."