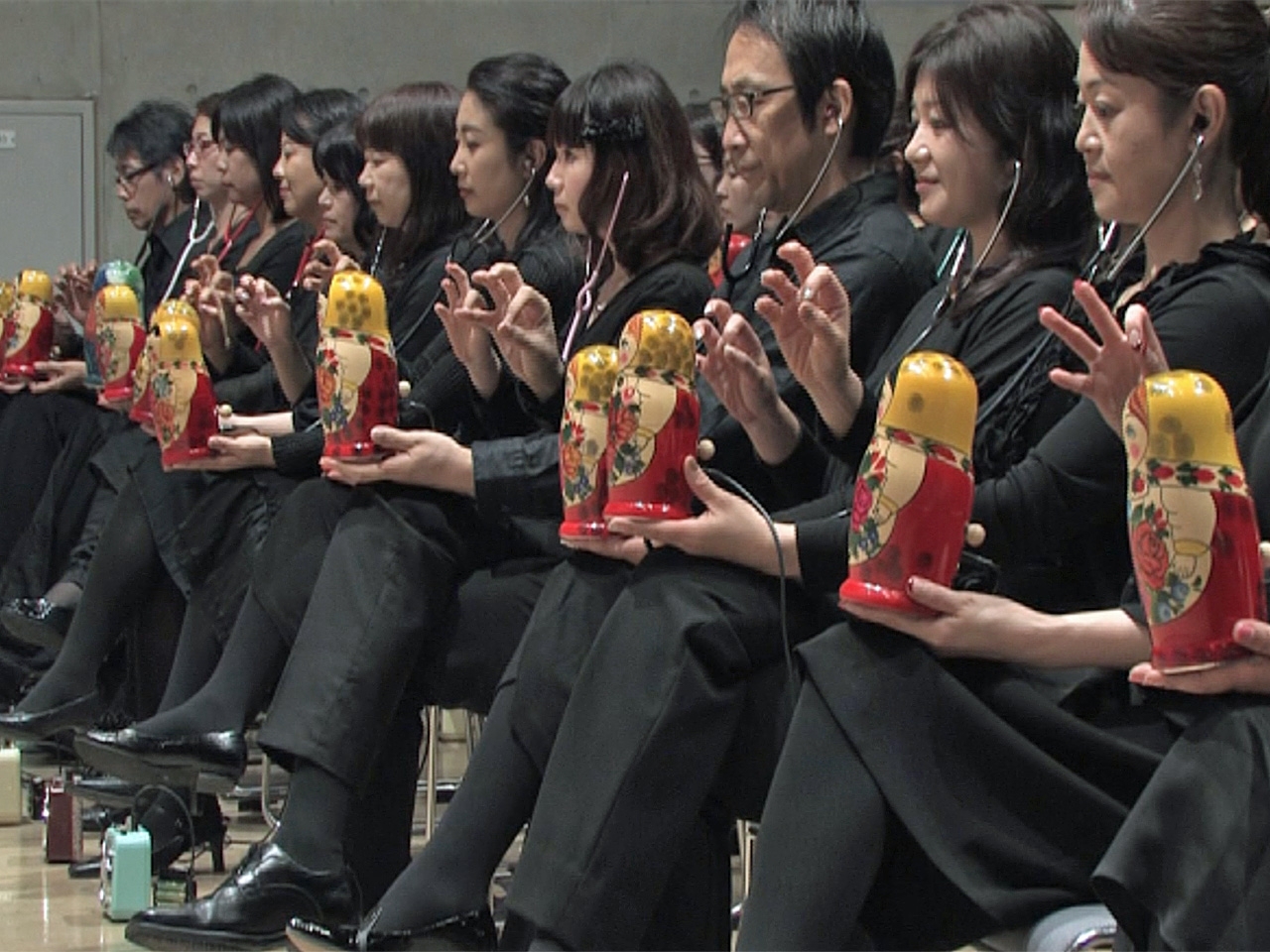 HAMAMATSU, Japan It was a sight fit for an episode of the Twilight Zone: Dressed in black formal wear, a crowd of musicians filed into a concert hall west of Tokyo and sit down to play. But instead of raising flutes or violins, their instruments were garishly painted Russian dolls -- and not a single fingertip made contact with the instruments.

When the musicians warmed up, the usual pre-performance cacophony sounded like an alien landing -- a symphony of eerie wailing. When the concert began, the musicians pinched at thin air, yielding a bizarre but recognizable rendition of Amazing Grace.

Grimly motionless but for their waving hands, they looked like a coven of well-dressed witches trying to cast a spell over their smiling toys.

The 272 musicians gathered from across Japan to grab a new world record -- the world's largest theremin ensemble. The featured instruments are actually modified versions of the theremin crammed into empty Russian nested dolls, dubbed "matryomin" by their creator.

The world's only instrument played without any direct contact, the theremin's high-pitched vibrato is familiar soundtrack to anyone who has ever screened a sci-fi flick.

Invented in the Soviet Union around 1920 by scientist Leon Theremin (who taught music aficionado Vladimir Lenin how to play it), the electronic device has been used over the years to add its distinctive, spooky sound to the Beach Boys' hit "Good Vibrations" and the cult-classic daytime soap opera Dark Shadows.

A vocally simulated theremin was used in the opening theme to the Star Trek TV series. Theremin have also featured in many films scores and tunes by artists including Led Zeppelin and the Rolling Stones.

The instrument is notoriously difficult to master -- even Brian Wilson eventually gave it up in favor of a simplified device that produced the same sound.

But today's Japanese version, the matryomin, went over well with the representative on hand from the Guinness World Records office.

"I was honestly very moved by the performance, said Gulnaz Ukassova, an official adjudicator for Guinness World Records Japan."It was very touching."

Leading the musicians was Masamichi Takeuchi, 46, Japan's leading theremin proponent and creator of the nested-doll version.

"No other country has as many theremin players of such high skill as Japan," he said. While Takeuchi doesn't know how many there are exactly, he has sold 4,500 of the miniature theremins, and runs a network of music instructors dedicated to the instrument.

In 2003, Takeuchi, who studied music technology, hit on a simplified model using the empty Russian nested doll filled with a miniaturized amp, speaker and antenna.

"Matryoshka are made from hollowed-out linden wood, which has excellent sound resonance," he said. "Good violins and pianos, for instance, are determined not by the quality of the strings, but by the wood used to make them. So a robust sound is produced by the doll's body -- which seems odd when you consider they are electronic instruments."

Instead of note-picking near large antennas, as with conventional theremin, matryomin musicians pluck away at the air behind the doll's head.

Takeuchi said his invention is much easier to play, since it is one-handed - controlling only the pitch of the theremin.

"Unlike a piano or guitar, there's no keyboard or fret to play, so you have to create an imaginary one in your head," said Sae Sato, an instructor based in Tokyo. "That makes it more challenging. But I don't think it's any harder to learn than other instruments."

While the theremin is usually associated with the spooky and spine-tingling, Takeuchi's followers prefer more prosaic tunes, like Edelweiss and Love Me Tender.

At the recent Hamamatsu performance, Takeuchi led the group in his own boogie-woogie arrangement of a Beethoven classic.

"To simply make scary music, you don't need technical skill," Takeuchi said. "What we seek is technique and musicality. All we care about is beautiful tone quality."

"Nothing," he boldly proclaimed, "is as fascinating as the theremin."