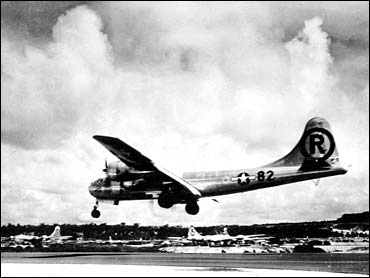 ATLANTA - The last surviving member of the crew that dropped an atomic bomb on Hiroshima has died in Georgia.

Theodore VanKirk, also known as "Dutch," died Monday of natural causes at the retirement home where he lived in Stone Mountain, Georgia, his son Tom VanKirk said. He was 93.

VanKirk was the navigator of the Enola Gay, a B-29 Superfortress aircraft that dropped "Little Boy" - the world's first atomic bomb - over the Japanese city of Hiroshima on Aug. 6, 1945. The bomb killed 140,000 in Hiroshima and 80,000 in Nagasaki three days later. VanKirk was 24 years old at the time.

Tom VanKirk said he and his siblings are very fortunate to have had such a wonderful father who remained active until the end of his life.

"I know he was recognized as a war hero, but we just knew him as a great father," he said in a telephone interview with The Associated Press on Tuesday.

In a 2005 interview with the AP, VanKirk said his World War II experience showed that wars and atomic bombs don't settle anything, and he'd like to see the weapons abolished.

A funeral service was scheduled for VanKirk on Aug. 5 in his hometown of Northumberland, Pennsylvania. He will be buried in Northumberland next to his wife, who died in 1975. The burial will be private.