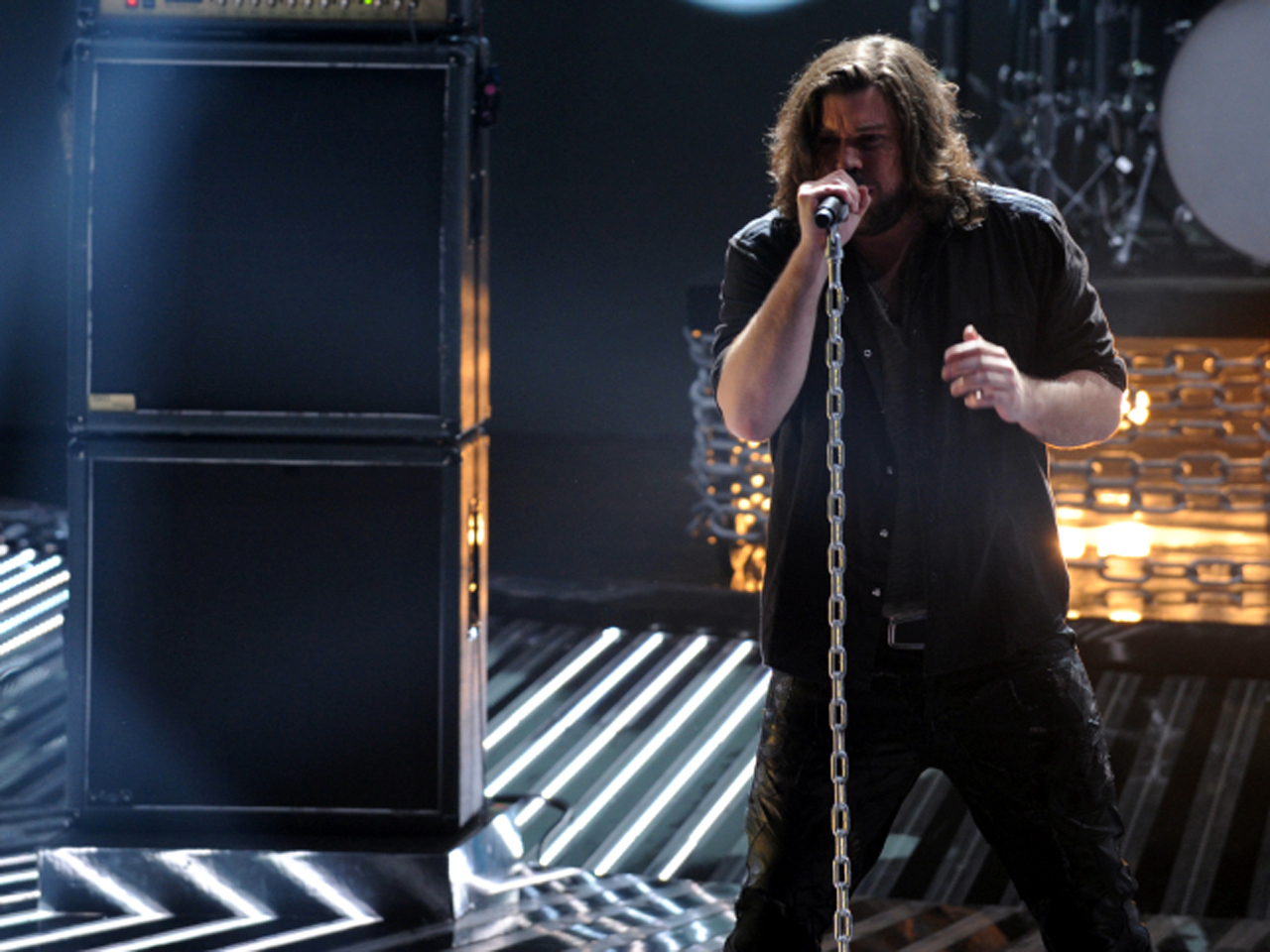 Rock and this collection of singers is a marriage as fine as ballet and Michael Moore.

Leroy Bell was, thanks to Nicole Scherzinger, asked to be Bob Seger. He's around the same age, so that shouldn't have been a problem.

It wasn't. Bell might be 60, but he can sing. So could the gospel singers behind him.

This was entirely competent as a tribute. It was actually enjoyable in its way, if "We've Got Tonight" is your kind of enjoyable song.

"You're still not working it like a rock star," said L.A. Reid, quite accurately. Rock stars are people with whom women want to have sex and men wish they were in order for women to have sex with them.

He was merely warming to his theme. Scherzinger was in Cowell's sights. "You're being mentored like a session singer," the Svengali told Bell.

"You should have been a shark. You're acting like a dolphin," he added, just in case Bell hadn't heard the ringing in his ears.

If Bell is enjoying styling beyond reason, Rachel Crow's hair has been styled to the point that even crows would think twice about living in it. It was as if Jean-Paul Gaultier had purchased drugs of dubious provenance and begun to fashion out of barbed wire what his eyes claimed they could see.

Crow's mentor, Cowell, decided to risk everything and ask her to sing "(I Can't Get No) Satisfaction." The idea here was to turn her into a children's pageant Duffy, as Duffy herself doesn't seem to have recorded much lately.

Because styling is all-important to Cowell, Crow was given a bunch of 60s dancers who had been cryogenically preserved just for this occasion. All that was missing was Mike Myers.

At one point, Paula Abdul was seen remonstrating with Cowell that he wouldn't get up and dance. Some would be grateful that he didn't. Reid loved it. He loved it because he thought Crow could make him some money. Oddly, Cowell seemed to concur.

It took at least 30 seconds to realize that Rene was singing Bob Marley's "No Woman, No Cry," which is almost a compliment. After last week's abject diffidence, Rene decided to project and protest. When he whipped off his jacket to reveal a T-shirt that read "Occupy All Streets," it almost seemed like he had learned staging overnight.

This was peculiarly enjoyable. I'm not sure Bob Marley would have loved it, but this audience did - despite Rene's shades making him look like Mickey Rourke's little brother.

"That was very original," said Scherzinger. "But it's not my favorite performance from you."

"It would have been great if the theme this week had been reggae music," said Cowell, with pointless pedantry.

Stacy Francis was asked to be Meat Loaf. This promised only one thing - understatement. Francis never looks happy when she's singing. In fact, she looks as if she's one step away from picking up a chair and thrusting it straight through someone's chest.

This performance was a little painful. She was half a note off throughout.

"This was my least favorite song you've ever performed," said Abdul. "The pitch was under." She was right.

"Let me start with the good news: Your hair looks better this week," said Cowell.

"I wanted rock. That was a pebble," he continued. He then referenced the Hilton Hotel. Francis looked like she wanted to punch him to needing false teeth. Worse, after the show, she vocalized her displeasure at the judges' comments.

Melanie Amaro was given a little R.E.M. Yes, Retro Emotional Music. At least it wasn't Mariah Carey or Whitney Houston. It was merely a Mariah Houston version of R.E.M.'s "Everybody Hurts."

The only salvation was that Amaro can sing. Really sing. This was professional. This was performance. This was pomp and circumstance.

"That was rock, right?" muttered Reid to Cowell. Turning to Amaro, he added: "That was not rock."

Scherzinger worried why she hadn't cried. Because rock's main purpose is, apparently, to make you cry.

Josh Krajcik was saddled with the Foo Fighters' "The Pretender." He would have been more fortunate if he'd been given Jackson Browne's song of the same name.

This was mindless, soulless and tuneless. But that's rock'n'roll sometimes. Krajcik attempted to impersonate a rock star. He did a passable job in the circumstances, because he's simply more talented than anyone else in this little pink show.

"You're the only person who's really rocked this house tonight," said Reid.

"That was bloody fantastic," added Cowell.

Some might wish that Astro would, just once, take his headphones off his neck. He looks like those people you see on a plane with those absurd inflatable neck pillows.

He rapped his way through a little Sting/P. Diddy collaboration called "I'll be Missing You." This, sadly, was bland, depressingly commercialized pip-pap. It would not have been out of place at a high school pageant. Somehow, I think Astro knew it.

This was pandering for votes from those who believe hip-hop to be the Devil's poetry. Of course, the audience loved it.

"That was a very strong song choice," said Scherzinger.

"Can you just suck for once?" asked Abdul, somewhat questionably.

For Astro, this was just another regular season game before the playoffs. He had time to wish his sister a happy birthday.

In sweet and delicate contrast, we prepared ourselves for Lakoda Rayne, Paula Abdul's last hopes. This was not unlike preparing yourself for surgery on your wisdom teeth.

Abdul, who sometimes seems trapped in times gone by, gave them Fleetwood Mac's "Go Your Own Way." Lakoda Rayne made a passable attempt at an energetic rendering - though the closer I stared at my fine television, the more it seemed that there was little actual live singing going on. Even the drummer of their backing band seemed not to be drumming to, well, the drum beat.

"This is the first time I've seeing you having fun," suggested Reid. He didn't feel it was either amazing or great, though.

"I thought tonight overall was a complete mess," encouraged Cowell.

Would Drew make a mess of the U2 song that Cowell gave her? Well, at least it wasn't some kind of Feisty ditty - although perhaps she would give it Feisty dittiness.

"I was waiting for the tempo to pick up," said Scherzinger. "I'm a little frustrated."

Drew is a little frustrating. The poor thing's only 14, but she seems to bear all the angst of at least a 15-year-old.

So within thirty seconds he was seen to slide between the open legs of at least eight long-legged girls in tight leather hot pants. Mammon 7, God 0.

In case you're wondering what song he was saddled with, it was Janis Joplin's "Piece of My Heart." In case you wondered what he was wearing, it was a sleeveless denim jacket with absurd leather studded sleeves beneath.

"Your mentor, the Devil, just put you in Hell," said Cowell. "I don't think the song suited you."

Rock is almost dead, you see. It's certainly comatose. "The X Factor" did nothing to engender its revival. This was not the kiss of life. It was the kiss of death.