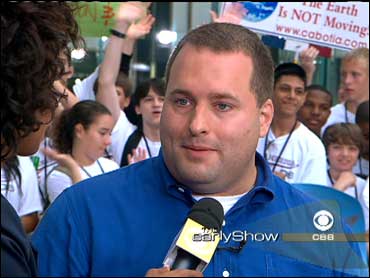 The chicken dance has become a staple at weddings receptions along with the electric slide and the macarena. The goofy set of poultry-inspired moves is usually danced at a point late in the evening when guests are at their most festive.

On Tuesday, hundreds of thousands of people are expected to take the chicken dance out of its usual setting in an attempt to break the Guiness World Record for the number of people doing the dance at one time.

The current record for the world's largest chicken dance is 72,000 people, set on Sept. 1, 1996 at the Canfield Fair in Canfield, Ohio. But the Texas-based Bouffard figures his state will have no problem beating the record.

Anyone can participate in the event, even if they're not anywhere near Texas. For more information, log on to chickendance.org.

Guinness World Records keeps track of mass participation events around the world. Here are a few:

Largest Country Line Dance
A total of 12,168 people danced to "Baby Likes To Rock It" for 7 minutes 40 seconds at the Happy Valley Recreation Ground — in Hong Kong! The event took place on December 29, 2002.

Largest Human Chain
Over 5 million people joined hands on December 11, 2004 to from a human chain 652.4 miles long. The chain stretched from Teknaf to Tentulia, Bangladesh.