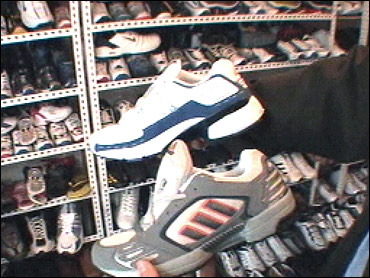 Name an American brand. Any brand, and any kind of product.

Clothing, computer chips, car parts. Just name it and we'll tell you something about it. It's probably being counterfeited in China as we speak.

For years, China has been the workshop of the world. And for years, American and other western firms have set up shop in China to tap into the enormous, cheap labor force.

The question is: Once the Chinese know how to make an American product, what's to stop them from copying it?

And what's to prevent the Chinese from shipping these counterfeits back to the United States? Not much, reported Correspondent Bob Simon last January.

The Chinese government didn't want 60 Minutes to bring our cameras, so we did - undercover. Inside, we saw a club that looked and felt like the Great Big Bertha. Not only that, we were offered Callaway irons, putters, golf bags, gloves, and even a Callaway umbrella.

And the best part? What would retail for close to $3,000 in the United States, was being offered to us for $275. Why? Because, as the owner of the shop readily admitted, the whole set was a copy.

"The first clue we had to that problem was when people began sending in the clubs as they broke," says Stu Herrington, head of security for Callaway Golf. He's seen fake Callaway clubs pour into the United States from China. "And of course, repairs took a look at this broken club and realized right away it was fake."

But fake golf clubs don't begin to suggest the enormity of the problem.

"We have never seen a problem of this size and magnitude in world history. There's more counterfeiting going on in China now than we've ever seen anywhere," says Dan Chow, a law professor at Ohio State University who specializes in Chinese counterfeiting. "We know that 15 to 20 percent of all goods in China are counterfeit."

And these days, the way China's economy is booming, 15 to 20 percent means tens of billions of dollars.

Evidence of the counterfeiting trade can be seen every day at one Hong Kong warehouse, where counterfeit watches, shoes and computer chips -- all copied in China and seized in Hong Kong -- are tossed onto a conveyor belt and consigned to the dustbin of history.

But it's like stopping the rain. The seizure may look impressive, but every day, 6,000 shipping containers leave from Hong Kong for America, packed with products made in China. Only a small fraction of those containers are ever inspected.

"This is the most profitable criminal venture, as far as I know, on Earth … Counterfeiting," says attorney Harley Lewin, who has been chasing counterfeiters from China for more than 20 years. "And your partners don't kill you."

And now, China is the undisputed capital of counterfeiting.

60 Minutes went undercover and found a small factory in Donguan churning out fake Callaway golf bags at a rate of 500 a week. The workers, mostly from rural provinces, make a few bucks a day and don't have the slightest idea that what they're doing is illegal.

China may be the largest labor pool in the world, but ultimately, it's all in the family.

"When you teach the production line here how to make your product, if it's a mold, that mold will find its way down to a relative's production line down the street, an uncle, or grandfather, or husband, or brother," says Lewin.

And the buyer could be a daughter or a son. So if you thought that children's books would be off-limits to counterfeiters, think again.

Harry Potter is as popular here in China as he is in the rest of the world, so you can imagine the excitement when volumes five, six and seven of the Harry Potter series appeared in stores all over China last year with J.K. Rowling's name on them.

There was only one problem. As any American kid could tell you, J.K. Rowling didn't write them. The Chinese counterfeited something that doesn't exist.

What are some of the most astounding things that Lewin has seen?

"We had prunes the other day. Fake prunes," says Lewin. "Coming from China to Thailand."

So if you can copy a prune, why can't you copy a car?

But don't think it's just for export. At a shopping mall in Shenzhen, there are hundreds of stores packed with brand-name goods. Not one of them is real.

To the untrained eye, necklaces and studs marked Tiffany's look real. So do blue pills marked Viagra, which promise to make you a stud.

The mall is not exactly underground. It's five stories high. And not much of a secret. The local police are here, but only to give directions. 60 Minutes came here with Jack Clode, an investigator for Kroll Associates.

"They do raids here. But very quickly, the shops are back in business," says Clode, who adds that once a shop gets raided, it's usually not gone for good. "It might change its name, it may shift one floor up or down. But it will be back in business."

Whether it's retail or wholesale, counterfeiting is an industry that supports entire towns.

Yiwu, a few hours from Shanghai, is the wholesale counterfeit capital of China. Villagers from around the country flock here by truck and by bike to buy or to sell or both. In the indoor market, you'll find batteries that look like Duracell even if they're called Dynacell or Supercell.

Kodak film is popular. So are Gillette razors and Mickey. A 100 percent genuine? Maybe not. The Chinese are addicted to brand names even if they don't always know how to spell them.

With the help of Kroll investigators, we found a counterfeiter who took us to her garage in Yiwu where she displayed western running shoes ready to be copied.

We wondered how long it would take to make copies of Nikes. The answer? Within 10 days, 1,000 shoes at $4 a pair. Was this counterfeiter afraid of the police? Not at all. She said she had a good relationship with the cops.

And what does the chief cop in Beijing say about the open and widespread practice of counterfeiting ?

"This phenomenon does exist. I admit its existence. I've also seen it. But there is a question of how hard you crack down. That's because under Chinese law, someone cannot be prosecuted only because he sells a small quantity of fake products," says Gao Feng, the head of China's anti-counterfeiting police unit.

There were about 1,000 police raids last year, often followed by press conferences and displays of the seized goods. But American companies say that's what it amounts to -- just a display. Why? Because the relationship between the cops and the counterfeiters is often less confrontational than cozy.

"I remember going on a raid one time in which the counterfeiter and the local enforcement officials seemed to know each other very well. He said hello. He actually served tea to us when we went and seized the product and carted the product off. Of course, I was outraged at the time," recalls Chow.

But that outrage is not shared by the Chinese authorities. They will do anything to avoid social unrest, and counterfeit factories keep a lot of poor people employed. American firms may not like it, but they may just have to live with it.

"We don't want to ignore counterfeiting, but for those foreign companies, when they enter the Chinese market, I'm afraid they should also pay some cost due to the realities of China," says Feng.

Trouble is, it's not just a problem for American companies. Consumers beware.

"You won't die from purchasing a pair of counterfeit blue jeans or a counterfeit golf club. You can die from taking counterfeit pharmaceutical products," says John Theriault, head of global security for the American pharmaceutical giant, Pfizer. "And there's no doubt that people have died in China from bad medicine."

Chinese government studies indicate that thousands of their own citizens have died because of fake medicines -- counterfeit drugs that may have had some active ingredients or not.

But they look good. One example: Pfizer's popular drug, Viagra, a favorite among Chinese counterfeiters.

While Pfizer is confident Chinese counterfeits haven't infiltrated American pharmacies, there's that market that transcends state lines. It's the Internet, where you'll find fake expensive brand names sold for next to nothing on the Web - and often to Americans.

"The oldest adage in the world is when you get something for nothing, that's usually what it's worth," says Lewin. "Except people go brain dead when they buy this stuff."

60 Minutes wanted to see if we had gone brain dead. Remember that set of Callaway golf clubs we bought for $275 at a corner shop in China? We brought them to Callaway's headquarters in California, and had our clubs inspected by a pro, an investigator and a robot - all in an attempt to see how good the counterfeits were.

What we learned is that the Great Big Bertha of China was hitting 240 yards on the robot - only 10 yards shorter than a genuine. Pretty good.

But then, we gave them to a real golfer, Jim Colbert of the PGA Champions tour, who swings with Callaways. "Uh, that's ugly," says Colbert.

Our club kept slicing the ball to the right of the fairway. Then Herrington showed us why: "This is supposed to be a titanium club. You paid for titanium, and you got steel."

Unless the average golfer had a saw, he or she wouldn't necessarily notice what 60 Minutes discovered - that the head of our Great Big Bertha was actually two pieces welded together instead of one, which is what one might expect for $275.

"Folks who have bought a set for $275 in China bring them to the United States and they Internet auction them for $1,500. And you know, that's a pretty good margin in anybody's book," says Herrington.

So good, that American companies are having trouble staying even one step ahead of China's counterfeiters.

"On the day that Callaway Golf releases a new club, they can purchase one, and within seven days, using computer-assisted design and their modern facilities, begin cranking out counterfeits."

The Chinese authorities insist that they're working on the problem, and that they are sensitive to American concerns. But 60 Minutes thought about that as we strolled down Silk Alley in Beijing -- where you can buy everything except the real thing.

Silk Alley is just a few steps from the American embassy.

Since this report last January, dozens of children from one eastern Chinese city died after being fed counterfeit baby formula. Thousands of boxes of counterfeit formula have been discovered.