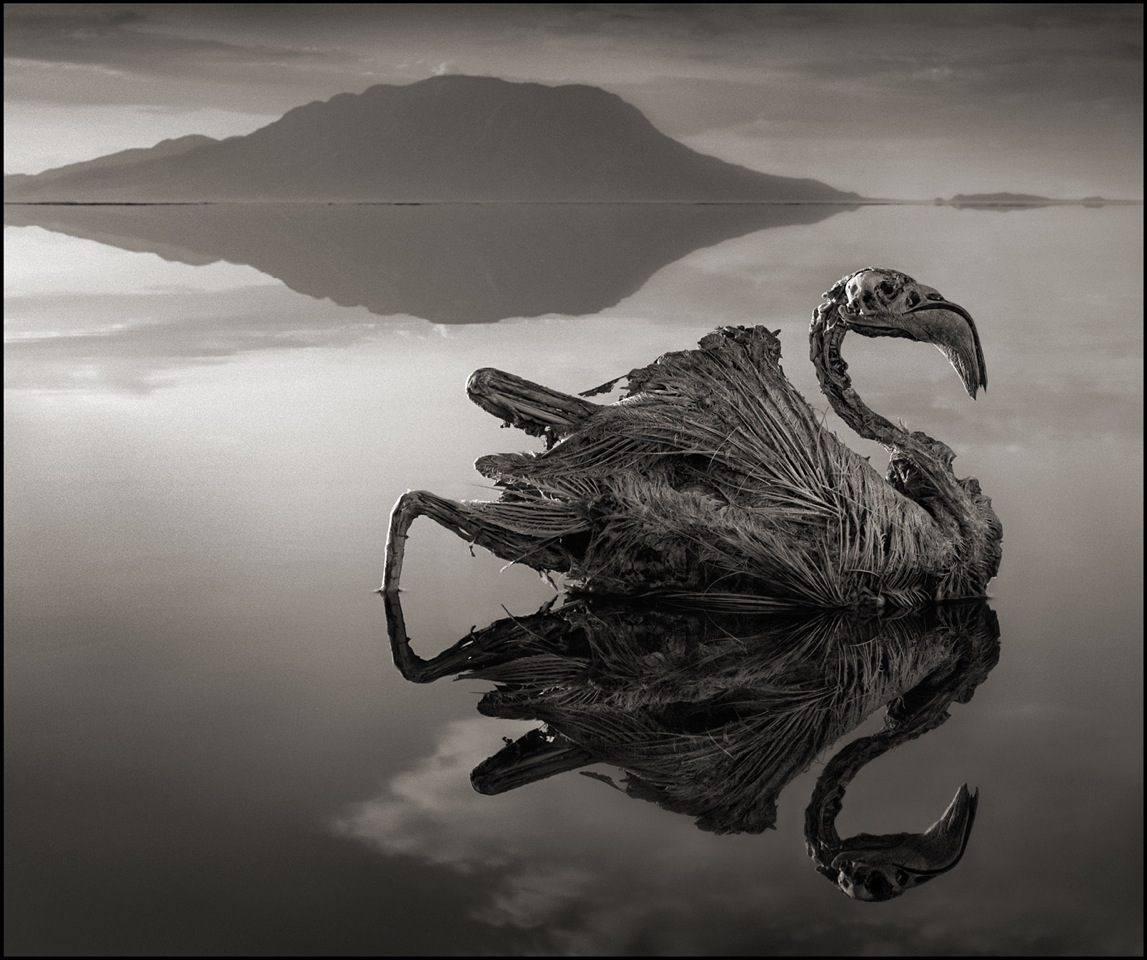 While exploring stark areas of East Africa in 2010, photographer Nick Brandt stumbled upon an amazing site. Perfectly preserved remains of birds, fish, and bats lay strewn around the shores of Lake Natron in northern Tanzania.

"Discovering them washed up along the shoreline of Lake Natron, I thought they were extraordinary -- every last tiny detail perfectly preserved down to the tip of a bat's tongue, the minute hairs on his face. The entire fish eagle was the most surprising and revelatory find," Brandt told CBSNews.com in an email.

The dead animals were all victims of the shallow lake's lethal combination of high temperatures and salinity. The lake's average temperature is 80 degrees Fahrenheit, but it can spike as high as about 140 degrees.

The only animal species that can survive below the lake's surface is a fish called alkaline tilapia (Alcolapia alcalica), and it can live only along the edges where the water is less salty. Bacteria have also adapted to the deadly waters.

Other species are able to survive as long as they do not completely submerge. Salt islands within the 12-by-30 mile lake are actually the only breeding ground used by lesser flamingoes (Hoenicopterus minor). But as Brandt's photos show, even the flamingoes sometimes fall victim to the lake.

Lake Natron takes its name from natron, a mineral often referred to as sodium carbonate decahydrate. Records show that ancient Egyptians used this natural salt to dry out organs during the mummification process.

Natron made its way to the lake through volcanic ash from Ol Doinyo Lengai, a Rift Valley volcano just south of the lake. Ol Doinyo Lengai is the only volcano on the planet that spits out natrocarbonatite lava, which is rich in sodium and potassium carbonates, nyerereite and gregoryite. In other words, it's much saltier than the more common silicate-rich lava.

Ol Doinyo Lengai has erupted at least eight times since measurements were first recorded in 1883, and lava has been flowing since the 2007 eruption. When the lava's natrocarbonatites mix with rainwater, they run into the lake, where they spike the lake's salinity. Then, just as happened with organs during mummification, the natron preserves the remains of animals brave enough to dive into the lake.

Scientists do not know what entices birds and bats to plunge into the deadly water. Brandt said that it is likely that they are confused by the lake's "extreme reflective nature." He compared the situation to birds flying into glass windows.

While photographing the animal remains, Brandt decided to position them into more familiar stances, perching them on tree limbs over the water.

I took these creatures as I found them on the shoreline, and then placed them in 'living' positions, bringing them back to 'life', as it were. Reanimated, alive again in death.

His work is currently on display at the Hasted Kraeutler Gallery in New York City and will be published in the photobook, "Across The Ravaged Land".