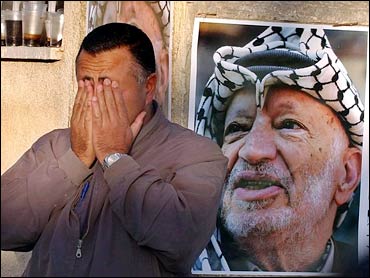 From the West Bank to the Gaza Strip, to the sleepy streets of Cairo and the refugee camps of Lebanon, on to Jerusalem, Washington and around the world, there is a sense that however his life is judged, the death of Palestinian leader Yasser Arafat is a solemn and historic moment.

"Another Abdel Nasser has died," said taxi driver Mahmoud Ibrahim, in Cairo, comparing the Palestinian leader to the towering Arab nationalist who ruled Egypt from his 1956 coup until his death in 1970.

Arafat's death at a Paris hospital, long expected after he flew to France for treatment of a mysterious illness late last month and soon after fell into a coma, was announced about 6 a.m. in the Middle East. Cairo's normally hectic streets were quiet, but Ibrahim was at work, driving through the early morning haze.

Ibrahim said his own president's death would not have saddened him as much as Arafat's passing. While Arafat claimed he was born in Jerusalem, researchers say his birthplace was Cairo, where he went to university and where his PLO was founded.

"He was a man with a cause, and he carried it in his heart everywhere," Zaki added.

"Yasser Arafat spent his entire life for the Palestinian cause. We pray that his mission is completed after his death," Pakistani Information Minister Sheikh Rashid Ahmed told The Associated Press from Saudi Arabia, where he was performing the Muslim pilgrimage.

Israeli Prime Minister Ariel Sharon issued a statement that did not mention Arafat's name but did say "recent events" could bring about a "historic turning point in the Middle East... Israel is a country that seeks peace and will continue its efforts to reach a peace deal with the Palestinians without delay."

Sharon expressed hope that the Palestinians would work toward "stopping terrorism," which he said was a precondition for dialogue and reaching a peace deal.

In Washington, President Bush called Arafat's passing "a significant moment in Palestinian history." Mr. Bush, who has accused Arafat of blocking peace with Israel, conveyed his condolences to the Palestinian people.

"We hope that the future will bring peace and the fulfillment of their aspirations for an independent, democratic Palestine that is at peace with its neighbors," said President Bush, the first U.S. president to publicly call for an independent Palestinian state.

British Prime Minister Tony Blair, expressing his condolences to Arafat's family and to the Palestinian people and noting that Arafat was a Nobel Peace laureate, also looked ahead.

The "goal of a viable Palestinian state alongside a secure Israel is one that we must continue to work tirelessly to achieve," Blair said in a statement read by a spokeswoman. "Peace in the Middle East must be the international community's highest priority. We will do whatever we can, working with the U.S. and the EU, to help the parties reach a fair and durable settlement."

French President Jacques Chirac, who had visited Arafat days before his death, called him a "man of courage and conviction who, for 40 years, has incarnated the Palestinians' combat for recognition of their national rights."

Plaudits came from as far away as China, where President Hu Jintao said Arafat was "an outstanding leader of the Palestinian cause and he was an outstanding politician."

Japanese Prime Minister Junichiro Koizumi praised Arafat's efforts on behalf of peace and his people, citing his signing of the 1993 Israel-PLO accord that gave him control of most of Gaza Strip and 27 percent of West Bank.

"He was indeed a pioneer who had laid out the foundation for the establishment of a Palestinian state," Koizumi said.

Ordinary Palestinians shouted their sentiments in the cities and refugee camps where Arafat was revered as a hero.

In Gaza, tens of thousands of mourners poured into the streets clutching Arafat photos and flags, and waving headscarves like the one he wore. Children ran through the streets, promising to carry out their leader's legacy. And black smoke rose everywhere - from tires lit on fire.

Sami Abu Zuhri, Hamas's spokesman in Gaza, called on the group's supporters to honor Arafat and work toward national unity.

"We lost by his death one of our great symbols and one of the main focuses of our national struggle and identity," said Abu Zuhri.

Islamic Jihad spokesman in Gaza Nafez Azzam said "with hearts full of belief in God's will we mourn President Yasser Arafat who was a great leader for the Palestinian people."

In the Jebaliya refugee camp, Gaza's largest, university students and supporters of Arafat's Fatah movement gathered in shock and sadness after learning of his death in a Paris hospital.

"Yasser Arafat is inside in our hearts - in the hearts of the real nation of Palestine," said Amar Muheisen, 22, from Gaza City as he beat his chest with his fists. "Yasser Arafat will never die."

Palestinians huddled around radios on street corners as loudspeakers from mosques amplified verses from the Quran. Loudspeakers mounted on trucks blared Arafat's most famous quotes.

Gunmen fired into the air - some only 500 yards from Jewish settlements. No clashes were reported amid a mood more of grief than outrage.

In Lebanon, in the refugee camps of Ein el-Hilweh and Mieh Mieh, burning tires spewed heavy black smoke and guerrillas fired into the air, rites of mourning that expressed frustration as well as sadness.