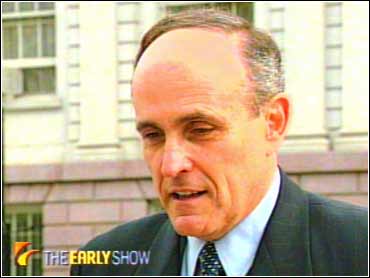 Rudy Giuliani's stunning announcement that he is seeking a separation from wife Donna Hanover brought to light long-whispered rumors about the mayor's troubled marriage. Here are profiles of the women at the center of Giuliani's latest personal - and political - scandal:

New York's first lady has generally shied away from the political spotlight. In recent years, she's seldom appeared in public with her husband, as rumors of their marital turmoil ran rampant. On Wednesday, they both confirmed - in separate, dramatic news conferences - that after 16 years, their marriage was coming to an end.

Speaking outside Gracie Mansion, the mayoral residence, she said, "Today's turn of events brings me great sadness. I had hoped that we could keep this marriage together."

Hanover, 50, had been in the headlines lately after announcing she would star in a sexually charged play, The Vagina Monologues. She subsequently canceled her role when the mayor reported he had been diagnosed with prostate cancer.

The California-born Hanover is a graduate of Stanford University and the Columbia School of Journalism. She was an anchorwoman at New York's WPIX-TV and a correspondent on WNYW-TV's Good Day New York. She also hosted a program for the Food Network.

An occasional actress, Hanover has appeared in a number of television dramas including The Practice, Law and Order, Family Law and Ally McBeal. Her best-known role was as Jimmy Carter's evangelist sister, Ruth Carter Stapelton, in the film The People vs. Larry Flynt.

Hanover and Giuliani have two children, Andrew, 14, and Caroline, 10. She says she and the children will continue to live at Gracie Mansion for the immediate future.

The mayor's current companion is Judith Nathan, a drug company executive and Upper East Side divorced mother of a teen-ager.

Nathan and Giuliani have been spotted together around the city and in the Hamptons. She even walked with his entourage in the St. Patrick's Day parade - a role usually assumed by the mayor's wife.

A New York Post photograph of the couple leaving an East Side restaurant prompted questions that led to the mayor's admission last week that Nathan was, in fact, a special friend.

On Wednesday, Giuliani called Nathan "a very, very fine person." He said he would "need her more now than maybe I did before," as he cnfronts prostate cancer, a crumbling marriage and questions about his political future.

The two reportedly met last year at a function at their childrens' private school.

Nathan was born Judith Stish in the blue-collar town of Hazelton, Pa. The daughter of a former newspaper circulation worker, she became a certified nurse in 1974 and married businessman Bruce Nathan five years later.

The Nathans' marriage ended in a divorce that included a dispute over custody of their now 15-year-old daughter.

In spite of the media spotlight, she guards her privacy jealously, saying only that she's concerned about the mayor's health.

At her news conference, Hanover didn’t mention Lategano by name, but said, "For several years, it was difficult to participate in Rudy's public life because of his relationship with one staff member."

In 1997, Vanity Fair magazine reported there was a romantic link between Lategano and Giuliani. Both denied the report and it was never confirmed.

The Brooklyn-born Lategano was appointed Giuliani's press secretary in 1993 at the age of 28 - the youngest person and only the second woman ever to hold that position in New York. She left her City Hall job in May 1999 and is currently the director of the New York City Convention and Visitors Bureau. In February, she married Nick Nicholas, a sportswriter at the Sun News in Myrtle Beach, S.C.

In response to Hanover's remarks, Lategano said: "I have no desire to speculate why Donna Hanover decided to issue the statement that she did. Understandably, this is a difficult time. I wish both the mayor and Donna Hanover a successful resolution."