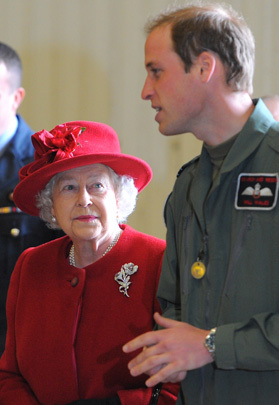 The royal family is not known for its public displays of affection. In fact the Brits in general could learn a thing or two from the Italians when it comes to professions of love, but we're still in an age where it's considered a tad unseemly to show that you feel anything other than moderate interest.

After all, we wouldn't want to make a fuss. At most you're lucky to get a pursed lips air kiss that still manages to miss your cheek entirely - what a tease - or of course a stiff handshake. However, the last few days have provided a veritable rush of royal love, not through their actions; we wouldn't want to get too carried away, but by their words. Words you wouldn't expect from Britain's first family.

Camilla, the Duchess of Cornwall, kicked things off at a public engagement 10 days ago when she said that Kate was a lovely girl and that they were lucky to have her. Now while this might seem like a pretty middle-of-the-road comment from a future mother-in-law, it's a treasure trove of approval when it comes from within the royal circle.

Hot on Camilla's heels, in a recent interview, Harry was positively gushing when it came to the topic of his future sister-in-law. He could have simply been trying to keep warm as he was getting ready to set off for the North Pole, but still, he said what a fantastic girl she is and that Kate and William are a perfect match. You don't get a much better seal of approval than that.

We did see one member of the royal family in action, though, and it was none other than the CEO herself. The Queen was in fine form last Friday when she paid a visit to RAF Valley in Anglesey, North Wales, to see William at work. I was there, and when I say it was windy you can consider it the understatement of the century.

Nevertheless, even with winds of 50 miles per hour the Queen appeared to be having a ball. William greeted his grandmother with a kiss and a customary bow, before following up with a quip about her losing her hat. Clearly this is a relationship where there is a definite mutual affection and it was charming to witness. The Queen adores Prince William and I'm sure she's very proud of his achievements.

All in all, I would say the royal family is greatly enjoying this resurgence in their popularity. There appears to be a renewed optimism and it's wonderful to see it playing out amongst the family itself. Keep it up, Windsors; you've got nothing to lose and everything to gain.

Now if we could just get a kiss from the newlyweds, on the balcony of Buckingham Palace, post wedding, we'll have hit the royal jackpot.