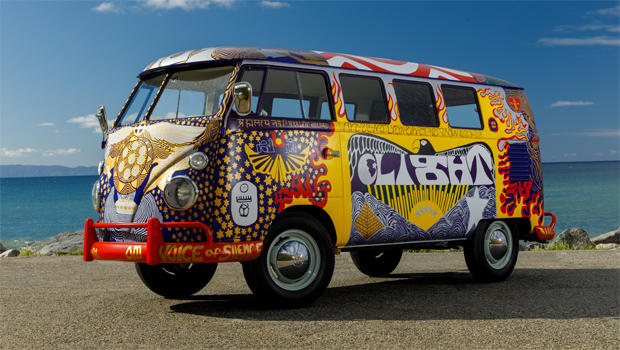 What's psychedelic, went from zero to 60 mph in less than 40 seconds, and could pack in a touring band AND a sizable audience? A Volkswagen Type 2 microbus, or at least one very special example of it.

In August 1969 a VW bus which had been painted in colorful fashion by Dr. Bob Hieronimus was immortalized by an Associated Press photographer, who captured it at the mass of humanity known as Woodstock.

The bus, a 1963 11-window Deluxe, was covered in symbols and languages, with a dollop of astrology, a sphinx, heavenly bodies, and the Hindu diety Vishnu, conveying messages of hope and enlightenment. The image became as representative of that towering counterculture moment as any musical act, while VW buses would become synonymous in the public imagination with a hippie, anti-establishment, off-the-grid aesthetic.

But the Woodstock VW, which came to be known as the "Light Bus," fell off the grid itself. After its use as the workhorse of a commune, it was traded in at a mechanic's shop, and then lost to history.

As the 50th anniversary of the Woodstock festival was approaching, Hieronimus and Canadian documentary filmmaker John Wesley Chisholm sought to locate the Light Bus and, if required, restore it to its 1969 appearance.

Their quest through mechanics' shops, VW enthusiast meet-ups, and auto graveyards became the launching point of a new documentary film, "The Woodstock Bus," premiering this month.

Chisholm's film, made over a span of three years, is part-sociological history of auto fandom, part-detective story, and part-home improvement series, as the trail of the original Light Bus is tracked across the Eastern U.S., employing a private detective and a psychic along the way. As the clues grew thinner and dimmer, a Plan B was enacted: find a VW bus of the same make and model, restore and paint it to match the original, and christen it Light Bus 2.0.

Easier said than done, even with the support of a Kickstarter campaign. There are only so many 1963 VW 11-window Deluxes that haven't been salvaged or turned into a pile of rust in a weed-infested field.

After finding an appropriate vehicle, the project moved to Vacaville Auto Body Center in California, where VW restoration specialist Robert Skinner and his team rebuilt the automobile's engine, transmission and transaxle.

It was then transported to Maryland, where Hieronimus and his fellow artists painted the bus to match its forebear. Then, down to Augustine, Fla., and East Coast VW Restorations, for interior and exterior detailing.

The new Light Bus was unveiled in March, proving the spirit of Woodstock is still very much with us.

Where to see the VW Light Bus:

The bus, along with Dr. Bob Hieronimus, will be guests of a launch party at the American Visionary Art Museum in Baltimore on August 12., before heading to Bethel, N.Y. for the Golden Anniversary of Woodstock. It will be on display at the Bethel Woods Center for the Arts August 14-17.