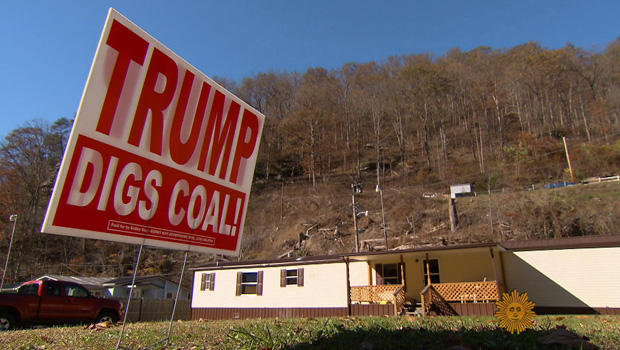 The election is over, but not before revealing a nation sharply divided, both demographically and geographically. To find out why one corner of our country voted as it did, Senior Correspondent Ted Koppel traveled deep into the heart of Trump Country:

McDowell County, West Virginia, echoes to the sound of “used to be’s.”

There used to be a hundred thousand people in the county.  Used to be.  Back when the coal mines ran three shifts a day. That’s another used to be. Automation cut back the work force.  Machines replaced men. That was already an issue back in 1960, when John F. Kennedy was campaigning here:

Coal Miner: “What are your plans for the situation existing in the coal mines in West Virginia?”
Kennedy:  “I think there are at least four or five things the government can do.  First is the area redevelopment bill.”

JFK carried the county, and the state.

Folks here used to be staunch Democrats. Used to be.

“Well, I graduated from high school over here in 1973 and it was bustling then,” said Sheriff Martin West. “The streets were full, the businesses were here, and then I got laid off in ‘82. That’s when the bottom went out.”

McDowell County today, says Sheriff West, is in desperate straits. “This county was one of the most prosperous in the state at one time,” he told Koppel. “These were the billion-dollar coalfields, and they were just enjoying the richness of it. And now we’re on the bottom and we’re being totally neglected.”

Most of the mines are closed now, and the county’s down to fewer than 19,000 residents -- too many of those on welfare and food stamps. Unemployment is more than double the national rate. And there is the property that “used to be” a Walmart.

So, when the voters went to the polls last Tuesday …

Trump: “You look at our miners; Hillary Clinton wants to put all of the miners out of business.”

“I’d say 90-percent of West Virginia will vote for Donald Trump,” said one voter. “Ain’t gonna say he’s a savior.  If we do have a chance, he could possibly help us out.”

Donald Trump swept West Virginia, and trounced Hillary Clinton in McDowell County by almost four to one (4,614 votes to 1,429).

Koppel asked, “You really think things are going to change?”

“I think that he can help us, yeah,” replied Sheriff West. He used to work in the mines. Then he spent seven years at a processing plant where they cleaned and sorted the coal that fired the furnaces at U.S. Steel. It’s shut down now.

“They put all these regulations onto us from Washington, and the mines is trying to operate,” said Sheriff West. “The people is counting on that in order to feed their family, to pay their bills and obey the regulations that we have. But they keep putting more regulations upon us.”

The Sterling Drive-In, established in 1945, is one of the only places left that hasn’t shut down. It’s a good place to talk.

Koppel asked a group of residents, “I want you folks to tell me why it is that people down here in McDowell County were so much smarter than everybody in New York, Washington and Los Angeles, and Chicago. What did you know that we didn’t know?”

“Really, to me, Donald Trump is probably the only way this county, and let alone state, is gonna survive,” said Brandon Burks, a correctional officer at Stephens Correctional Center. “I mean, we’ve always been a coal county.”

Koppel asked, “Is Donald Trump going to be able to make a difference? Is the coal industry ever gonna come back?”

Ed Evans, a science teacher who was recently elected to the Western House of Delegates, said, “It’s not gonna come back to where it was.  I don’t think we’ll see [that] level, but I think we’ll see some return of coal.”

Eddie Asbury is President of Southern Minerals Coal Company, which has seven coal mines, three of which are shut down. “It’s not a United States market or state market or a county market, it’s a world market. We gotta compete in the world, in the world.”

“And you think Donald Trump’s gonna be able to do that?” Koppel asked.

“I do believe he will. And I’ll be honest with you, I’ve been Democrat all my life. All my life.”

Leroy Johnson used to work in one of Eddie Asbury’s mines. But when it comes to politics they part ways.

“I voted for Hillary because she was more experienced and she was talking about more of the policies that we need, and the things that we need to work on,” he said. “Donald wasn’t talking that. He was just throwing words out there, giving people what they wanted to hear. And I didn’t think that was right.”

Kristen Mitchem, an unemployed single mother of three young children, did not vote.

“Why the hell not?” Koppel asked.

“I felt that this was the most ridiculous election I’ve ever witnessed in my life,” Mitchem said. “I know I’m young, but they went about it the most childish way I think someone ever could. Through the whole election I never heard either party talk about the lower class. I’m lower class. They’re worried about middle class and higher class.”

“You were born here?”

“I was born and raised here.”

“So you know a lot of people your own age?”

“Is there a lot of desperation?”

“There truly is. I would never have imagined in my life that I would be in this kind of position,” Mitchem replied. “I don’t wanna leave my home. But I feel as if I’m being forced out of my home because there’s nothing here anymore.”

Delores Johnson, Leroy’s wife of nearly four decades, and the President of the McDowell County Chamber of Commerce, nodded her head.

Koppel asked, “You see a lot of this?”

“The nuclear family in McDowell County is really broken down,” said Evans. “We have somewhere in the high 40 percent of kids that do not live with their natural mothers and fathers. Most of them will go off to find jobs in other places. They’ll mail money back to grandma who takes care, or Uncle Bill, who takes care of the kids.”

“What’s coming out of this community to me is that a lot of people voted for Donald Trump because they felt, ‘What the hell? What have we got to lose?’” said Koppel. “Do you buy that?”

Evans added, “We have nowhere to go but up.”

There’s a little disagreement about when McDowell County held its first Veterans Day Parade -- either 1918 or 1919 -- but it’s one of the oldest in the country.

This last Veteran’s Day, Friday, was picture-perfect. The parade came down McDowell Street and you could barely notice all the shutdown stores. There was a flavor of what it must have been like.

Not everyone, but most people, seemed ready to give their President-elect a real chance.

“The voters of McDowell County gave Donald Trump a four-to-one margin of victory, I think ‘cause he said he’s going to bring the coal industry back,” said Koppel. “You think he can do it?”

“I think he can do anything he said he could do,” one woman said. “He’s that good.”

With the kids chanting their thanks to the veterans, and the high school bands, and the crowds lining either side of the street, you almost had a feeling of how it used to be.