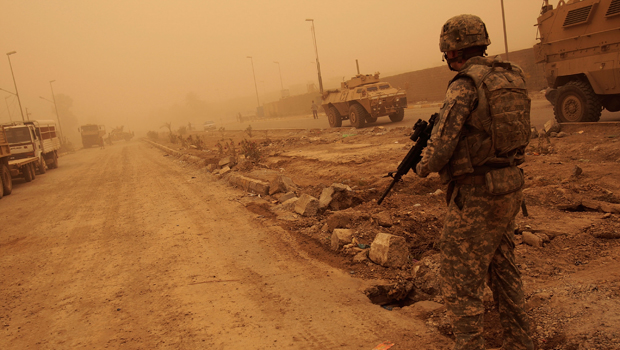 The Pentagon says a U.S. Marine was killed yesterday by an ISIS rocket in northern Iraq. The attack occurred on the eve of an anniversary that many people might overlook . . . but which Iraq War veteran Matt Gallagher has not:

Something for the history books? Not yet. Everything happening in that region -- from ISIS to airstrikes to Delta Force raids -- is connected to that decision, and the subsequent nine years of war and occupation.

According to recent polls, more than half of Americans support a ground invasion against the Islamic State. The same number would bar Syrian refugees from entering the U.S. That a ground war against ISIS would lead to substantially more refugees doesn't seem to matter -- and that such an invasion would ethically and legally be followed by a lengthy occupation also seems inconsequential, somehow.

Another recent poll revealed that 60 percent of 18- to 29-year-olds (military-age Millennials) support American combat operations against ISIS; nearly the same percentage would never join the fight, though, even if they were needed.

For too many Americans in 2016, war isn't a dire act turned to once all other options have been exhausted. It's a narcotic, a quick fix, something that happens in strange, faraway lands, where other people's sons and daughters do violent things for country.

As an Iraq veteran who spent a formative time in dusty, sectarian towns north of Baghdad, I've long wondered if America pays attention to its foreign affairs. These ugly contradictions and paradoxes don't help with that.

Which brings me to the presidential primaries.

We're a republic; citizens can support whomever they choose. But when legitimate candidates running for commander-in-chief suggest war crimes should be allowed, or that carpet-bombing makes for sound military strategy, I find myself wanting to find the supporters of these candidates and ask: "What if your son or daughter were given those missions? Would you still cheer?"

The divide between America and its military is vast. This should disturb us all, soldier and citizen. Republics don't behave like this.

Thirteen years after Iraq, it's the least we can do.