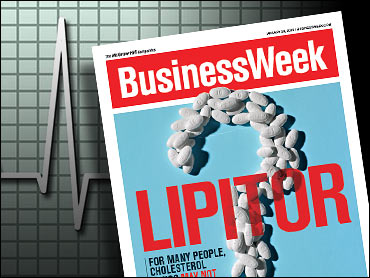 A new class of prescription drugs burst on to the scene over the last 15 years called statins designed to lower cholesterol. They're now taken by more than 18 million americans. And statins are a $21 billion industry. But do all the people taking them really need to be? CBS News teamed up with BusinessWeek magazine to investigate.


As an architect, David Mullican specializes in unique designs for beachfront homes. So when his doctor told him to take lipitor to treat his high cholesterol, he had a better idea.

"I didn't want to do a prescription medicine so I was going to try to figure out a way around it," Mullican said. "I took the prescription home with me but I never filled it."

Our national obsession with cholesterol numbers has led to us to depend on statins as the easy way to fight heart disease - and why not?

It's hard to ignore ads. One advertisement is for Lipitor, the most popular statin on the market. But if you look into where this number - the 36 percent reduction in heart attacks comes from - you'll find out that benefit may not be as dramatic as you think.

The study in the ad split people into two groups. For over three years, one group took Lipitor, the other took a placebo. For every 100 people in the placebo group, there were three heart attacks; in the Lipitor group there were two. That means that 100 people had to take Lipitor for more than three years to spare just one person from a heart attack.

Statins do one thing extremely well. They lower cholesterol - especially bad cholesterol - and the science tells us there's one group of people who definitely should be taking it.

"In people with known heart disease, this has become a standard of care, that you really need to be on a statin," said Chris Cannon.

But what about the millions of people with elevated cholesterol who are taking statins but have no heart disease or other risk factors? Here's where the controversy heats up.

"We have no evidence that taking a cholesterol-lowering medication like a statin will prevent them from getting heart disease," said Elizabeth Nabel, director of the National Heart, Lung, and Blood Institute. Dr. Nabel oversaw government guidelines that say don't consider statins in patients with low risk factors unless their bad cholesterol is over 160. That hasn't stopped the statin craze.

FYI: How to lower cholesterol without medication.
BusinessWeek: Do Cholesterol Drugs Do Any Good?

Even though guidelines say don't use statins in patients with low risk factors unless their bad cholesterol goes over 160, in the real world, many doctors prescribe statins anyway.

"We have been perhaps driven too quickly into this sort of assumption and this model, that it's all about the cholesterol number and if we can just lower that number, everything is better," Dr. Howard Brody said.

But statins have side effects and cost money. What's more, they may give a false sense of security. Statin users may be tempted to neglect other risk factors, like high blood pressure, lack of exercise, and poor diet.

"Doesn't a guy like me want to believe that I can have a greasy cheese burger with fries, extra fries, and then if I swallow this pill everything will be great," Brody said.

David Mullican's approach paid off. He lost 30 pounds and lowered his cholesterol, without a pill.